0
Our eshop is open, deliveries are ensured and more than ever our customer service is at your disposal. Take care of yourself.
My account My cart 0

Squadron 303 Vodka:
A Taste of History

Travel back in time near Saint-Germain-des-Près! At number 69 rue de l’Université stands the officers’ mess for Squadron 303: four friends united by their passion for spirits. Their speciality is potato vodka – the same as that produced by the legendary Polish air squadron that served in the Royal Air Force. These former advertising executives have chosen the motto “Optima in Historiae” [Latin for “Take the Best from History”] and are working to serve the most veteran of taste buds. Their creation is a slender hip flash-inspired bottle so beautiful that it was named Design of the Year at the British Glass Awards. This beverage can be admired just as much when safely ensconced in its bottle as when drunk. Slowly. The opposite of how it is produced. Hugues Cholez, Franck Botbol, Baptiste Massé and Alain Camagie used history as their creative foundation when coming up with their product. In designing Squadron 303 Vodka, these diehards’ master distiller had to apply the very restrictions to which the soldiers of the period would have been subject. This meant making alcohol using King Edward potatoes distilled once in small stills rather than being filtered. Whether drunk in its pure form, at ambient temperature or in a cocktail, the vodka offers something of a gustatory smack with a slightly brioche-like flavour reinterpreted like a gin or whisky. Seated comfortably in a captain’s chair and holding a Polish Heroes, we take in the incredible location in which we find ourselves. Items dating from the Second World War are all around in a blend of Victorian classicism and Art Deco modernism. It’s enough to convince you that you’re actually there. Discover without delay. 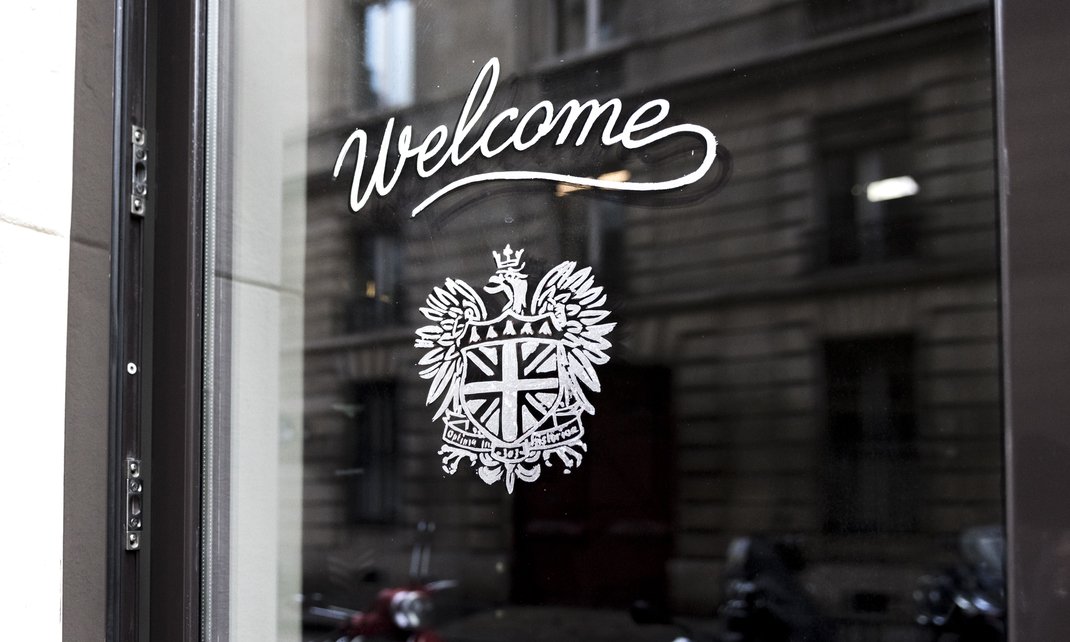 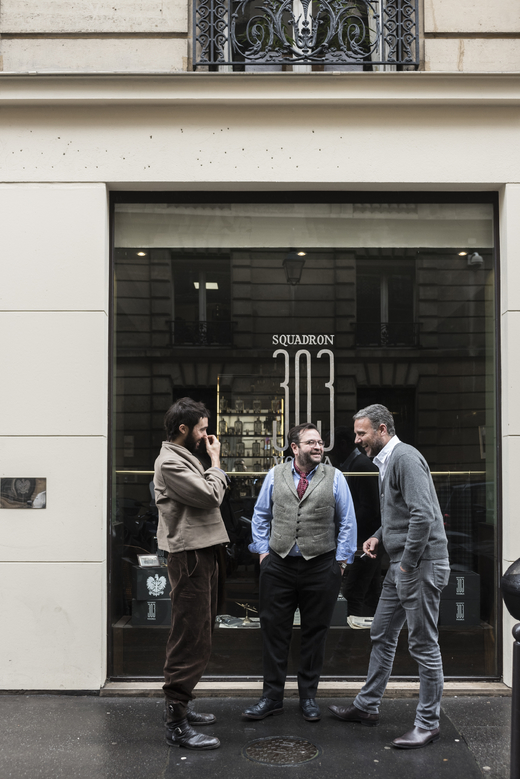 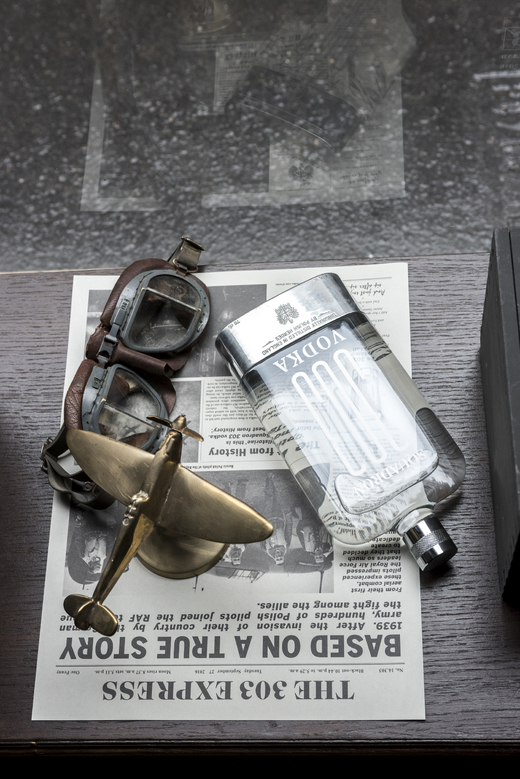 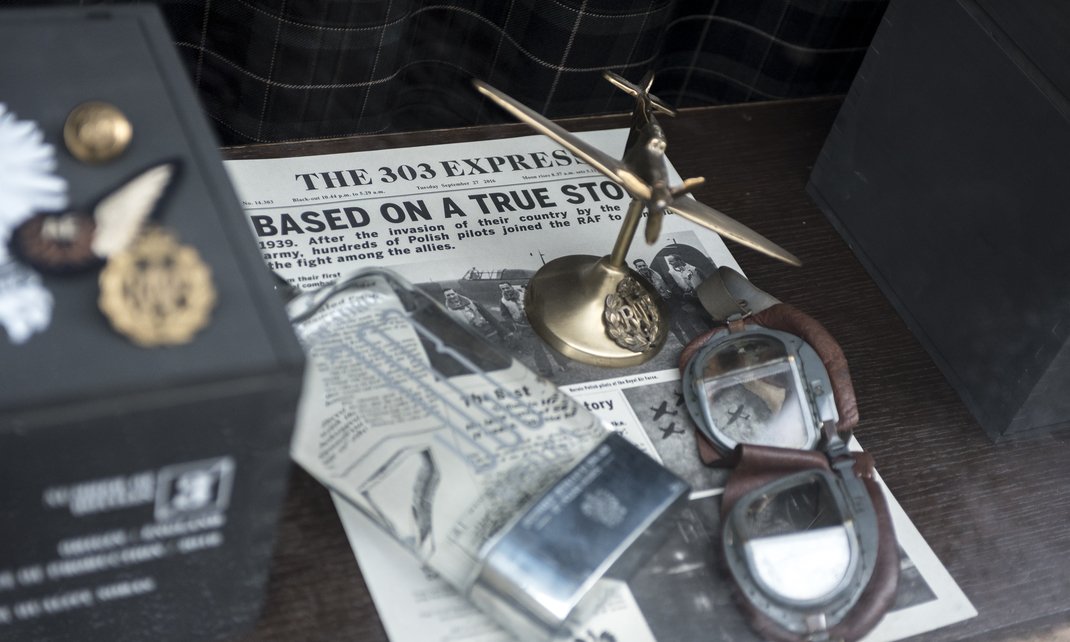 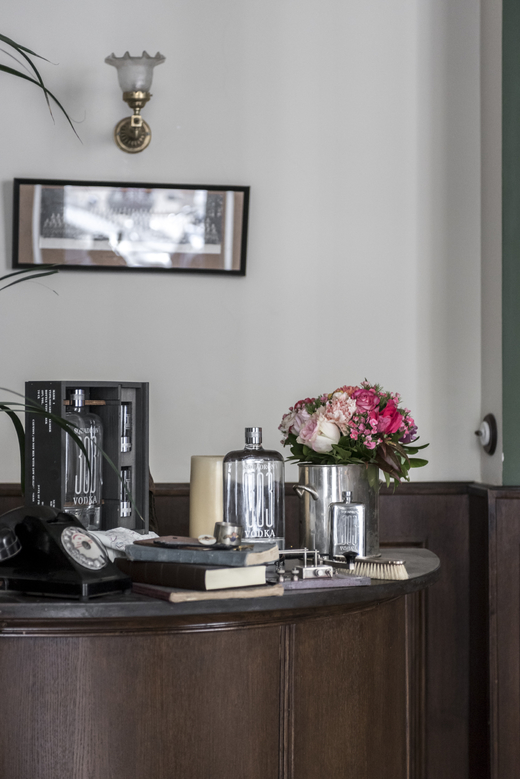 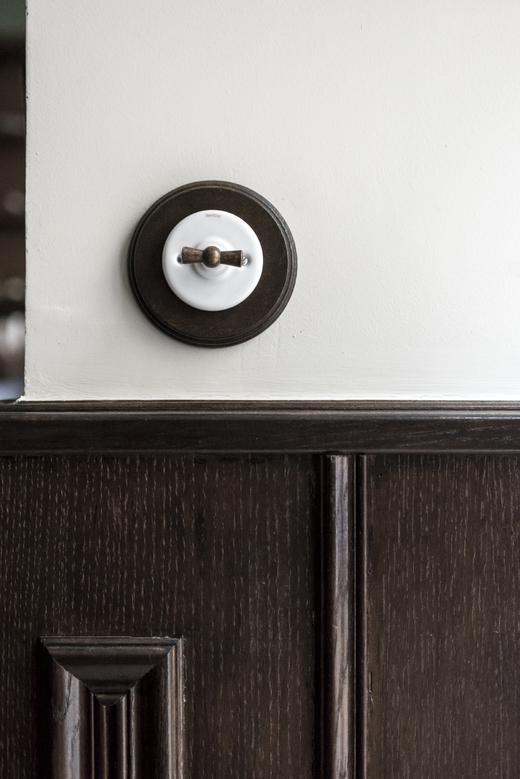 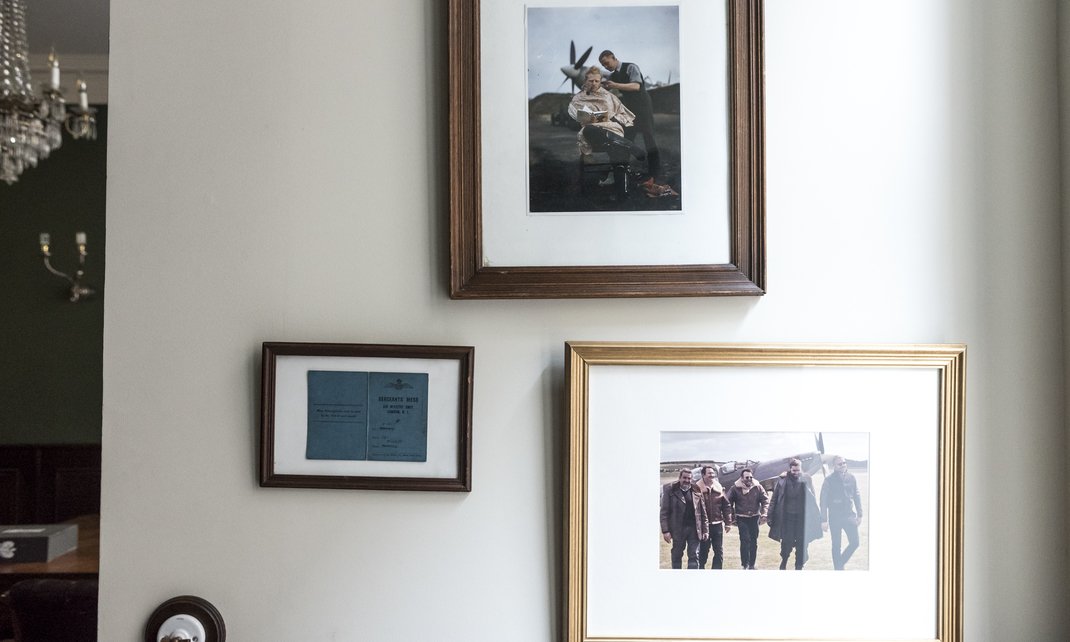 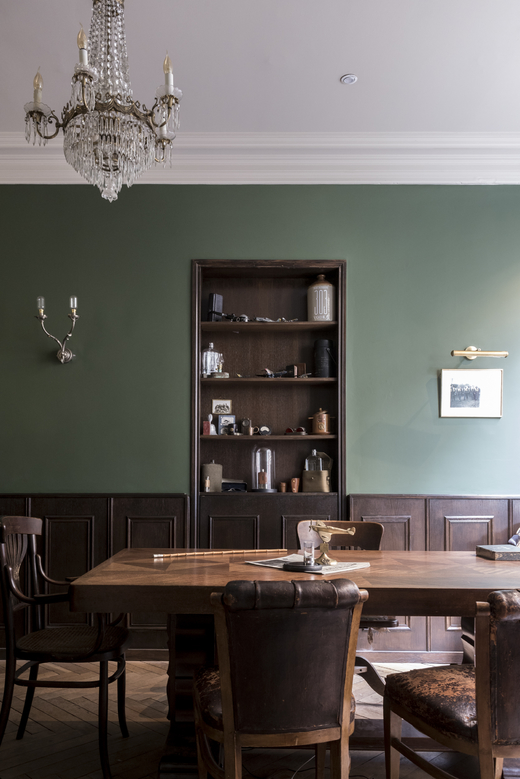 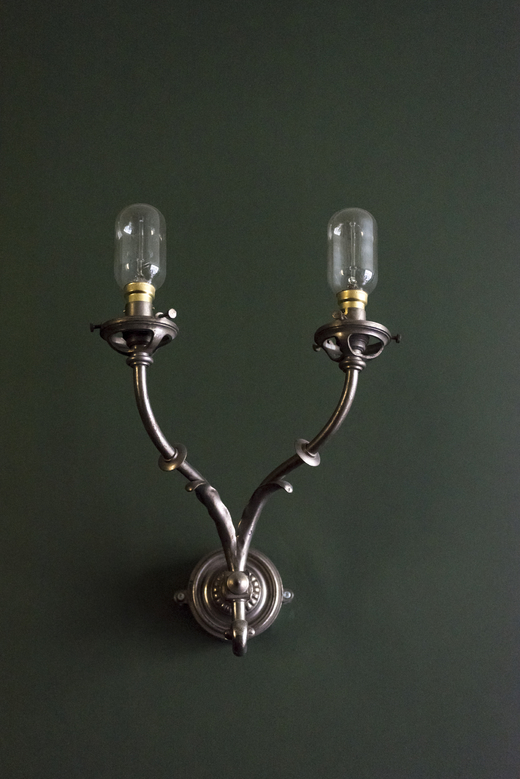 Hugues, Franck, could you tell us about your backgrounds before you started your Squadron 303 venture?

I met Franck in 2001. I was setting up a viral marketing department in France in a media agency. After a few campaigns that attracted attention, we decided to enter into a partnership to set up the Arthur Schlovsky Digital Studio within the WPP Group. Following that, we were called upon by TBWA to lead their digital department. Two years later, we became creative directors for TBWA in Paris.

At TBWA Paris, we worked for brands in the Pernod Ricard Group, including Martell cognac. I was fascinated by the history of this 300-year-old brand. It was so exciting to experience the first orders placed with Martell, dating back to the 18th century, and learning about the origins of this legendary producer. It was at that time that the idea of launching our own spirit brand began to form.

How did you learn about the history of Squadron 303?

I’ve always been passionate about aviation history in general, and the history of the Royal Air Force (RAF) in particular. Growing up, I became a collector of memorabilia from RAF pilots, particularly flight logs where pilots scrupulously recorded their everyday lives. The log that made the biggest impression on me came from Squadron 303, a legendary squadron of Polish pilots who decided to join the English forces to continue fighting after their country had been invaded. Having left their country in a disastrous state, and receiving a fairly frosty welcome from the RAF, their sacrifice led them to become the most successful squadron in the Battle of Britain. I had my lightbulb moment when I bought a flask, which belonged to Walerian Zak, one of Squadron 303’s pilots, at an auction. Intrigued by this item, I learned that some Polish pilots followed a tradition from their home country, distilling their own artisanal vodka. I talked about my idea with Hugues and two close friends, Baptiste Massé and Alain Camagie. They both joined me in my venture and a year later, all four of us founded the Squadron 303 vodka brand.

Why did you want to resurrect this story in particular?

We recognised the immense narrative potential that this historic story provided to us, embodied by some truly extraordinary people, sharing timeless value and with a unique visual appeal. The identity is that of the RAF. Their uniquely refined elegance was defined by the practical necessities of the era. It also formed the basis of the style we created for the graphical design of the Squadron 303 vodka brand. 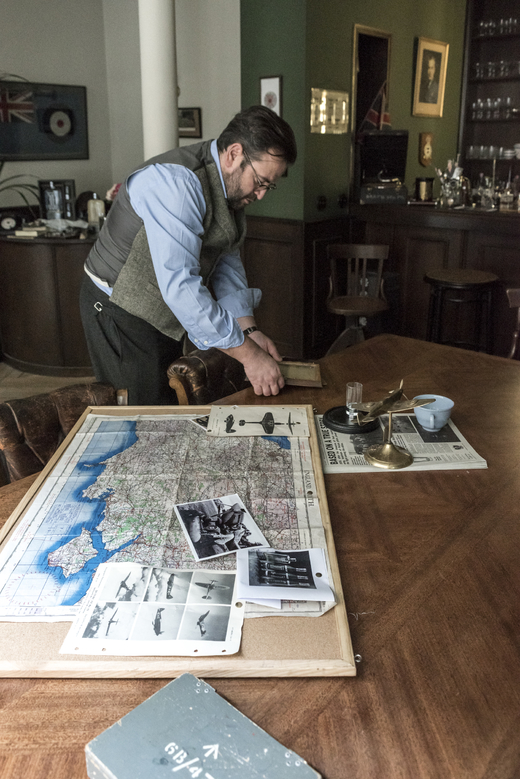 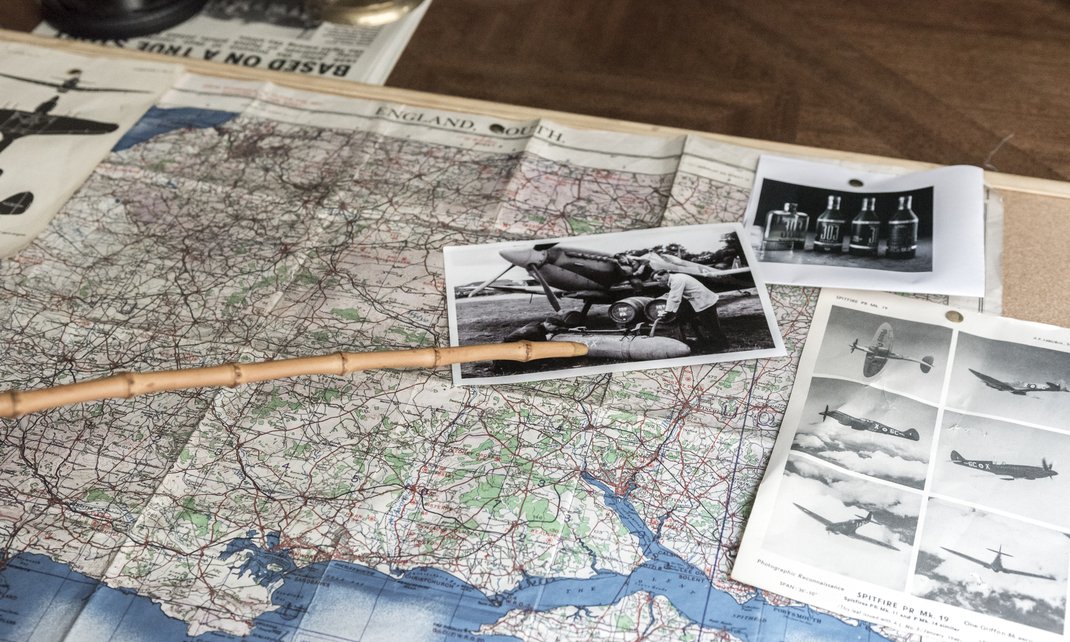 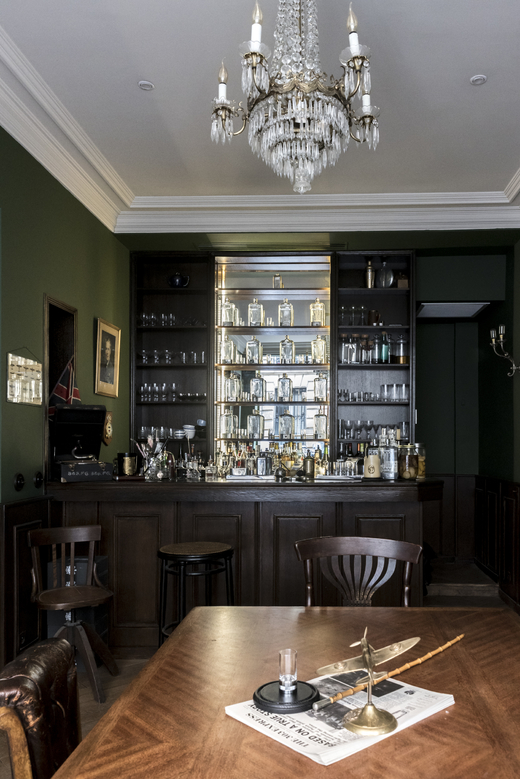 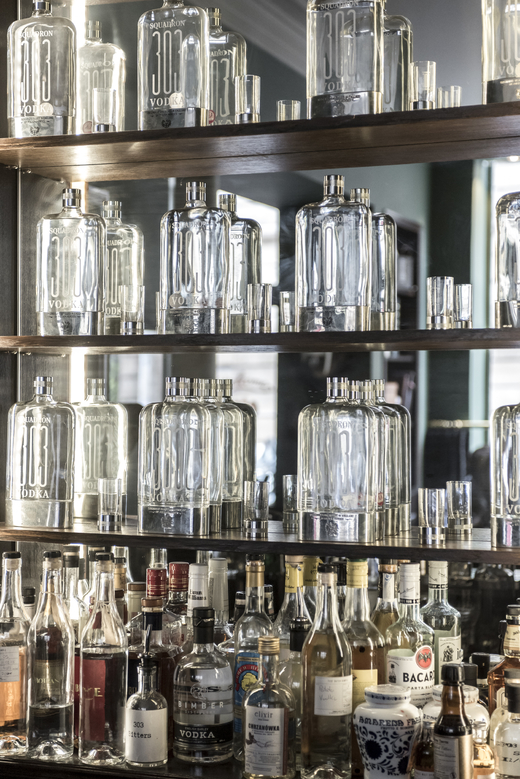 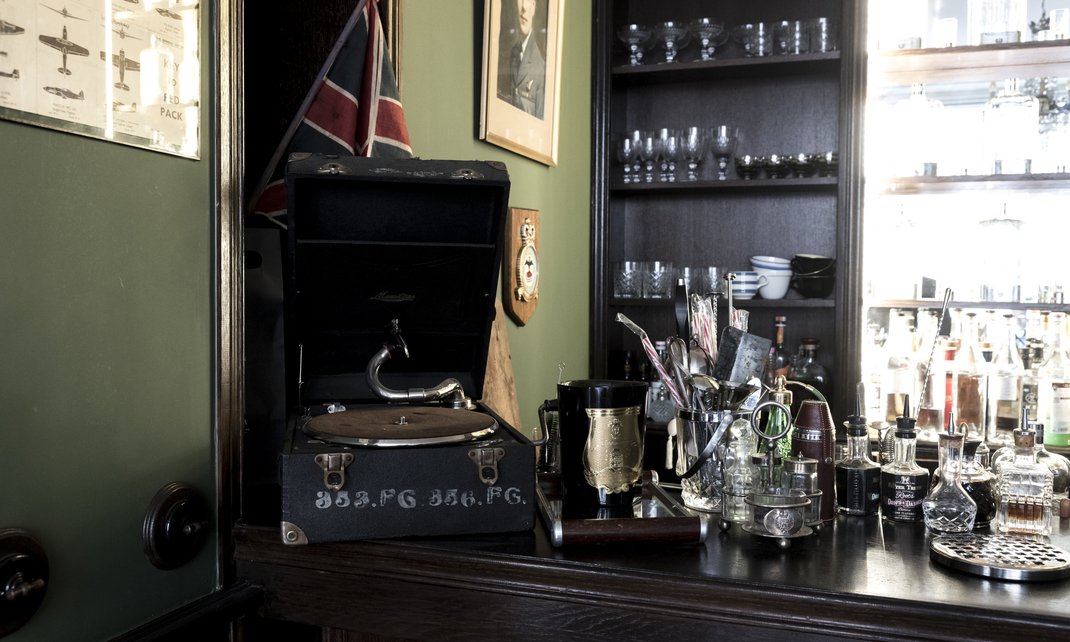 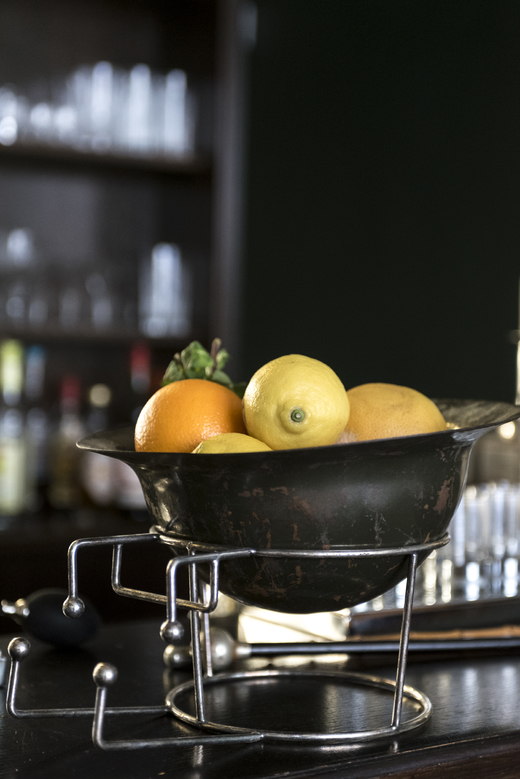 How do you develop your storytelling around this product?

“Optima in Historiae” which can be translated as (“The Best from History“) is the motto of Squadron 303 vodka. History has provided the inspiration to help us create our vodka. In producing it, we made it a point of principle to take into account the constraints that the pilots faced. During that era, grains were requisitioned for the war effort and only potatoes were available. Vodka was distilled in small stills and the time needed was measured: it was only distilled once and remained unfiltered. An unfiltered vodka, distilled in small stills using artisanal techniques from King Edward potatoes: that was the challenge faced by our master distiller in creating Squadron 303 vodka. And it goes without saying, it’s distilled in England, only a few kilometres away from the RAF base at Duxford. These limitations also provide Squadron 303 vodka with its unique flavour with a hint of brioche and its distinctive aroma. It’s goes against the flow in an industry that regularly seeks to produce vodkas that are as neutral as possible.

Respect for the vodka’s historic origins also served as the common thread that guided us in creating each aspect of the brand – from the bottle, inspired by RAF pilots’ flasks, through to the delivery crates which look like munitions crates, and the complete set of promotional material that maintains a connection with objects from the Second World War throughout.

Is there a particular way to drink Squadron 303 Vodka?

Enthusiasts can drink it neat, at room temperature, in the same way that you would drink a whisky. This is how the vast majority of Polish people would drink it – and in Poland, it’s considered to be one of the finest potato vodkas in the world. In France, Europe, or the west in general, it’s fair to say that it will mostly be drunk in cocktails. With its very gentle attack, its powerful kick and its long finish, it allows cocktail barmen to reinterpret a wide range of cocktails that are usually created around gin, rum, or whisky.

Tell us about the premises where we are now. How long have they been open, and what do people do here?

They are a multi-faceted, timeless venue, in the heart of Saint-Germain-des-Près. It’s our office, our showroom, our tasting bar – our own officers’ mess if you like. We are visited by barmen, drinks buyers, customers, neighbours and friends who come to drink our new cocktails after work. 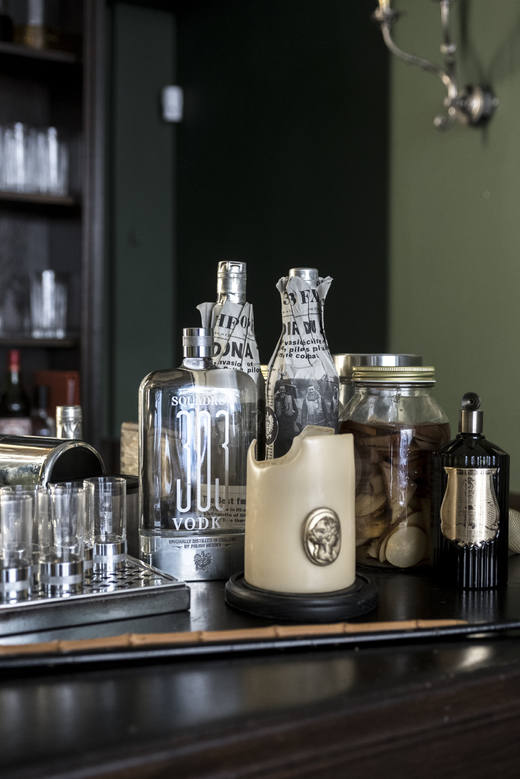 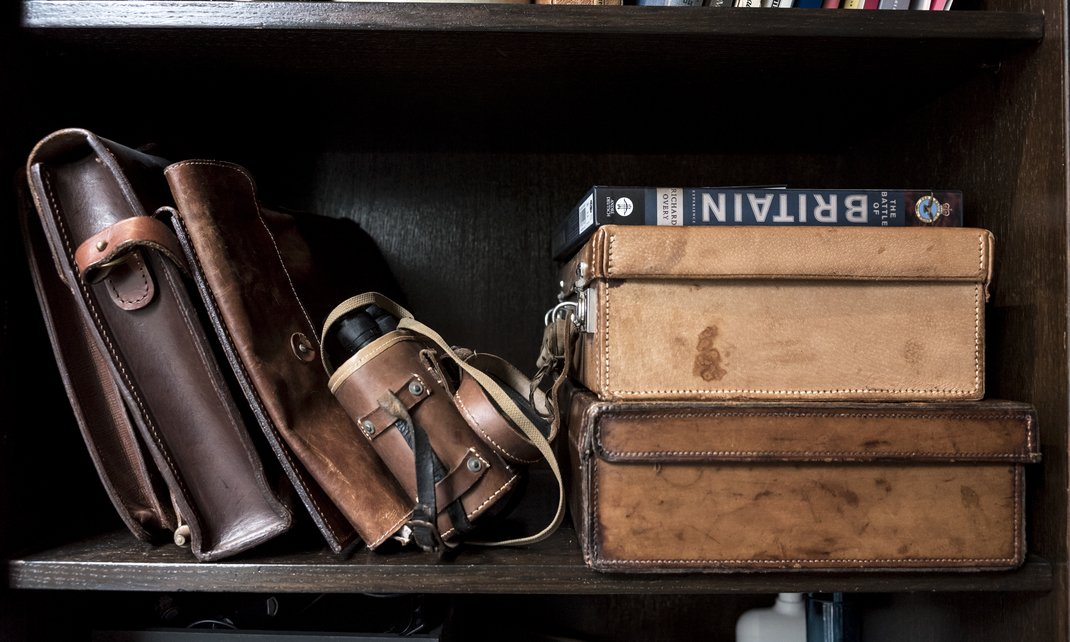 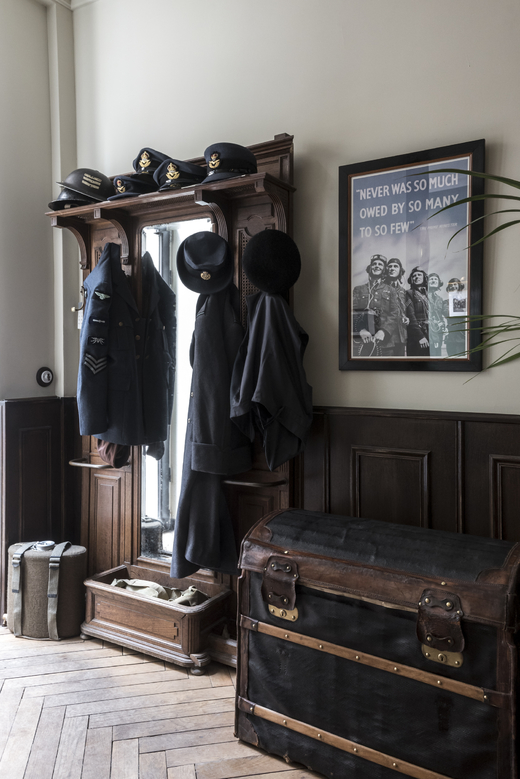 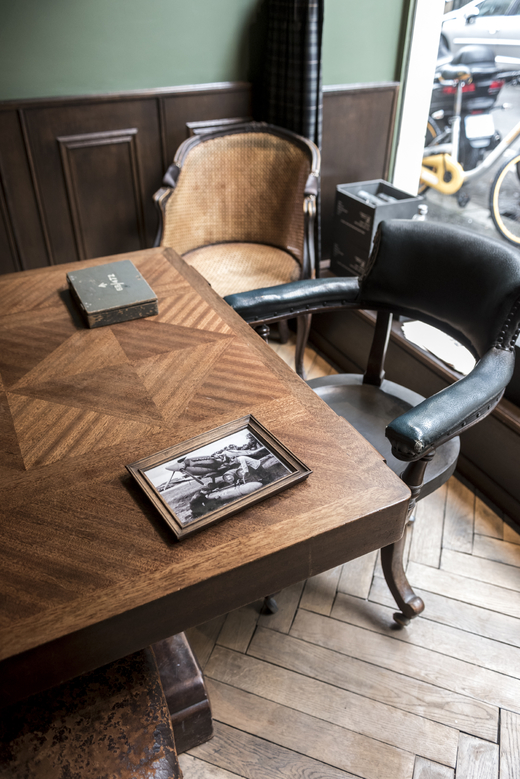 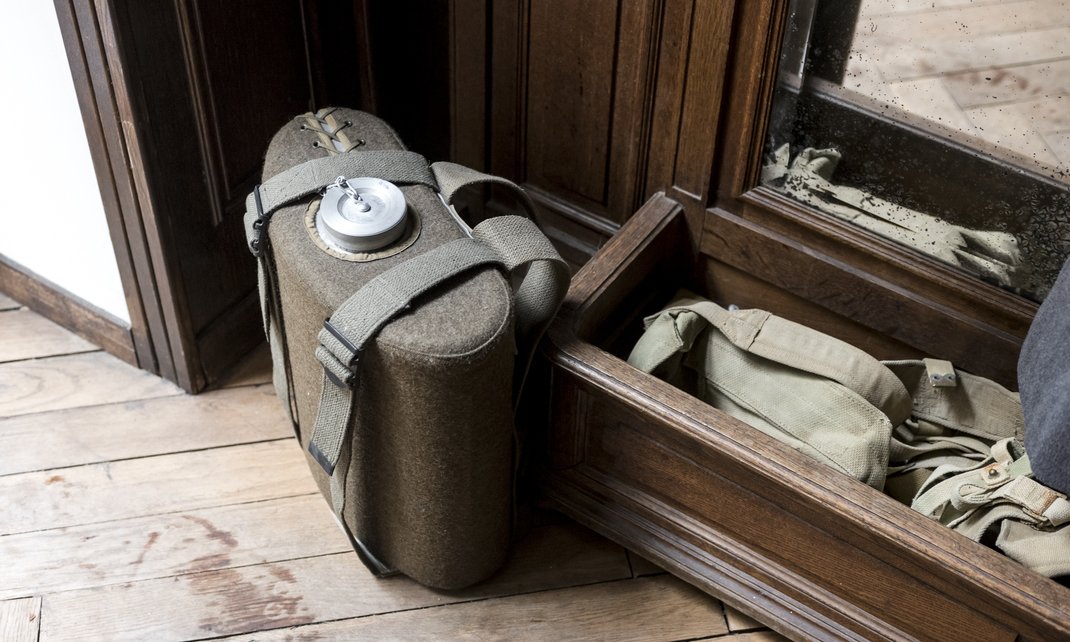 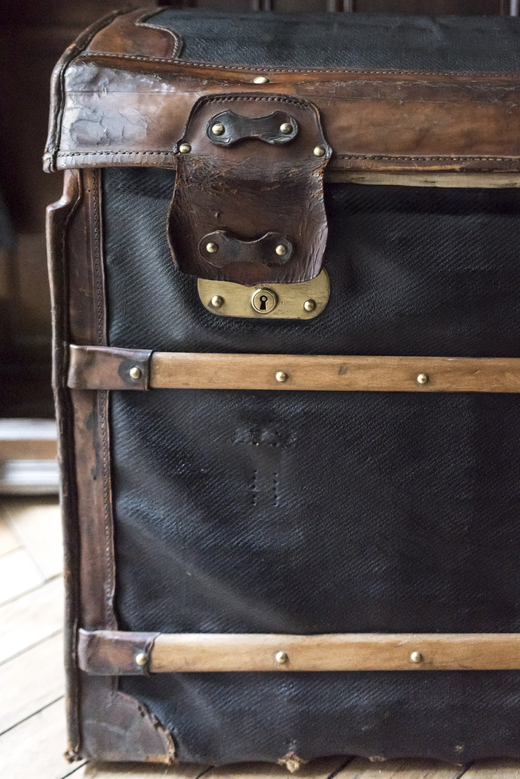 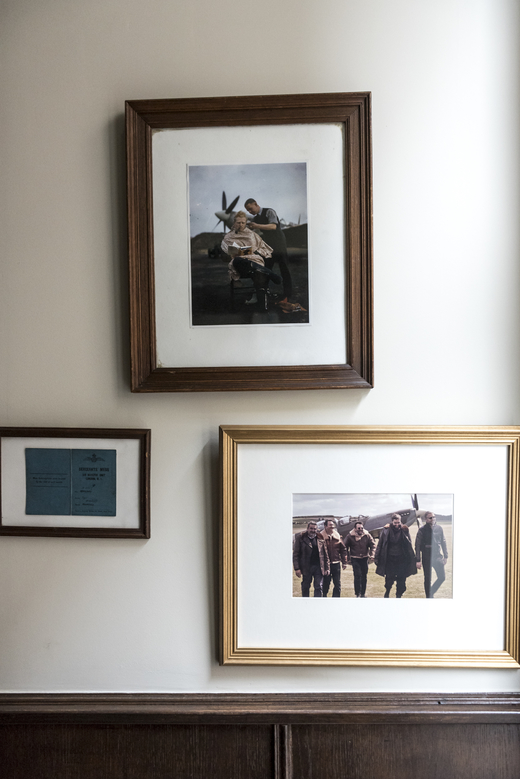 How did you come up with the interior design?

The Squadron 303 vodka officers’ mess had to showcase the brand, a living tasting venue that would house objects from the collection. We wanted to give anyone who came through the door a vivid sensation of travelling back in time. That’s why the premises were designed as a film set, fastidiously designed to look like an actual 1940s RAF officers’ mess. The era was a period when traditional Victorian arts and crafts design overlapped with the more modern Art Deco style. In the 303 mess, a large art deco desk by Gaston Poisson shares the space with captain’s chairs bought from antiques shops in the English countryside and Moynat trunks. What make the venue unique is the ability to surround yourself with period objects. When a tasting is held at the Squadron 303 mess, we listen to music on a gramophone that came from RAF Goxhill and drink coffee from period cups that feature the RAF seal. You also have the moving experience of reading pilots’ logbooks, some of which stop suddenly in the Battle of Britain, or get a taste of English humour by ringing a victory bell cast from the metal of Messerschmitts that were shot down.

Could you give us an exclusive recipe from your cocktail menu?

For something more elaborate, the Polish Heroes cocktail was created by our Cocktail Officer, Gregory Firmin Guion for the brand’s Polish launch, so here’s the recipe: Pour 50 ml of Squadron 303 vodka into a mixing glass, then add 25 ml of Grand Marnier and six drops of Peychaud bitters. Add a bar spoonful of pistachio syrup, then a bar spoonful of Amarena cherry syrup. Add an ice cube and an Amarena cherry on a cocktail stick, and with a smoking gun, smoke the mixture with cherry tobacco. 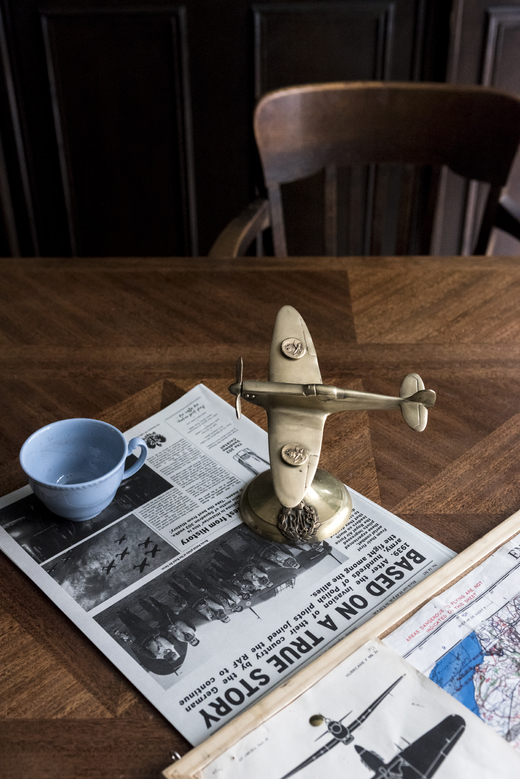 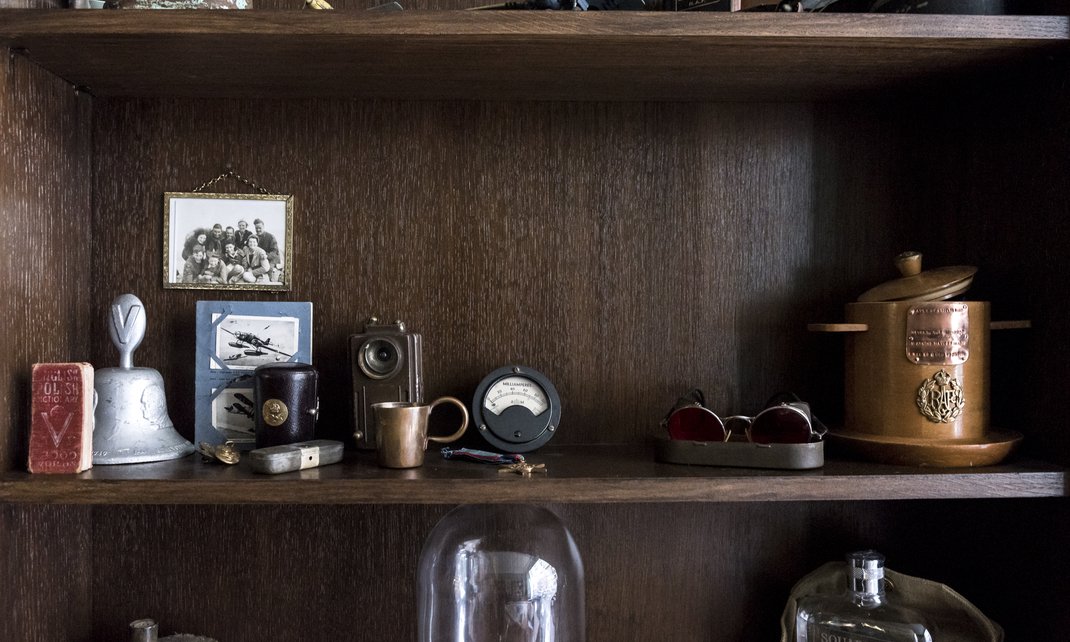 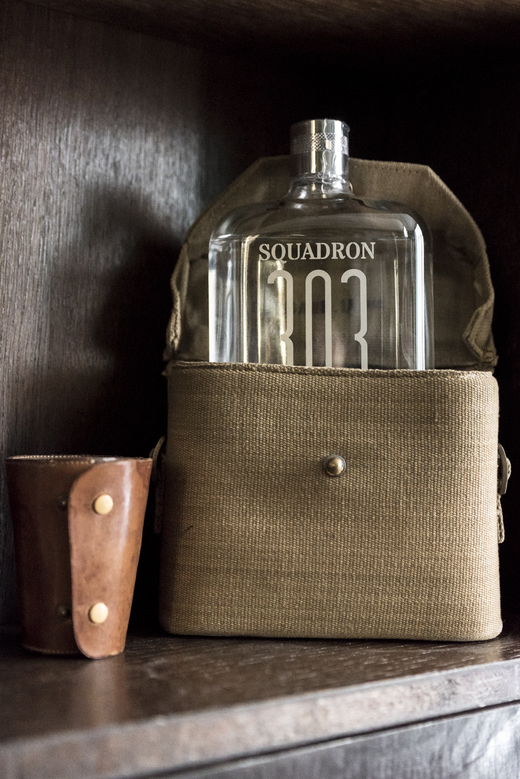 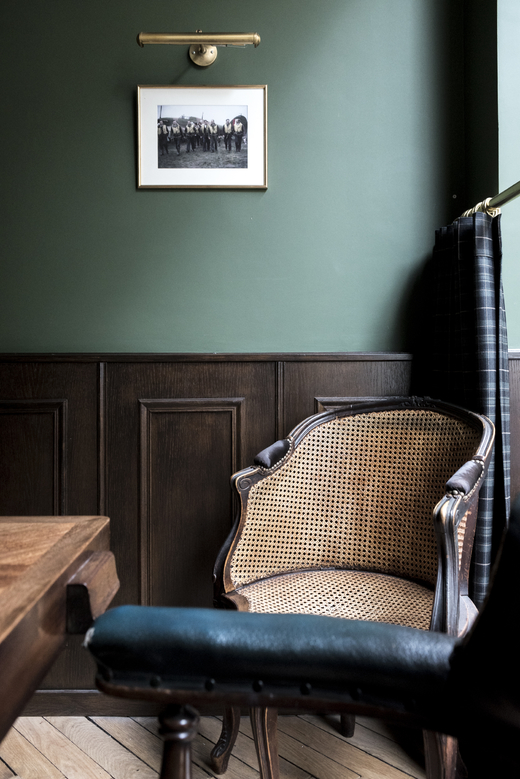 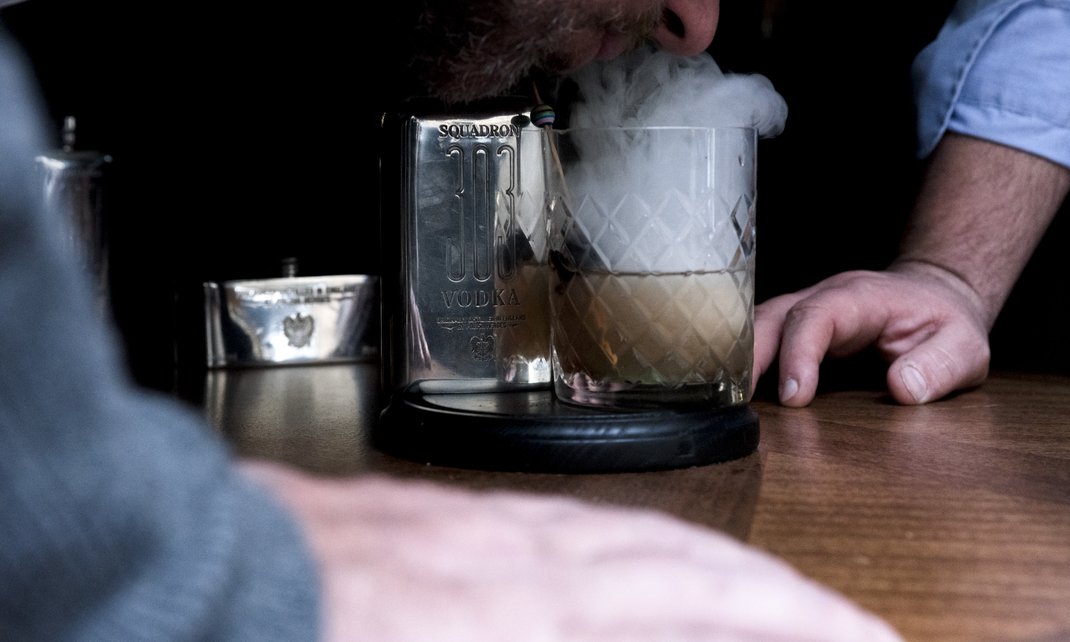 With its very gentle attack, its powerful kick and its long finish, it allows cocktail barmen to reinterpret a wide range of cocktails. 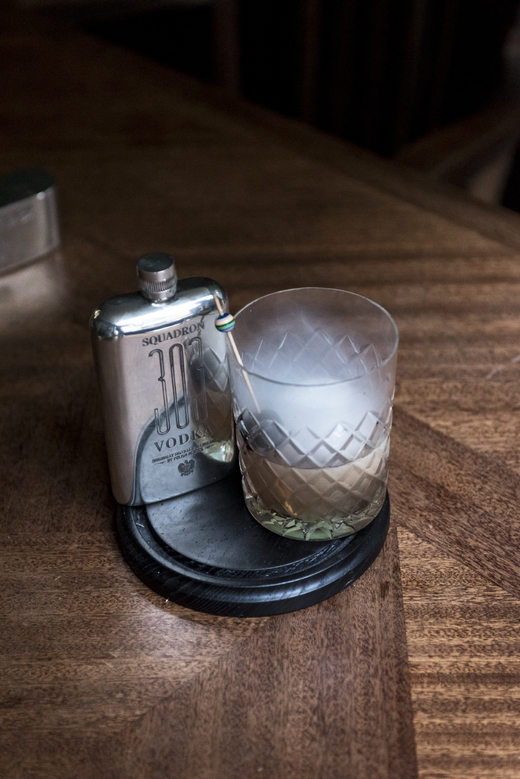 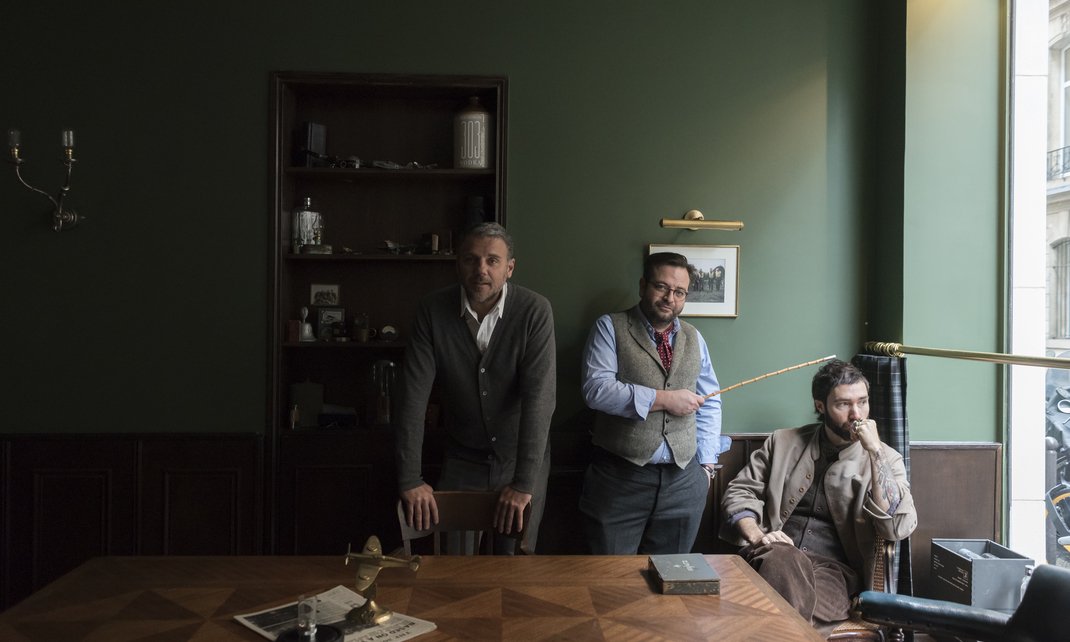 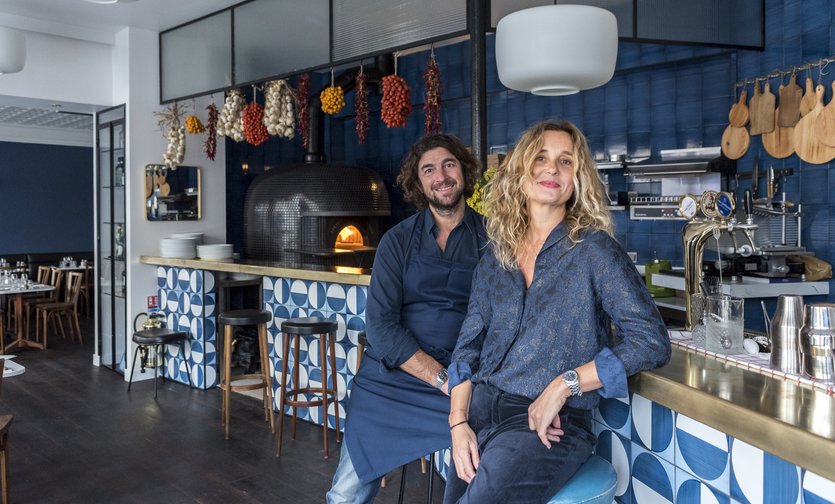 Gemma. A sort of diminutive that resonates, trips and makes our tongues dance with its delicious Italian sounds We could...

It was evident that these three would meet. Pierre Bénard, a former advertising executive, Augustin Deleuze, for several years an even...

A Family Visit to Villa Lena in Tuscany

There are places for which I could change my entire life. Of course they would have to be in Italy, my native land, where I’ve just...