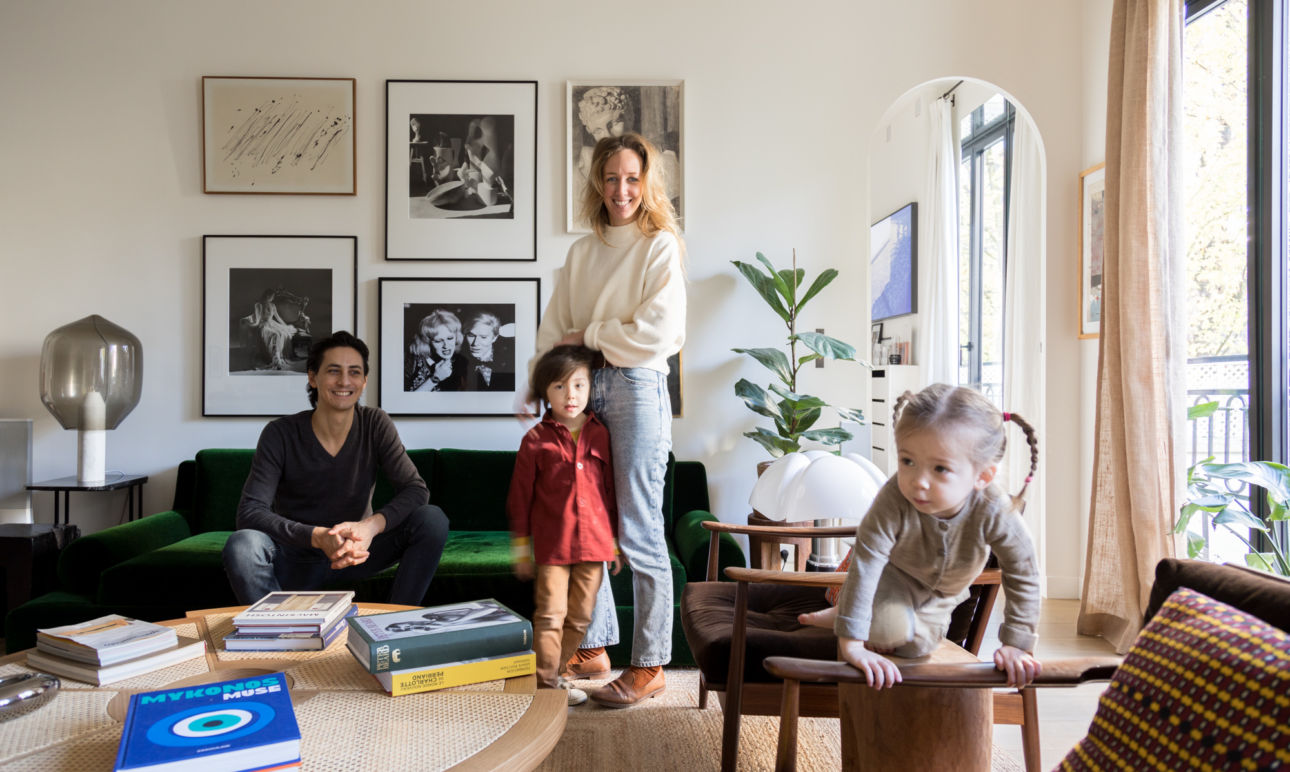 Two apartments in one: a particularly interesting start to the year! A family nest entirely revamped by its owner, Samatha Hauvette, to illustrate Hauvette & Madani’s signature style. As a co-founder of the architecture firm, she wanted to personally get involved in the works so that it would reflect the style and influences adopted by herself and Lucas Madani, with whom she formed the partnership ten years ago. Having first met while hanging out on the benches of the Ecole Camondo, the two friends are constantly on a quest to achieve the “right balance”. A philosophy that the Hauvette & Madani brand embodies, where the end result is natural and obvious – and looks like it always has been. In order to transform her home, this Parisian was keen to overhaul the interior by optimising the available space. The garden-level kitchen was moved up to what the former occupants used as an office. To keep an open-plan feel, the young woman installed a system of three arches, two of which feature rotating mirrors to capture and play with light. A seamless way to link this apartment house’s spaces, which can be seen from different viewpoints. There’s a timeless feel thanks to an understated blend of features that have been carefully selected – in this case marble, wood and zellige – to create volumes that reflect Samantha’s knack for mixing materials. A range of objects and furniture with different styles and from different eras. Striking lines that rub shoulders with family memorabilia, pieces designed with friends and much-loved iconic designs that make this home visually striking but also family-friendly! And as mum to Achille (5 1/2) and May (2 1/2), she also applied her vision to her kids’ rooms. Colourful and joyful, their bedrooms have been as meticulously thought out as the adult rooms. Decoration that’s been applied down to the very last detail, so that “they enjoy it and don’t invade the sitting room (too often)!” (laughs). Because at the end of the day, who said a home should just be designed for adults? 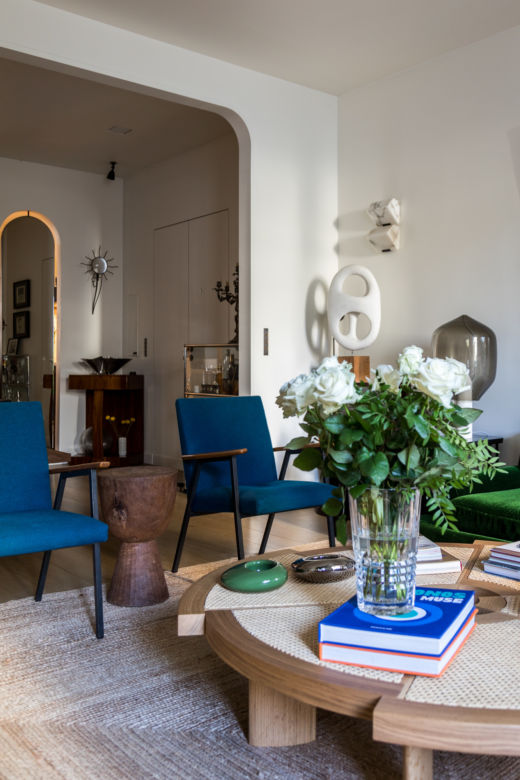 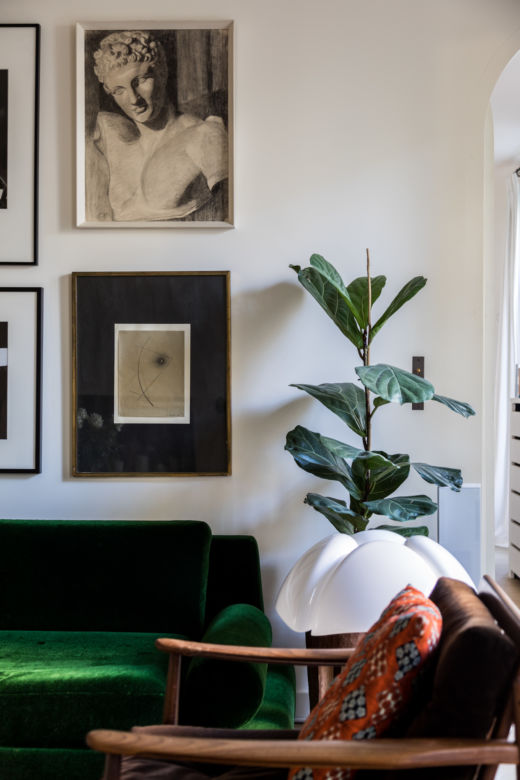 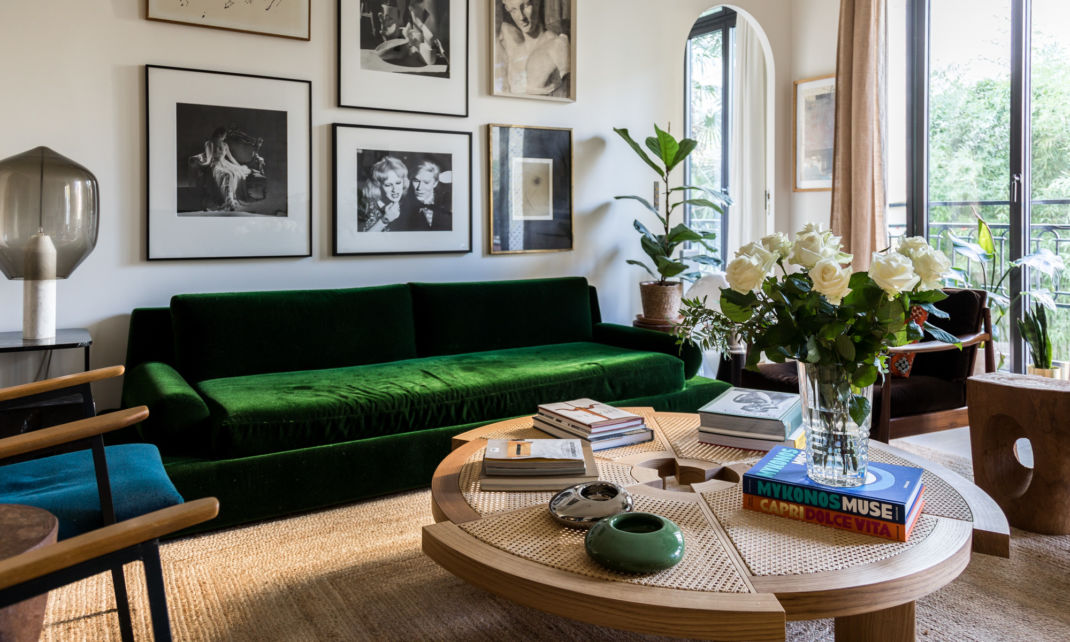 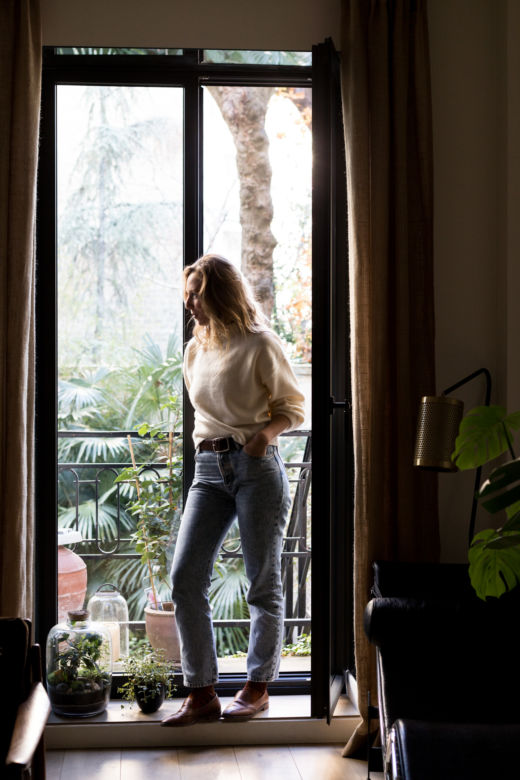 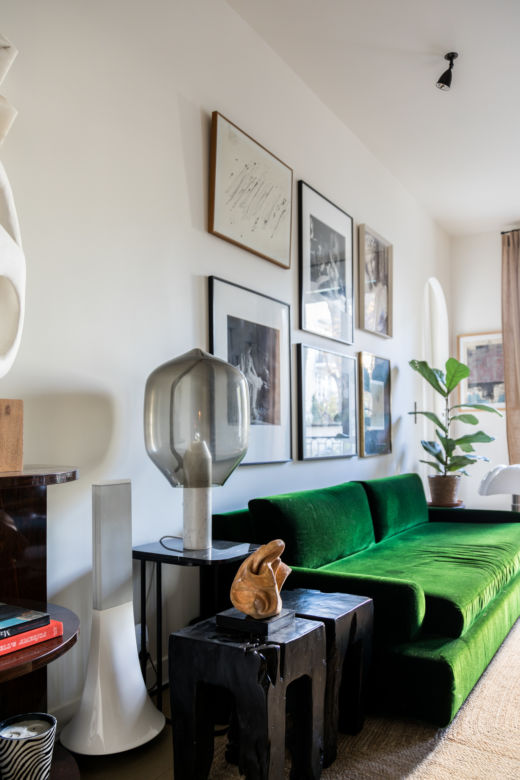 Samantha, Swan: could you introduce yourselves, please?

Swan works in the pharmaceutical industry, and I’m an interior architect and designer. We have two children, Achille (5½ years old) and May (2½ years old), and we have fallen in love with this apartment, the home we have been living in for two years now!

Can you tell us about your background?

I studied at the Camondo school in Paris, which is where I met my friend and business partner Lucas Madani over 10 years ago (already!). We established Hauvette and Mandani straight away, as soon as we had our diplomas in our pockets. It was undoubtedly the insolence of youth, but it was the most brilliant of our ideas!

How did your education in “beauty” come about?

I’d say it was 100% from the family! A great uncle who was a painter, a grandmother who was a sculptor, and my mother, who was always moving the furniture around, transforming the place. This is the legacy that has nourished me and continues to do so to a significant degree today. Above all, it has instilled in me the desire to create timeless places, where the influences of previous generations blend with contemporary inspirations.

Even though there is nothing “creative” about my background, like Sam, I’ve been immersed in “beauty” since I was a child. My mother is a talented decorator and painter, and now I’m very happy to be passing on this taste for beautiful things to our children. 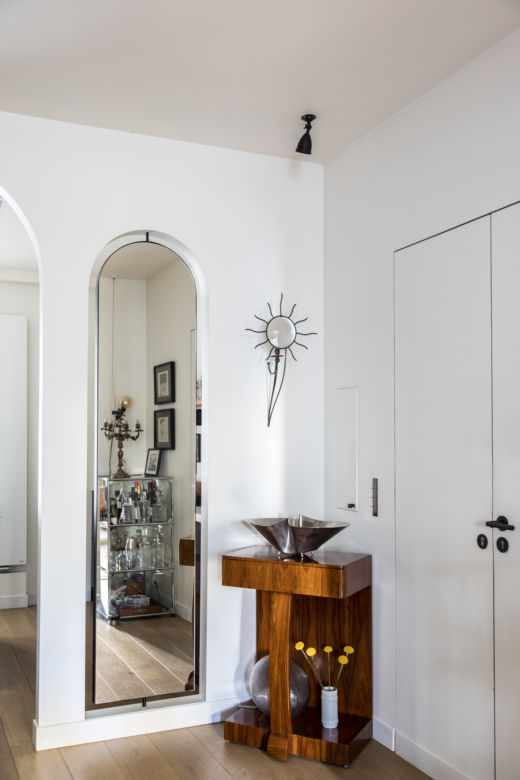 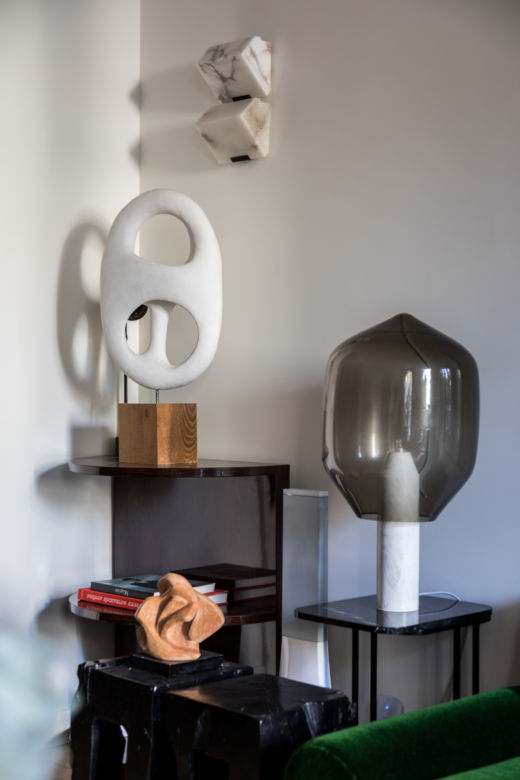 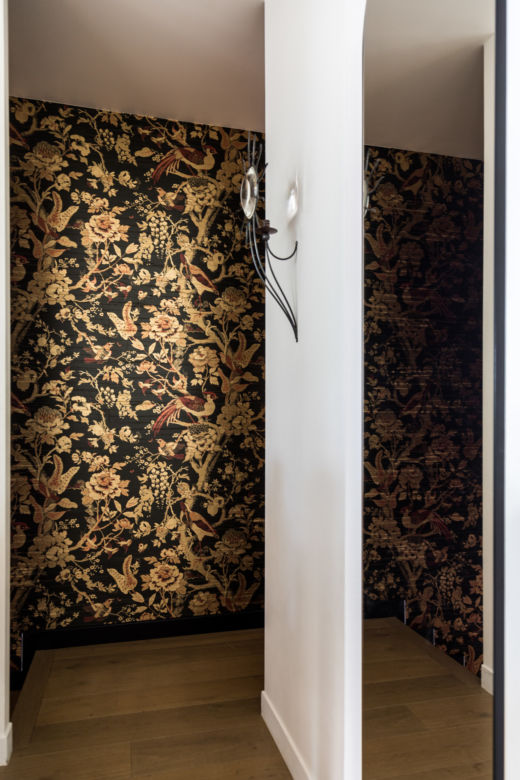 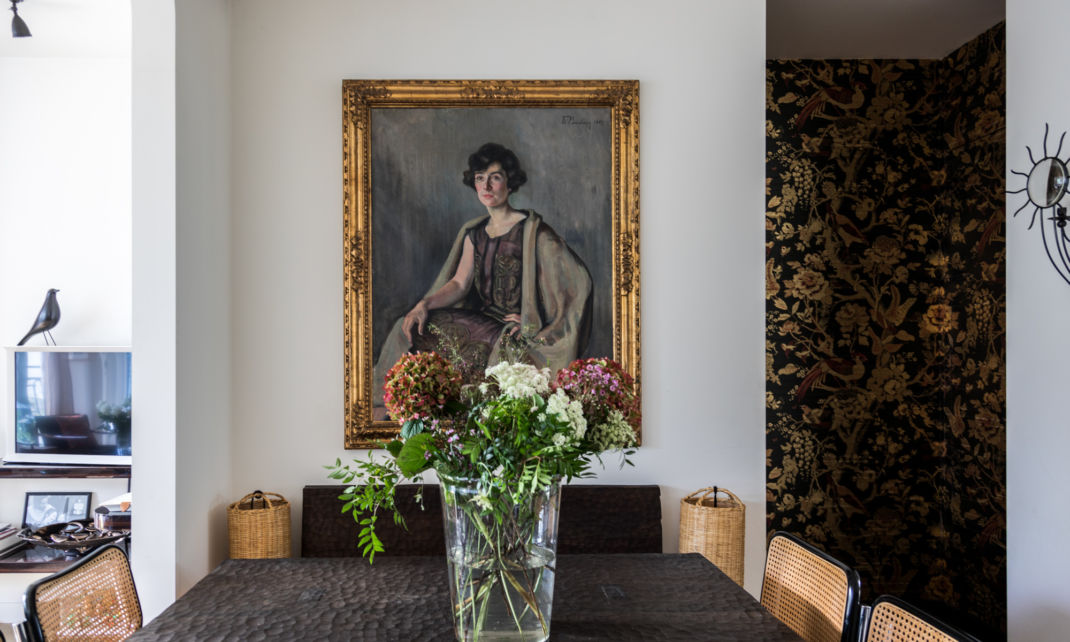 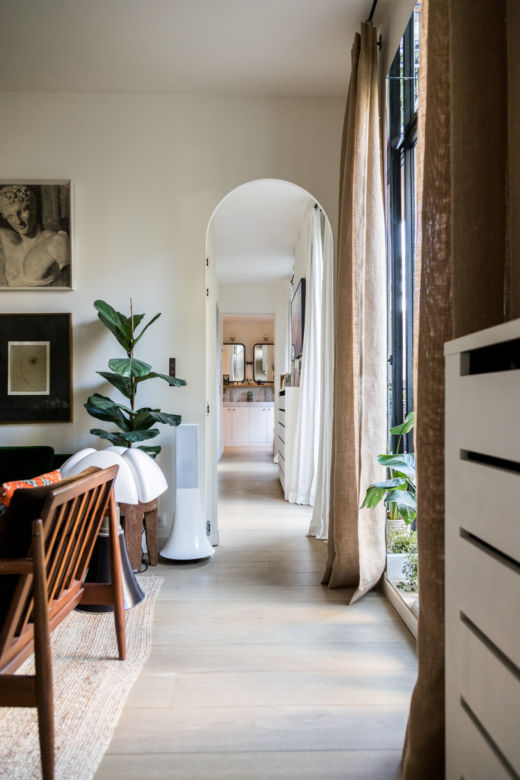 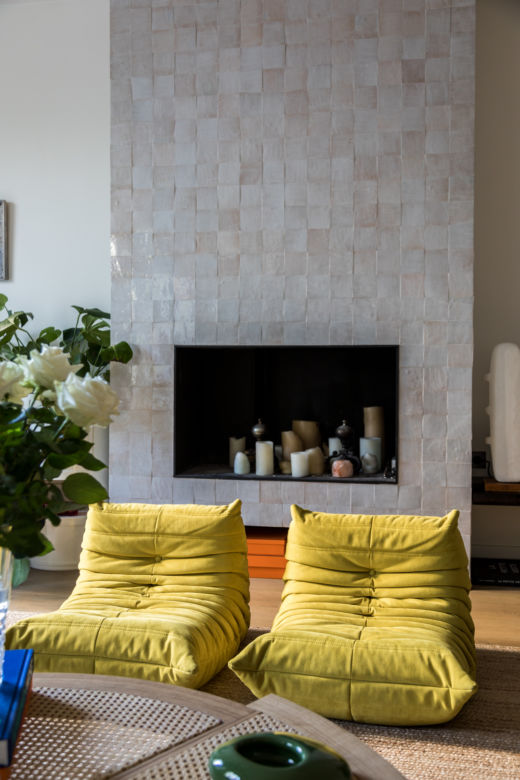 Samantha, you are the co-founder of the Hauvette and Mandani agency. Tell us about it, and your organisation within it with your partner, Lucas Madani.

As I said, Lucas and I met In the lecture theatres at the Camondo. We were very good friends and, somewhat by chance, the question of setting up our agency arose in the summer we graduated. That was over 10 years ago now, and we have no regrets!

This interior is labelled as “The Hauvette & Madani House”. Tell us your thoughts about it.

For a while, Lucas and I were looking to open a showroom, but we couldn’t find THE perfect place. So when Swan and I bought this apartment, it seemed obvious to take advantage of the personal character of the site to show off Hauvette & Madani’s style and influences, and later to receive our customers here.

How is it representative of the style of your partnership?

You can find our own values, a taste of the designers and materials that inspire us, the different eras as well… In fact, we are constantly striving for the right balance, the right combinations, without absolute dependence on the history of a place, and always with the idea of a natural and unequivocal rendering. It’s always been that way. That’s what our partnership is really all about: a highly optimised plan, simple, patinated surroundings and a collection of objects and furniture of different styles and from different eras. Working together is highly beneficial for this approach, one adds, the other takes away, and we achieve real balance.

What are your inspirations as you work?

The same as for all our projects. The advantage is that there are so many that we don’t have to repeat ourselves and we can pick up on new things each time. We are as much moved by the richness of Coromandel lacquers, Barbara Hepworth curves, and Axel Einar Hjorth’s Scandinavian simplicity as we are by Jean Michel Franck’s rigour, Pierre Chapo’s brutalism, Charlotte Perriand’s avant-gardism or the sexy, rock atmosphere of the French and Italian 1970s and 1980s… And so on! 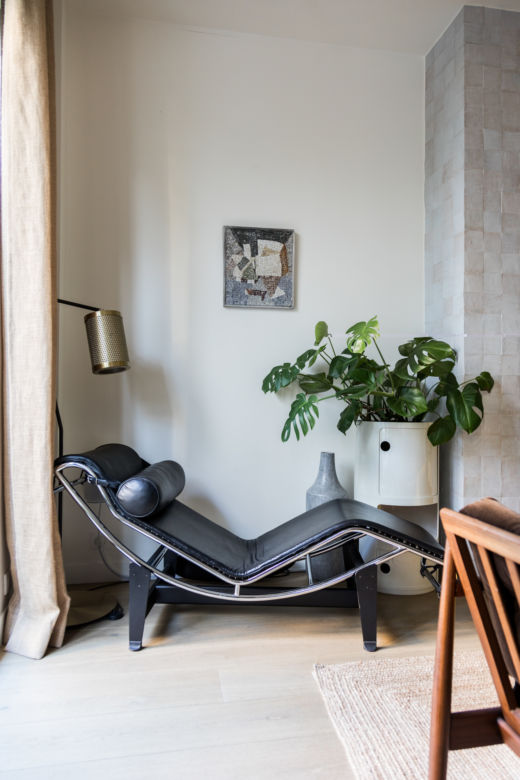 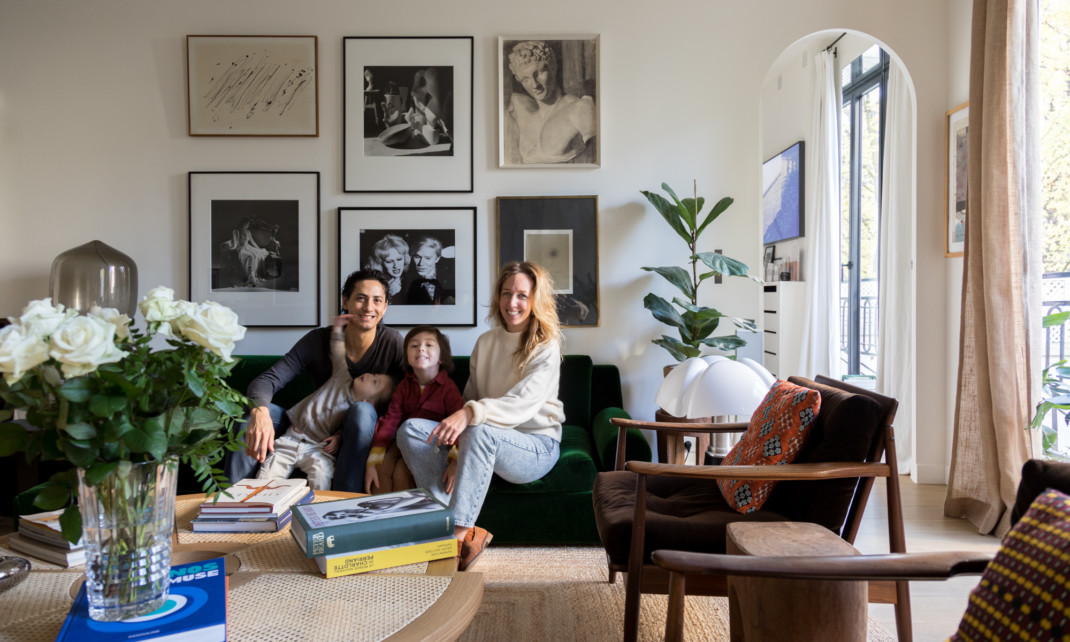 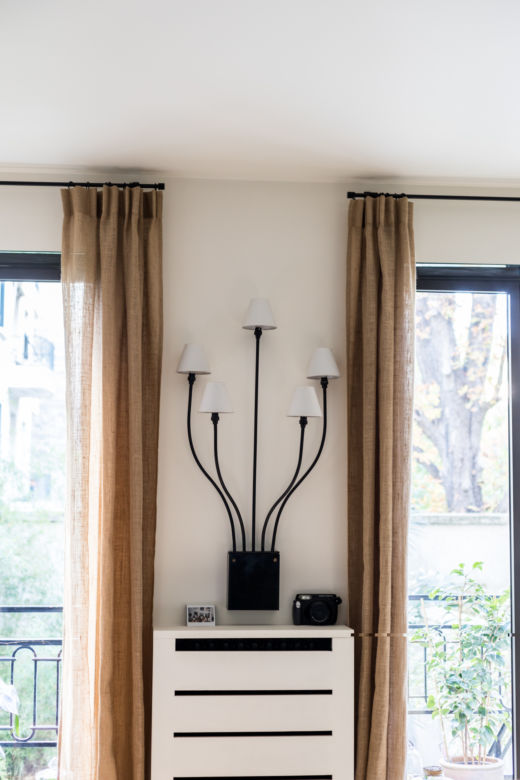 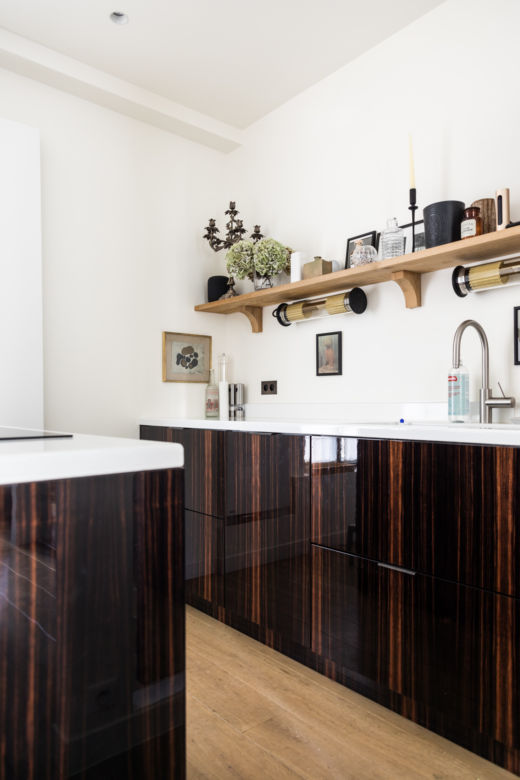 For the kitchen it was a "balancing act": the confrontation between the very precious varnished Macassar ebony, which we have de-dramatised with enamelled lava stone, natural oak and white woodwork (...) 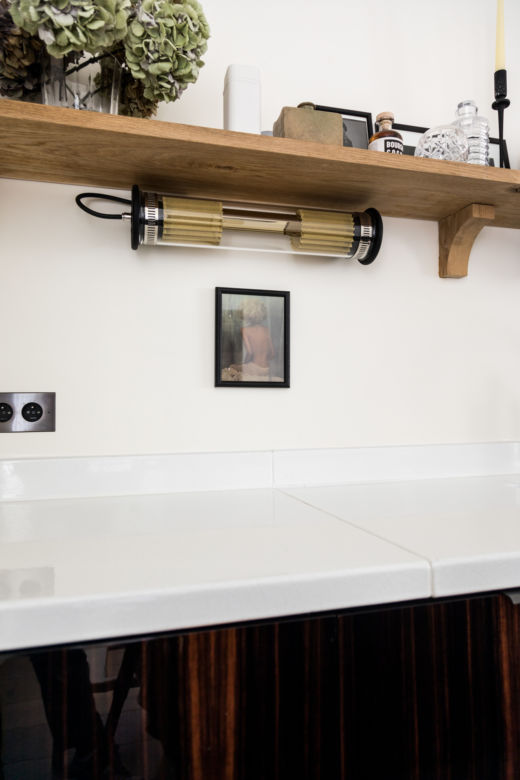 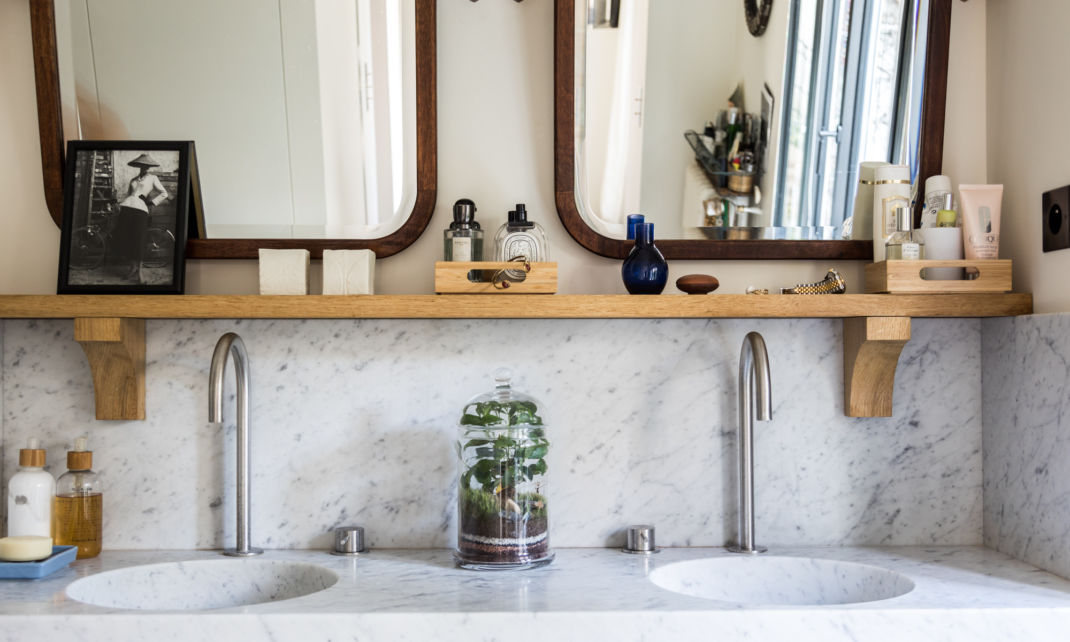 How have you furnished it?

A happy mix, a good mix or a remix! You can see some family pieces, including some paintings by my great-uncle Didier Bereny and my father’s godfather, Jean Dupuis. A Hermès drawing – which I love – bought from Nathalie at the Galerie Française, with whom we have been collaborating regularly ever since. Wrought iron “sun” wall lights and a pair of silver candlesticks from my uncle. And then, of course, there are our favourites: there is always some USM furniture, togos from Ligne Roset, our Achille sofa (Hauvette & Madani), a chaise longue and a coffee table from Charlotte Perriand. Then there’s our Fly Gaby wall light, made in collaboration with our friends Carole and Pierre Emmanuel from the MCDE gallery as well as a dining room set and bedside tables designed with Soha Concept and sculptor Denis Milovanov.

Which room (space) did you have the most fun designing?

The kitchen, I think! One of the parts we particularly enjoy in our job is solving the puzzle that is usually the very first part of a project plan. Here, the kitchen was originally on the garden level. We’ve installed it in the former owner’s office. Not being fans of totally open kitchens, we had to devise a way to keep it at a distance, without closing it off completely. So we designed three arches, two of which are filled with pivoting mirrors, allowing you to play with the reflections of the light. Then comes the “balancing act”: here it is the confrontation between the very precious varnished Macassar ebony, which we have de-dramatised with enamelled lava stone, natural oak and white woodwork. Finally, behind a cupboard door, a scullery that allows you to hide everything away… the dream (laughs)!

You often bring together the great names in design with more contemporary designers. Who are the ones you have incorporated most frequently?

I’ve already mentioned quite a few of them (laughs)! But I can’t ignore Carlo Scarpa, Ricardo Bofill, Angelo Mangiarotti, Josef Hoffmann, Jacques Emile Ruhlmann and Olivier Mourgue. I also have a great passion for Brazilian furniture from the 1950-1960 period by Jorge Zalszupin, Joaquim Tenreiro and Martin Eisler. I would blend all this with pieces from the latest Haos collection, two-three lighting fixtures from the lighting duo, Garnier & Linker, or Marine Breynaert, and the poetic furniture by Pierre Yovanovitch whose work I love. 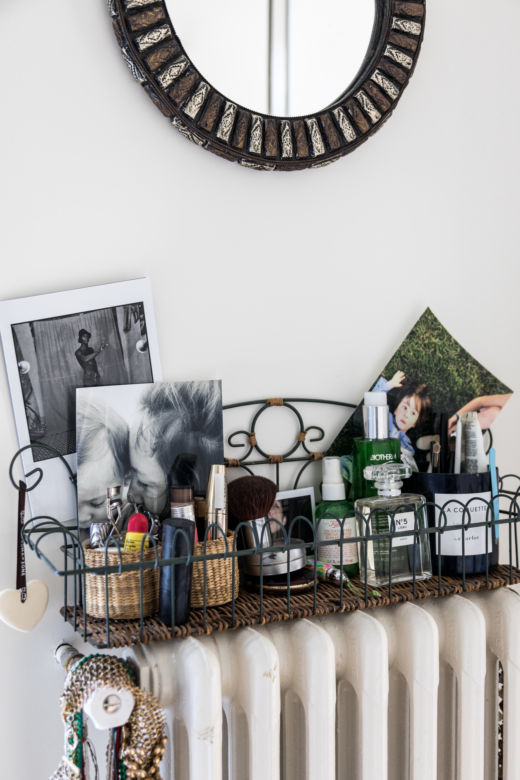 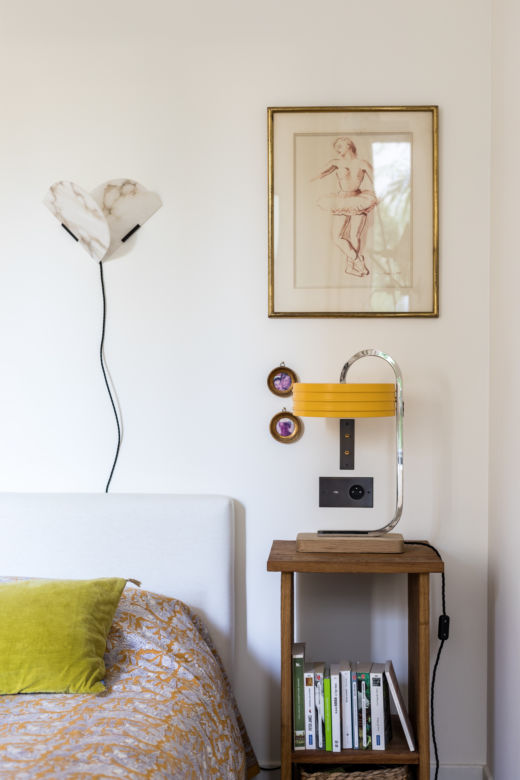 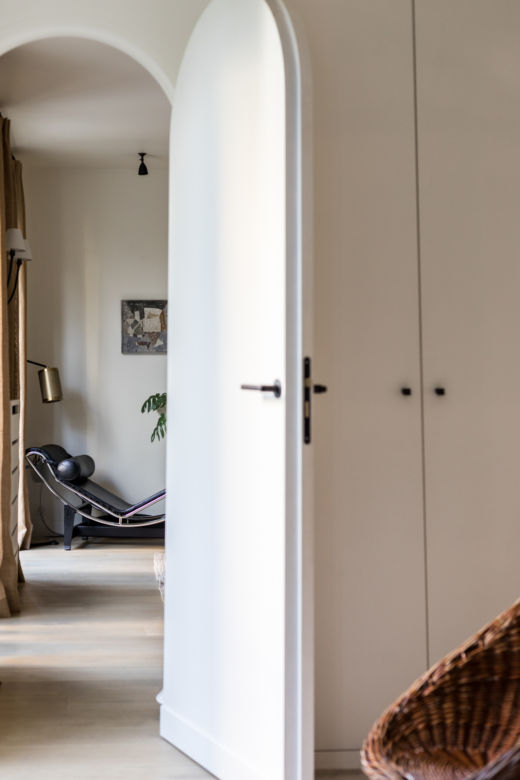 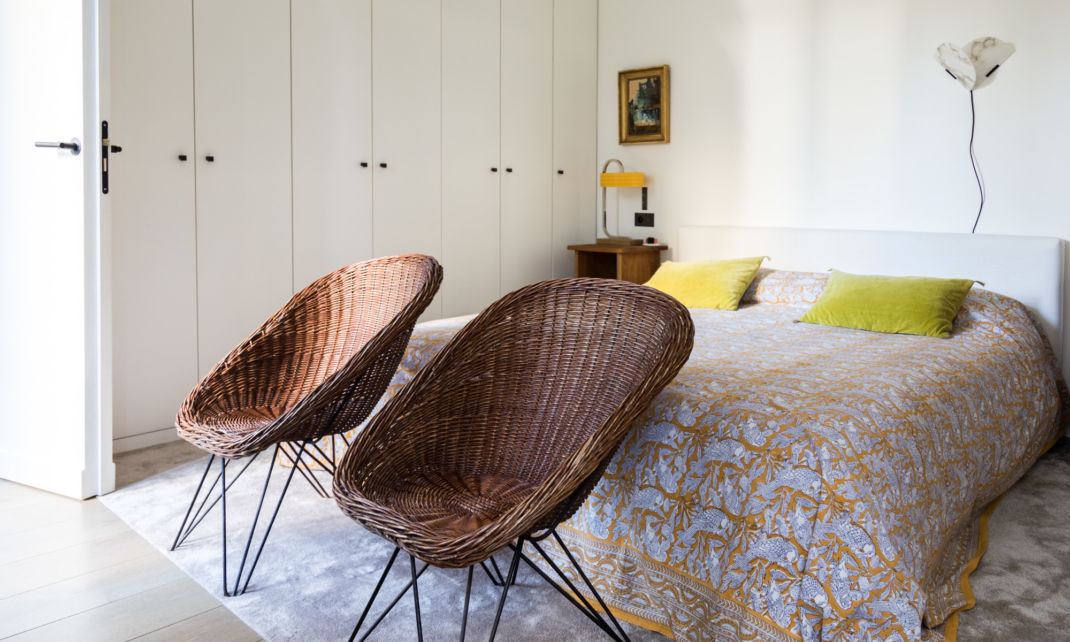 You have just completed the renovation of the new hotel Le Wallace. How did you approach this new challenge? Has it opened up new horizons for you? Changed the way you work?

New horizons, of course, and enjoyable ones at that! We’ve been working mainly on private projects for 10 years. These are projects with multiple and complex issues, and we loved transposing these private housing concepts to the scale of a hotel like Le Wallace. Le Wallace will always be a very special project for us. As well as being our very first hotel, it also marks the birth of the Orso hotel brand, launched by the couple in the city and on stage, Louis and Anouk Solanet… a beautiful adventure involving family and friendship!

What does The Socialite Family mean to you?

A mine of inspiration that is always of high quality, accessible and timeless design pieces … and which perfectly answers a question we are often asked: is it possible to have a beautiful home when you have young children (laughs)?

In a restaurant, I hope! Alternatively, we are blessed with a loyal clientele and some great projects in progress in Paris and elsewhere… We’ll show you soon! 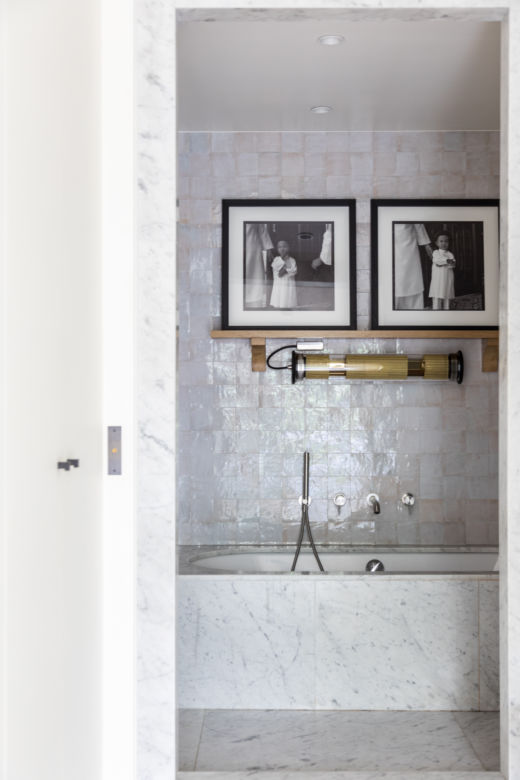 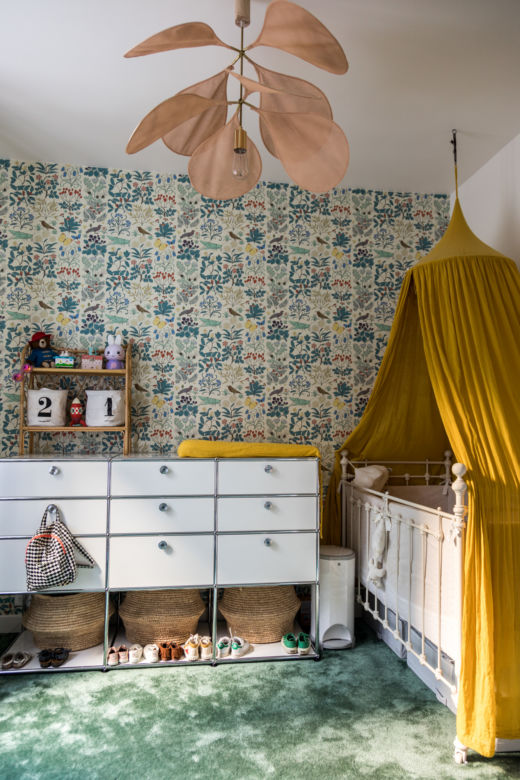 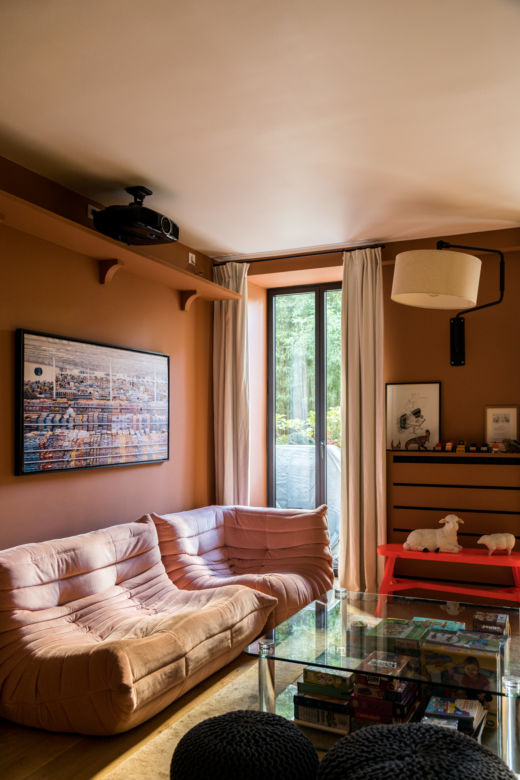 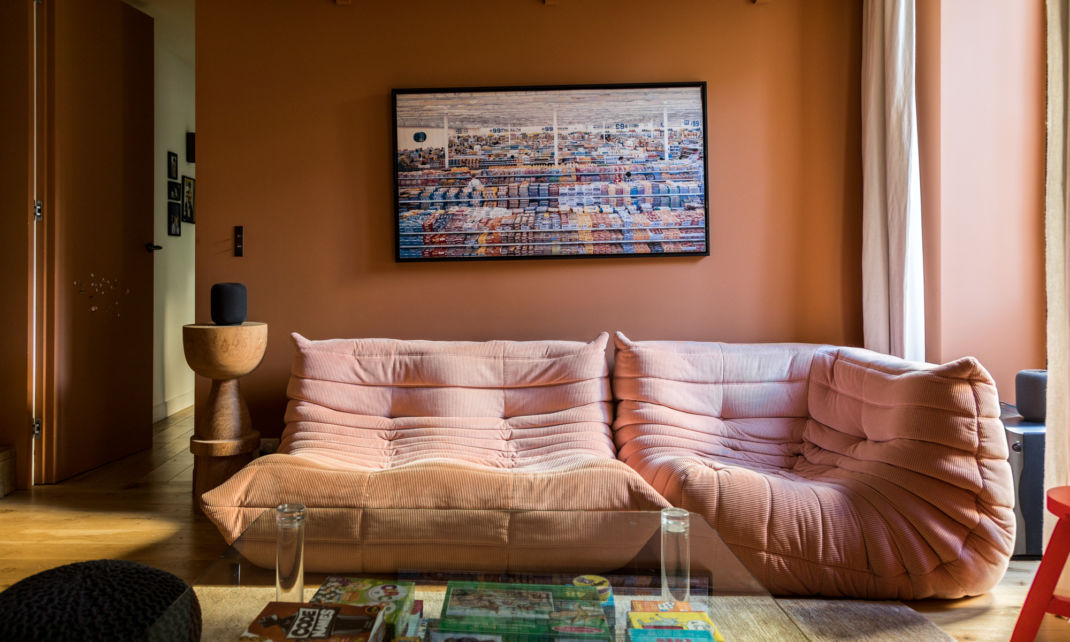 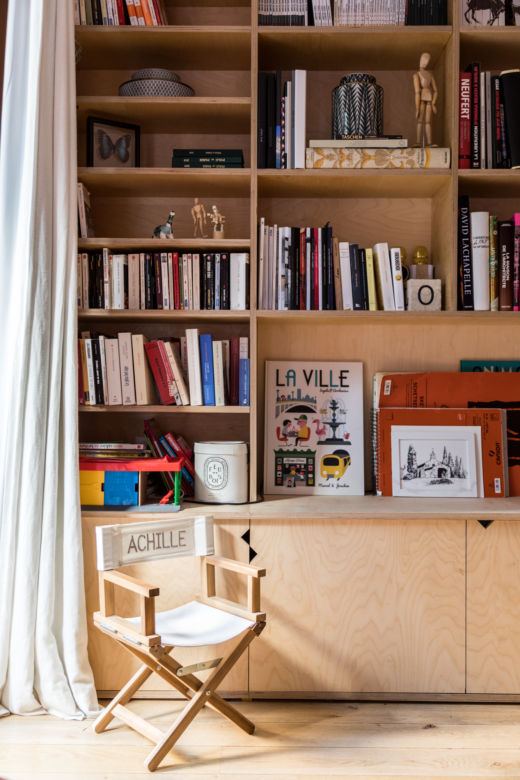 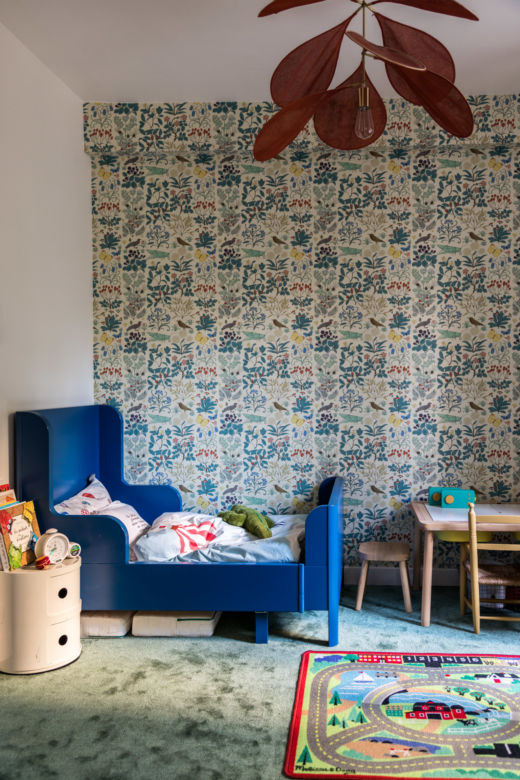 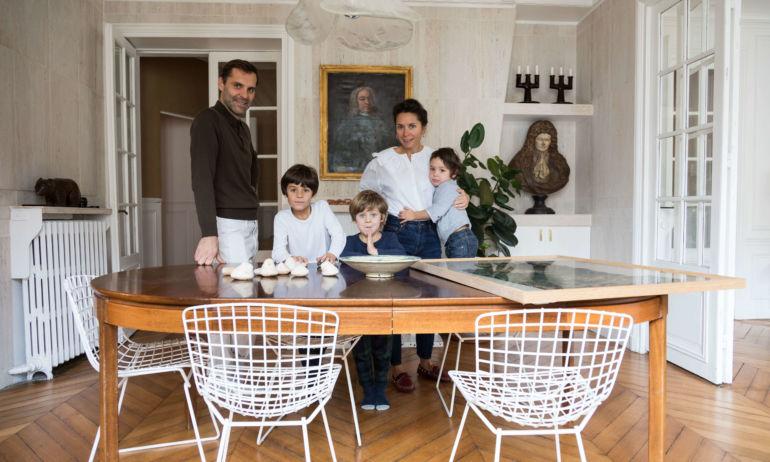 Emane de Malleray and Vincent Viard share their unconditional love of words and beautiful objects with the Socialite Family! Unique individuals, the couple gave us the immense pleasure of welcoming us to their fourth creation… in five...
Previous article
Next article

Silky materials and elegance, Kann revisits the curves of the 50’s with a Scandinavian restraint. Both a creative studio and a...

Thierry and Marie-Sophie are crazy about decoration. Once their workday ends, they indulge their insatiable appetite, reading decoration...

How to rethink the design rules of a classic apartment.
Family - Paris 21/12/15

Christmas comes in colours in Alexandra Diez de Rivera’s home! With her Anglo-Spanish accent, Alexandra seems to have stepped right out...

The Parisian Christmas of an Offbeat Gypset