0
Our eshop is open, deliveries are ensured and more than ever our customer service is at your disposal. Take care of yourself.
My account My cart 0
Famille - Paris

A Family Apartment, with a Classic Contemporary Style, Totally Renovated.

Vanessa Faivre first came to colour through watercolour. Then through the warm decor of Australian interiors that she discovered during her time working at Tempo Interiors in Sydney. In this prestigious agency, where she made her debut in 2001, fabric is king. It later became her obsession. After four exciting years of training on increasingly spectacular building sites, this Frenchwoman returned to Paris. Back, and stronger than ever, she took launching her agency A&D Vanessa Faivre in her stride! And one thing led to another. The first clients, the projects, the children… In 2011, the Parisienne gave birth to twins and threw herself, together with Marc, her husband, into the total renovation of an apartment that they had only just found. A property (too) long untouched, where everything, absolutely everything, had to be redone. Colour, the “backbone” of her work, was, consequently, her principal ally. Wallpaper motifs, tinted flat tints, Moroccan carpets on the floor, books prominently displayed and, on the walls, some of the famous paintings with which everything began. Yes, colour is everywhere. But at the same time discreet. As brought to light by the total redistribution of the rooms in this 145 m2. A through space where the characteristics of the old have been preserved as if to better underline the professional’s contemporary additions. The natural wood skylight in the open kitchen – the nerve centre of the house – but also the custom-made fittings used to free up the living space. A signature project with a personal decor that appealed to The Socialite Family who, last autumn, immortalised some of their latest achievements! 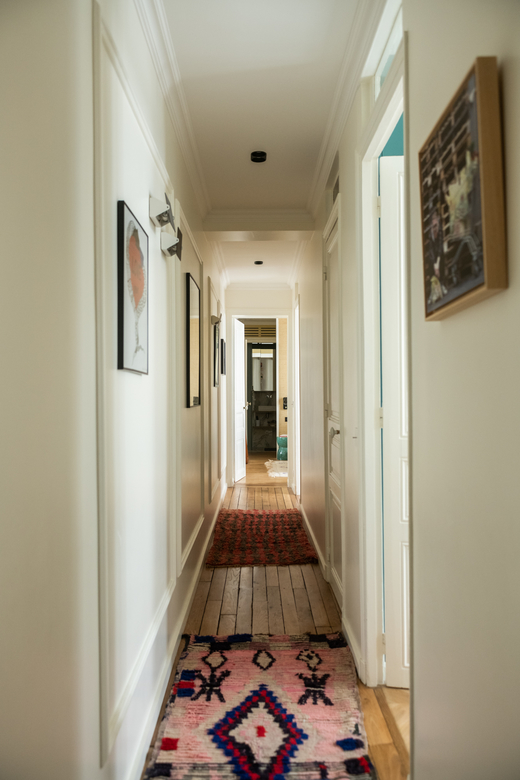 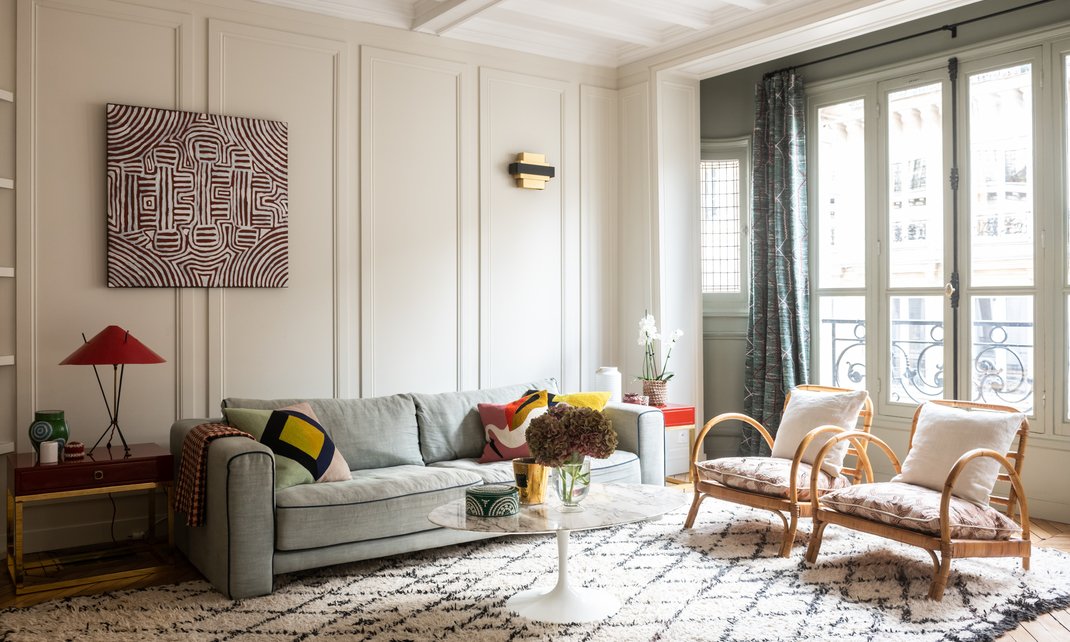 Vanessa, can you introduce yourself, please?

I have been an interior decorator in Paris for 10 years, but my career has not been very linear. That’ss probably linked, in fact, to who I am! I work lots, I’m always running about, and I have an extremely full family life, with three children (who run about a lot too!). I’ve been married to Marc for three years, and I also rely a lot on a group of friends who are very precious to me and who are around me a lot. After studying business in Paris, I worked in London for five years as a marketing manager. At the same time, I organised mini-exhibitions to sell my watercolours and assist photographers. I needed an artistic activity! I was searching for my vocation. Finally, in 2001, in Australia, I took the plunge and seized an opportunity to work alongside a decorator. Two years later, I was recruited by the well-known agency Tempo Interiors in Sydney. That was a revelation. I was able to decorate some magnificent villas in the city’s bay area. I gained in confidence: being French abroad helps a lot! After many years spent in places other than France, I returned to Paris with a desire to establish my own business. Although I had been looking for a long time for what I wanted to do, I always knew that I wanted to have my own business. So, in 2009, A&D Vanessa Faivre was born. Nowadays, I mainly work on renovation and decoration projects for individuals in Paris.

When did you move into this apartment?

I’ve been living in the 9th arrondissement since Arthur, my first son was born in 2007. When I separated from his father in 2009, everything changed. I bought an apartment and set up my company at the same time. Luckily, the construction sites followed one another very quickly! Since then, we’ve moved around the neighbourhood quite a bit. When Marc and I found out in 2011 that I was pregnant with twins, we had to act quickly. Our previous apartment had become too small, so we didn’t hesitate when I discovered this property which hadn’t been touched for 50 years!  It had a very attractive double living room, but the rest was very dark, with a narrow corridor 12 m long. However, it had enough windows to allow us to create four bedrooms, which was our priority. So, we went straight ahead and bought it. 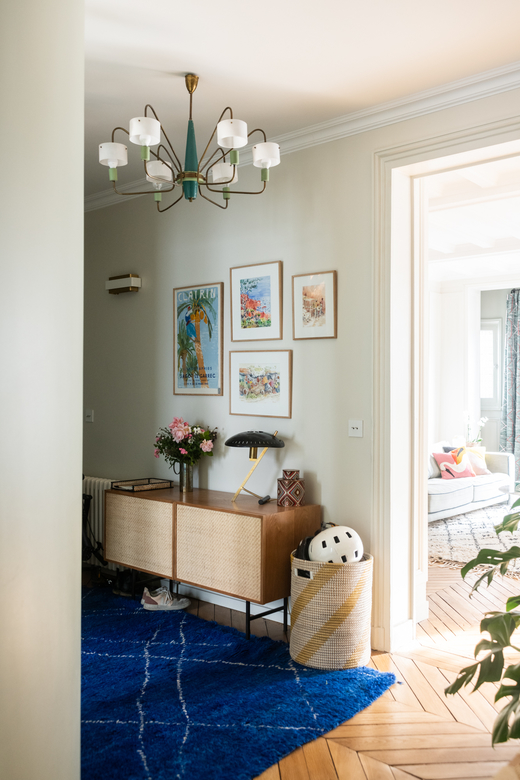 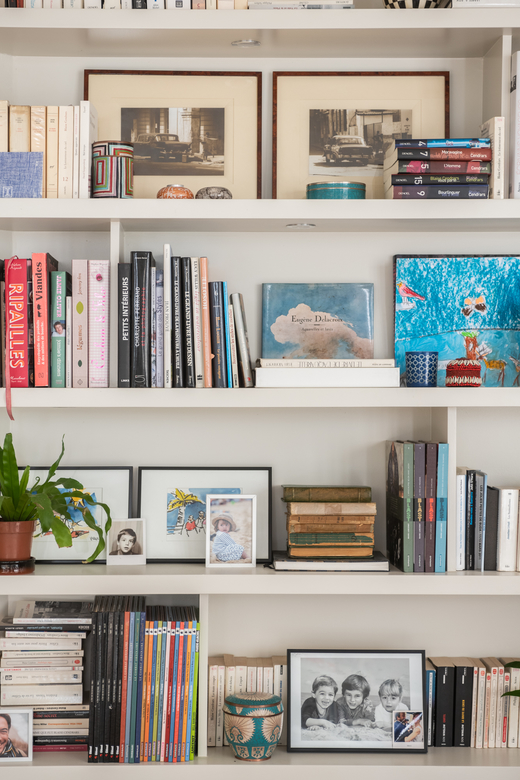 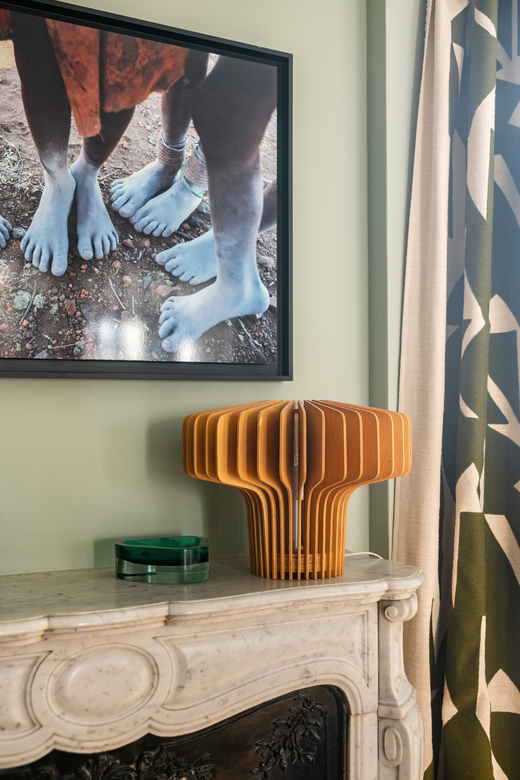 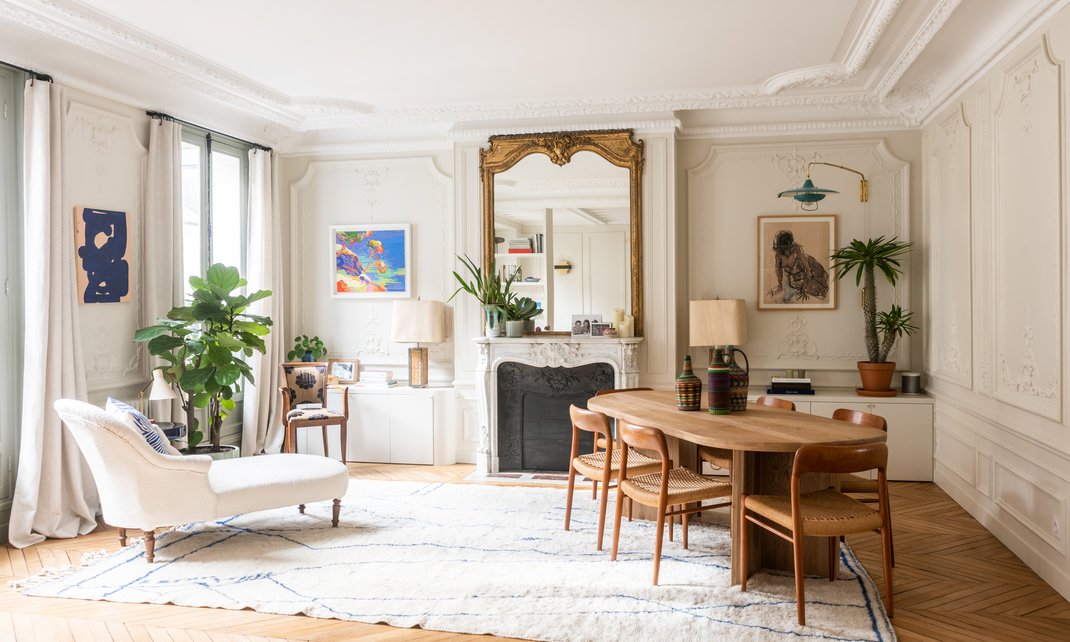 As a specialist in interior design and decoration, what changes/improvements to the space did you make first?

With three children, opening up the spaces to create good circulation between rooms seemed essential to me. By redistributing them, we gained in light throughout too! The entrance hall, which was very spacious, was resized to house the kitchen, which is now in the centre of the apartment. The 12-metre long corridor is now only 8 metres long. In spite of these transformations, Marc and I wanted to retain the charm and characteristics of the old property. I’m happy to have managed to preserve the cornices and all the fireplaces!

What style did you want to give to your interior?

A blend of classic and contemporary. For the living rooms, I wanted softness. In the living room, I fell in love with the alcove window, surrounded by stained glass, straight away. I chose a muted colour – Farrow & Ball‘s Pigeon Green – to create the focal point of this room. Whenever we can, Marc and I love to go to the flea market in Saint-Ouen. Recently, we’ve been picking up rattan armchairs there. Our lamps too, which, if they don’t come from there, must have been bought from antique dealers like Nicolas Debauge or Antiquités Frédéric Sportis, who have C19-century items. We found the Niels Otto Møller’s chairs on Pamono. As for the dining room table, I designed it and had it made by the craftsman who created all the made-to-measure carpentry in the apartment.

You practised first in England and then in Australia. What impact has this had on the way you work? Your tastes?

In Australia, my bosses gave me a taste for colourful, warm interiors where fabric (one of my passions today) is king. I learned to see the beauty in every style while I was managing their showrooms, renewed continuously by numerous textile collections. For example, they adored Nina Campbell, Designers Guild, William Yeoward and Jim Thompson, Kravet and so on. I still have a taste for eclectic interiors, I think! These days, I am a fan of Maison Pierre Frey. 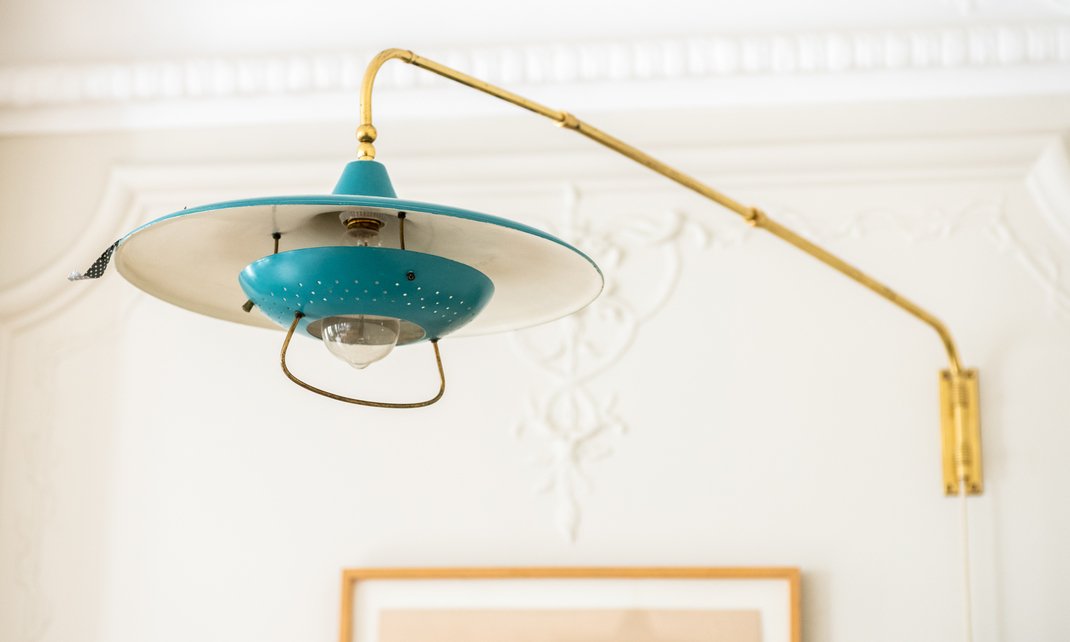 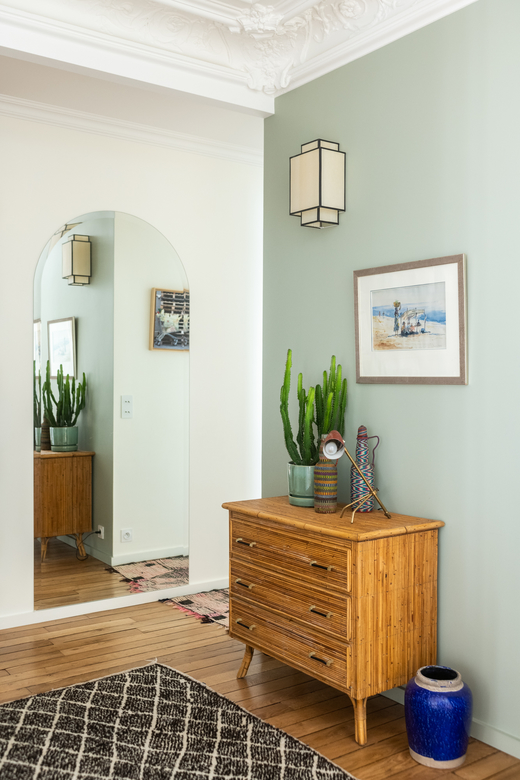 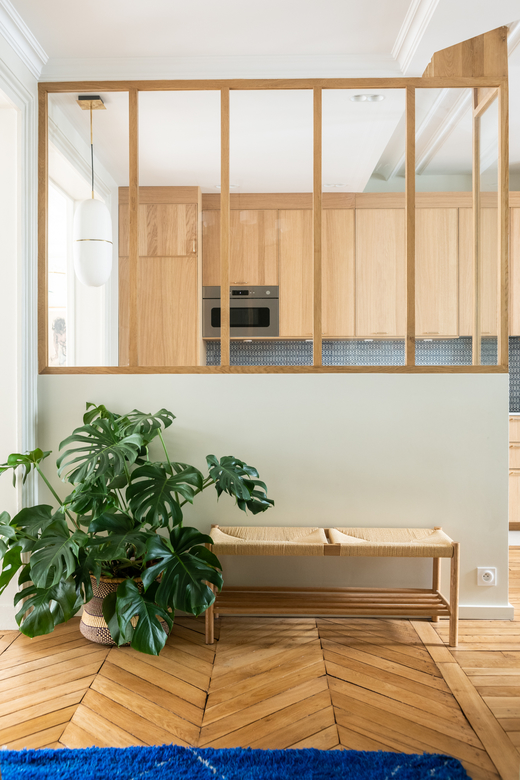 What is your material, your colour, your favourite decorative style at the moment?

I’ve always loved green! I use it in all its shades, even though, lately, I’ve been won over by the terracotta trend. My current craze is for everything that is curved. Curved walls allow me to make circulation in apartments more fluid, and even improve the light. Even the painted cupboards and shelves are rounded!

What’s your trademark as an interior decorator?

The combination of classic and contemporary. I often use muted colours to create a warm atmosphere. My choice of materials is quite masculine. I pay a great deal of attention to the light and circulation in and between the rooms, but I believe my hallmark is to create made-to-measure layouts by using the full height of the walls to free up as much living space as possible. I like the idea that the shelves I create reveal the character of my clients: Comics, photos, books, favourite objects or even plants say a lot…

As a professional, what does The Socialite Family mean to you?

The Socialite Family has a keen eye for trends! Creating pieces of furniture that particularly reflect the expectations of a large proportion of my clients. I especially like the Panchina bench and the lighting collections, from the Gioia table lamp to the Brera pleated cotton range. 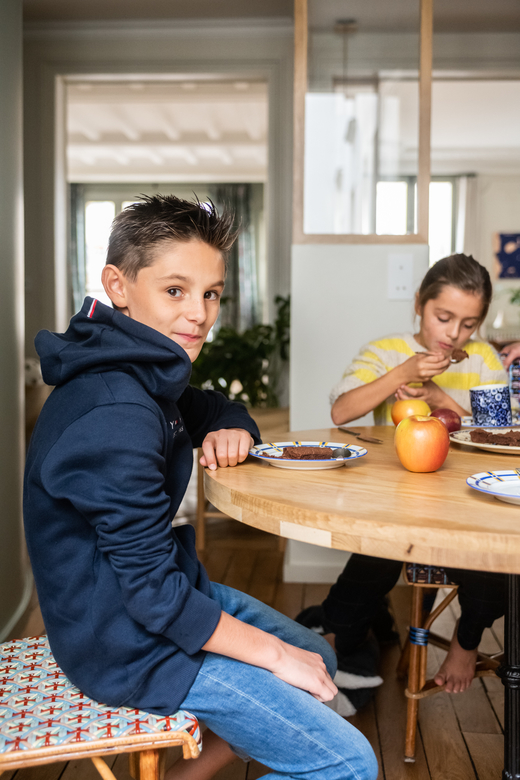 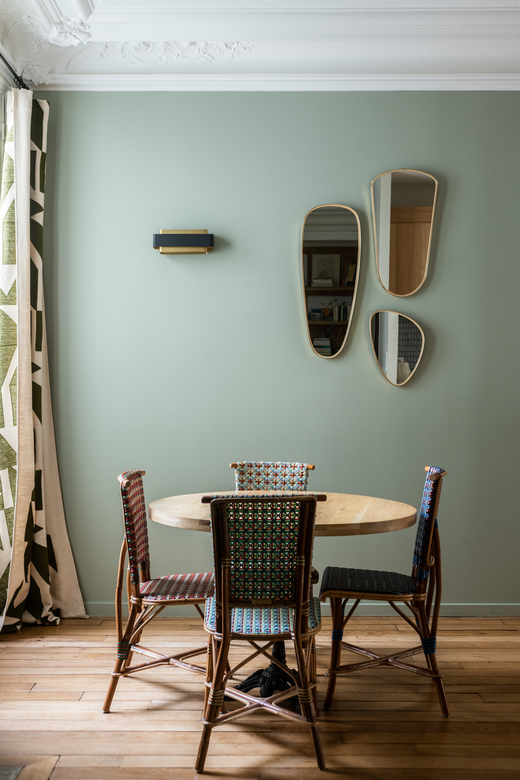 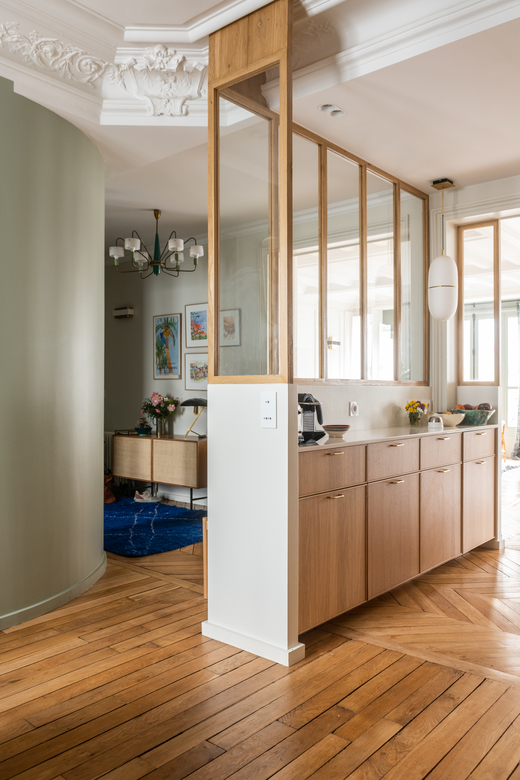 Which room do you like to be in with your family? And which when you’re alone?

As a family, in the living room around the coffee table to play a board game or to snuggle up in front of a good movie! And on your own? In our bedroom. The floral design and the colours of the Dedar fabric used for the curtains, which I love. The vintage feel of the Pierre Frey straw wallpaper on the headboard. The warmth of Farrow & Ball’s Hay yellow. The bohemian look of the Les Petits Bohèmes throw. It makes me feel really good.

I love renovating Haussmann-style apartments, and I love working for my clients, most of whom have young children. It’s a real reward to know they’re happy at home! My 2020 project is to buy, renovate and decorate a turnkey apartment for sale. But my ultimate dream would be to be able to find time to paint watercolours and exhibit. Maybe I’ll get there in 2030!

Can you share your ideal neighbourhood guide with us?

We love our neighbourhood, even though it’s severely lacking in green! The Rue des Martyrs is full of specialist food shops (I love the pavlovas from La Meringaie!). We often go to Corso, in Avenue Trudaine with the children. In summer, its terrace is ideal, with the streets being closed to traffic at the weekend. For dinner, head for Le Pantruche. That’s a must! Recently, we discovered Le Bistrot de Madeleine. It’s a real treat! On a different note, the Amélie Maison d’Art gallery, entirely renovated by Batiik Studio, is very inspiring. I also like Tema Galerie, which appeals to me a lot with its collection of aboriginal paintings and other objects. 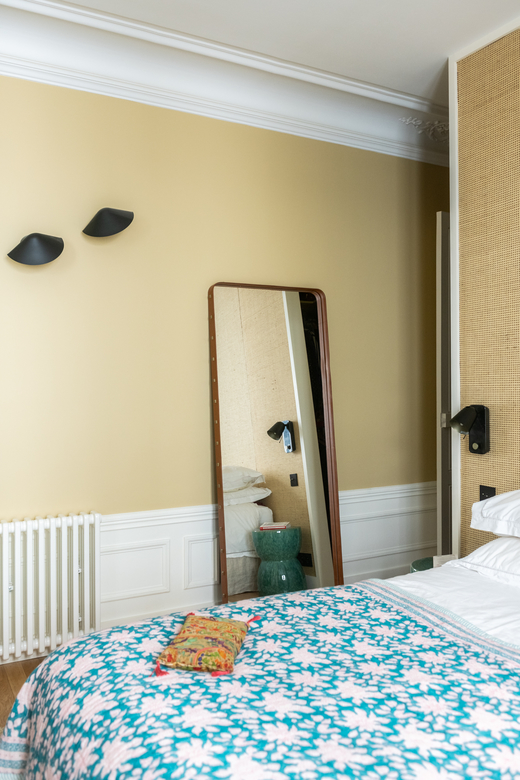 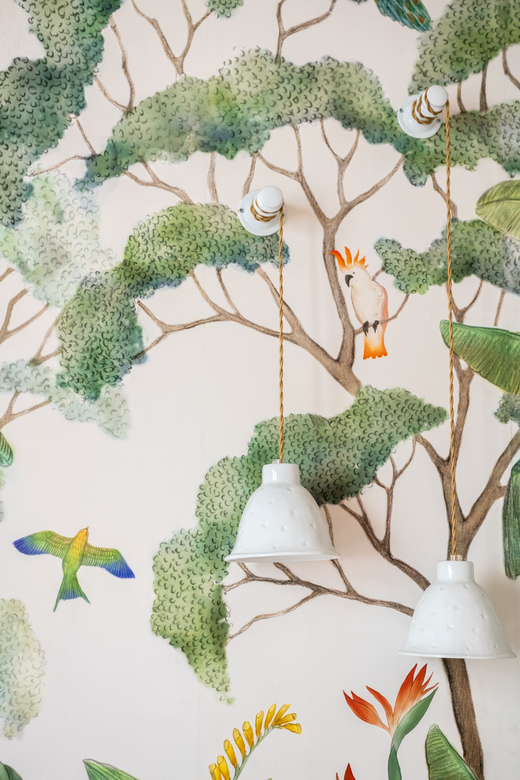 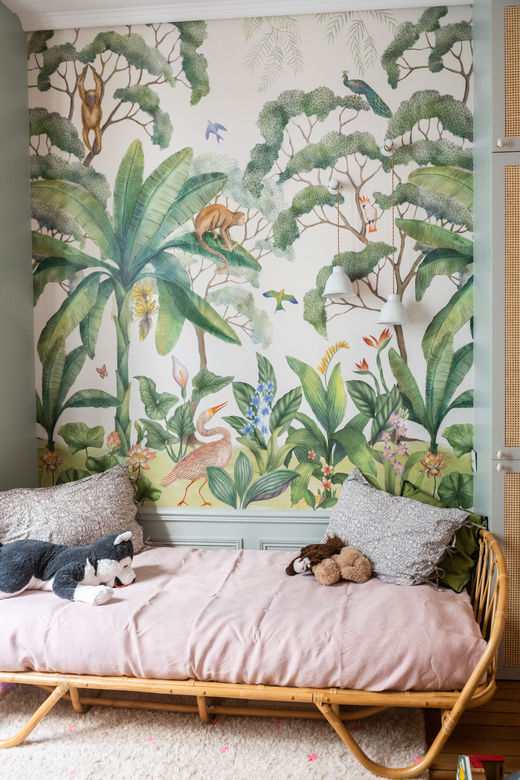 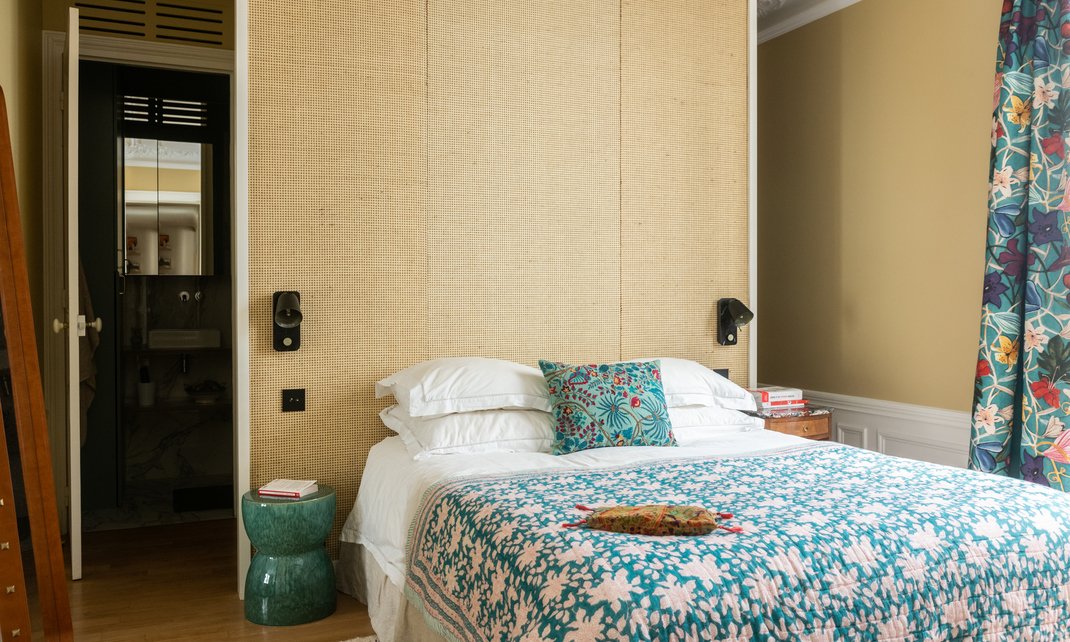 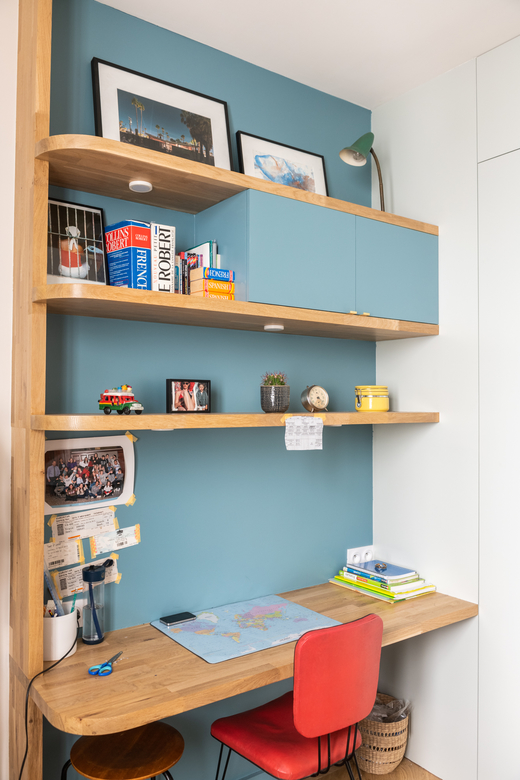 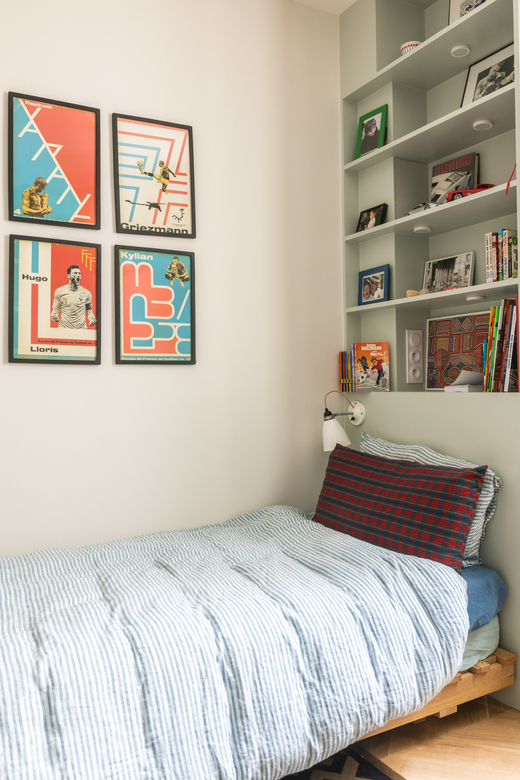 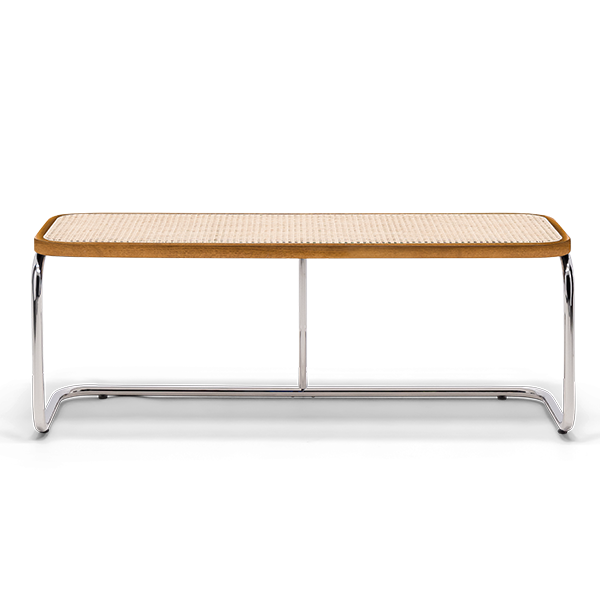 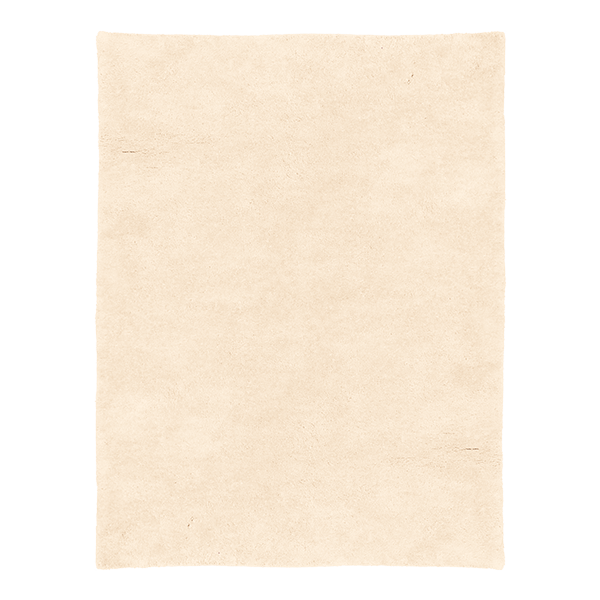 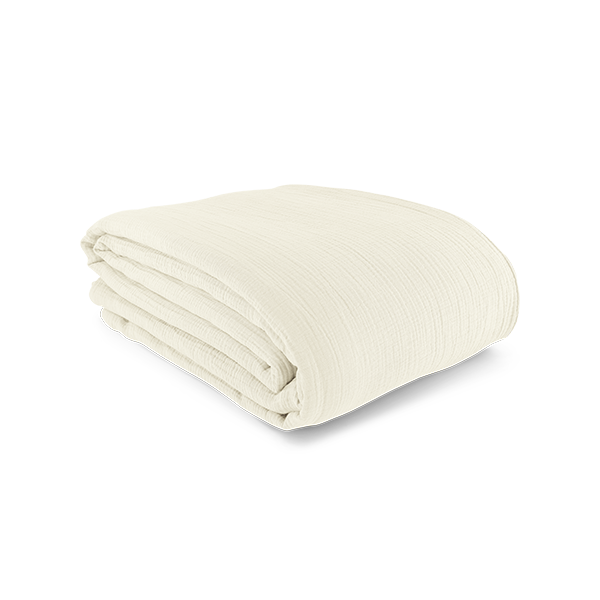 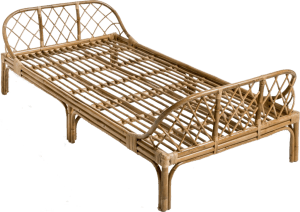 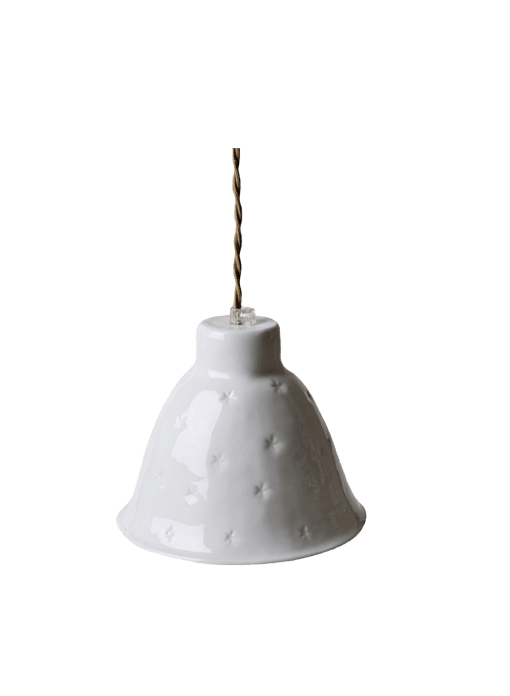 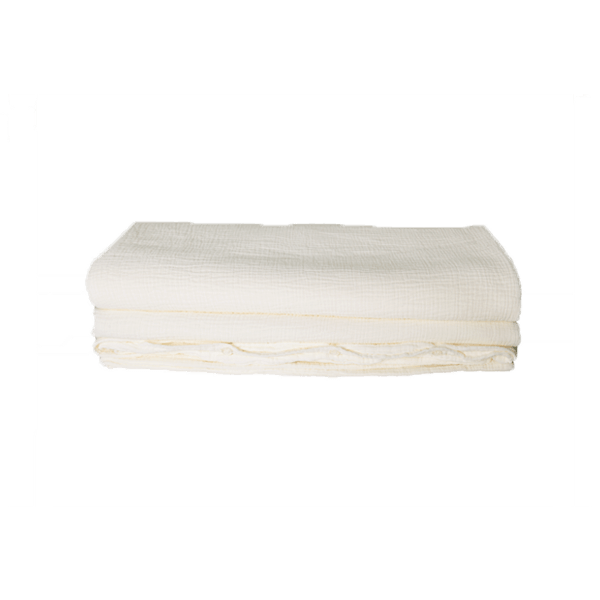 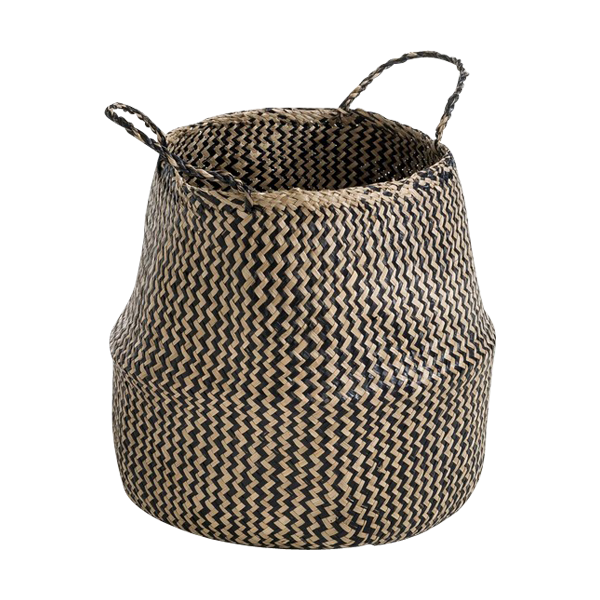 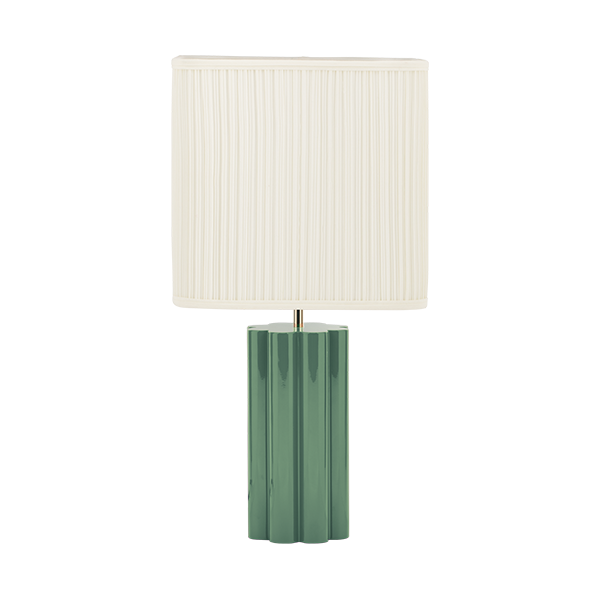 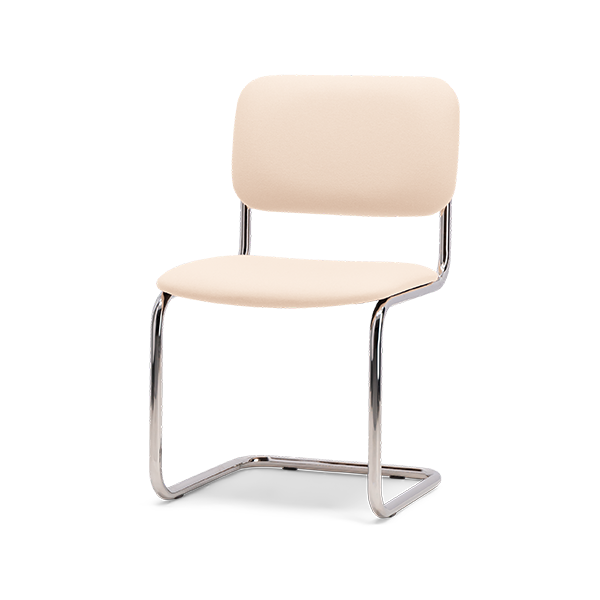 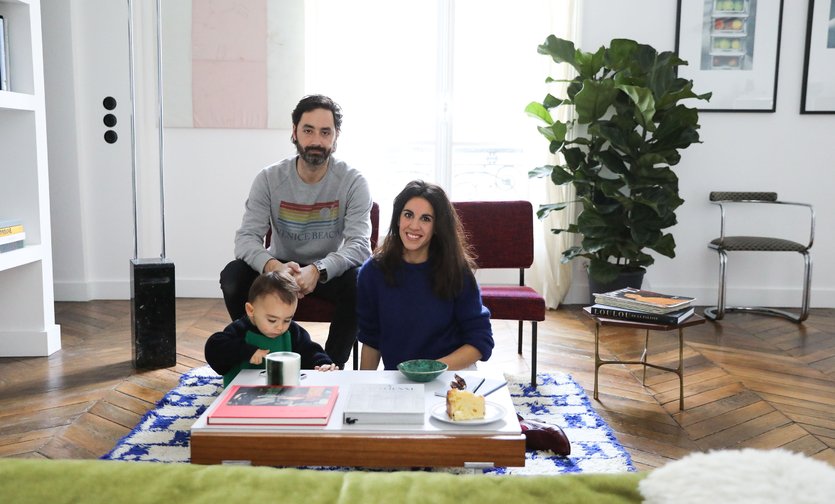 Stéphanie Lizée chose to move in the 10th arrondissement of Paris, a neighbourood completely changing near Gare du Nord. This woman coming from the south of France fell for the fresh capital city, for its courtyards, cafés, inhabitants and...

Alix Thomsen is an artist with a crazy personality! Formerly a fashion designer for her own brand, she is now spreading her wings...

The Innate Sense of Mix and Match.

A public figure and a man behind the scenes, Rasmus Michau is an entrepreneur with fingers in many pies. This night owl is co-creator of...

A meeting with one of the figures of the Parisian nightlife scene.

You were waiting for it, and so were we. After Carrie and Stéphanie, Chouquettes visited Amélie! Let’s go to Neuilly. It’s a...