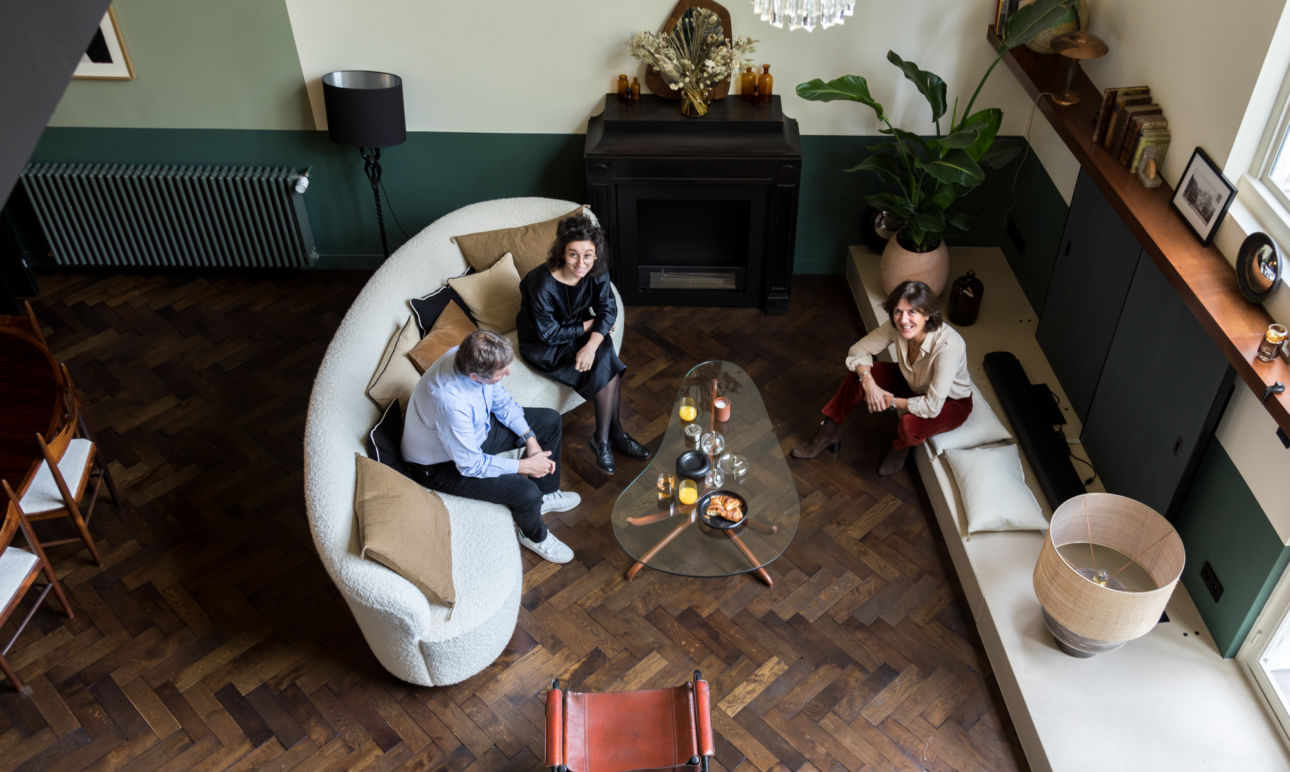 The Incredible Metamorphosis of a Former Painter's Studio in Pigalle

Paris and its streets are full of treasures! Hidden doors, tree-lined courtyards and private passageways that never cease to stimulate our imagination. In the north of the capital, the racy Pigalle area is no exception to the rule. Between the bright neon lights of the Boulevard de Clichy and the cobblestoned maze of the Nouvelle-Athènes, a multitude of architectural possibilities open up before us. Finally, it is the huge windows and skylights that attract our attention. Those of the former artist’s studio entirely redesigned by Florence Poncet for her parents. Imposing right from the entrance with its six-metre high ceiling, this splendidly conserved mezzanine construction has been transformed – thanks to the architect’s tailored approach – into a cosy and welcoming duplex. A real family project where “everyone had their own ideas, their own tastes” but above all with the same aim: to make this flat warm and welcoming without obscuring its history. To bring the space – impressive but austere – to life, the young woman applied herself to rethinking the layout and the very nature of the spaces. Opening them up and thus gaining in fluidity, it was time for a new palette of colours. Shades of green, punctuated by touches of black, “reflect the atmosphere of the place, enriched by its elegant, luxuriant setting” while linking the rooms together. The structure Florence has designed, combined with dark wood tones and ornate fabrics, has finally established its own personality in the constant light offered by its north-facing aspect, once coveted by artists. First and foremost, it is a style that suits Marie and Pierre, lovers of expressive décor, and which also fits in perfectly with the neighbourhood and its image. “Colourful, leafy and eclectic with a mixture of periods” as we discover in the choice of furniture and lighting, some antique and some designed for the occasion. 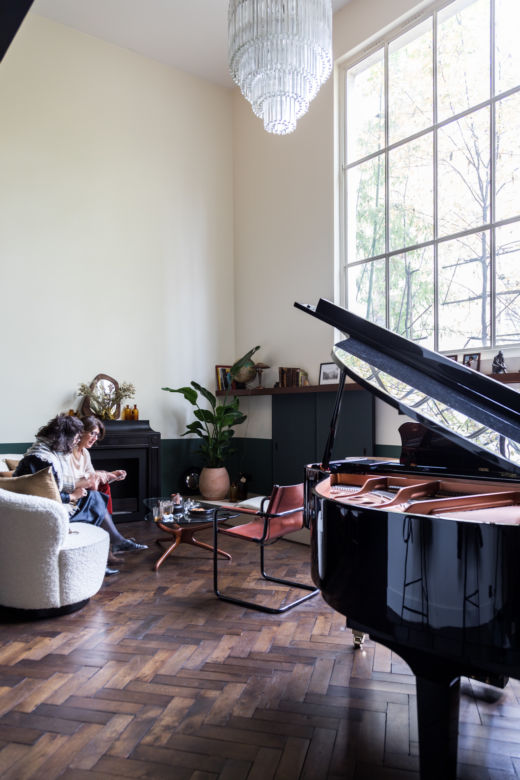 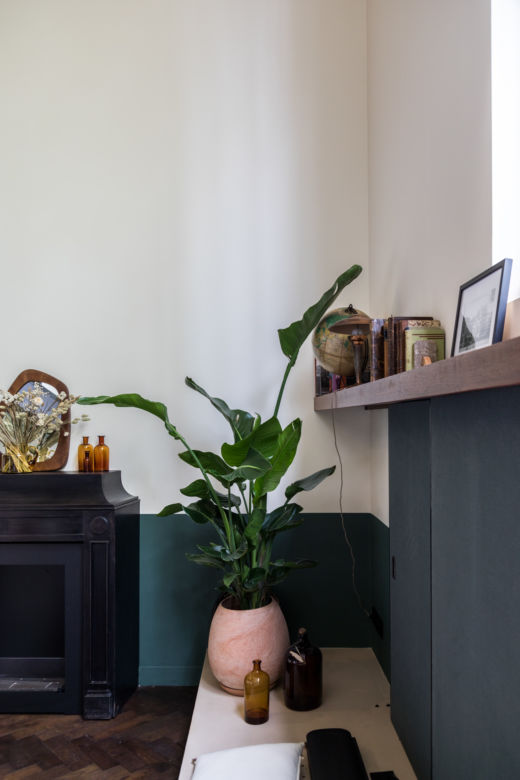 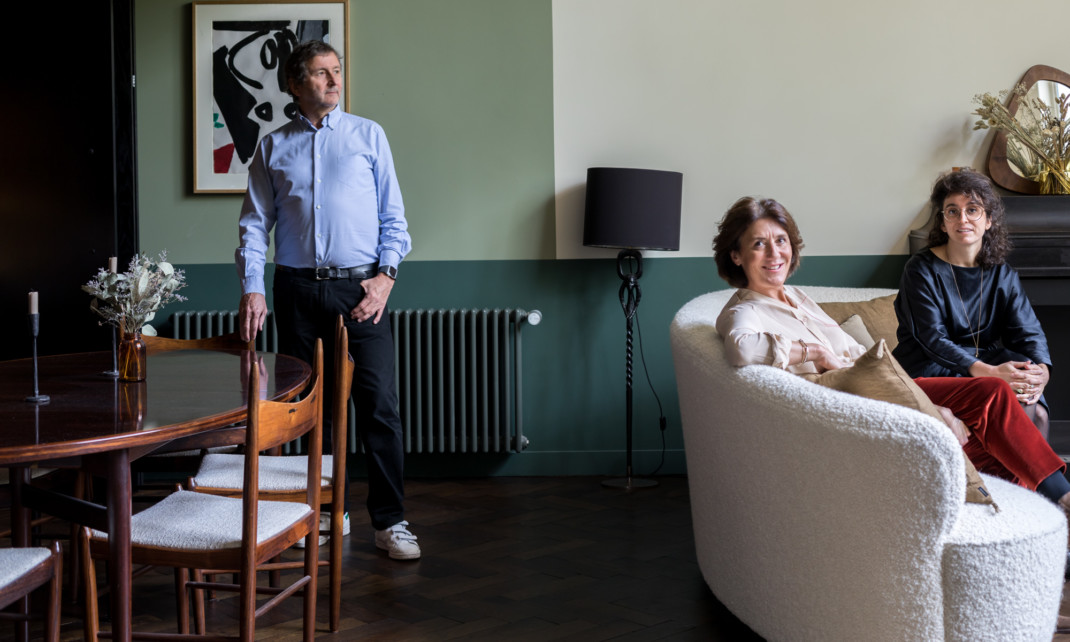 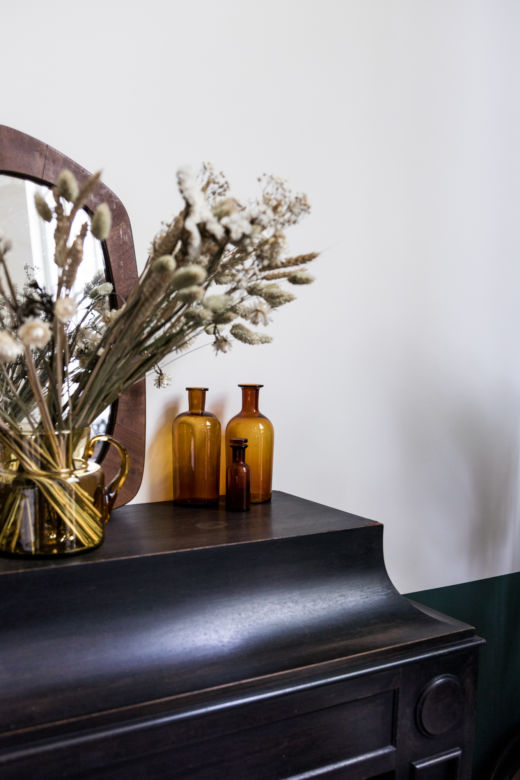 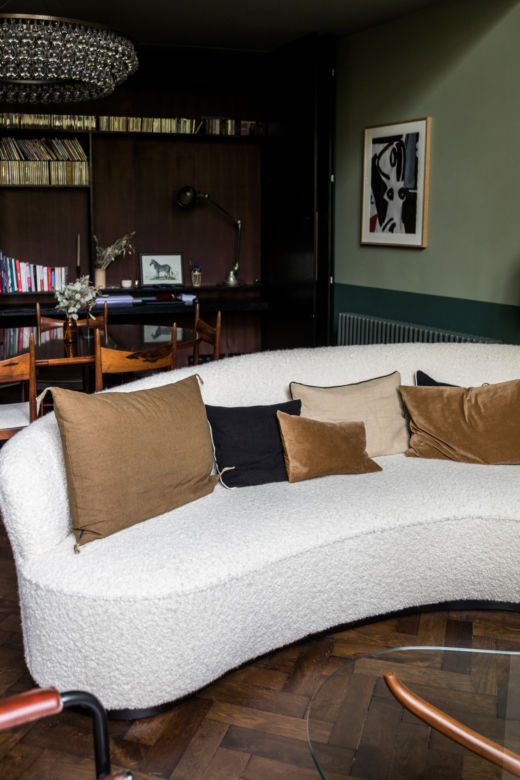 Marie, Pierre, Florence: can you introduce yourselves, please?

We’re retired, we live in the provinces, and we love Paris very much. We dreamed of having a place where we could enjoy the capital and entertain our children. Quite spontaneously, I asked my oldest daughter Florence, an architect and interior designer, to think about this project with us.

Tell us about this incredible place.

I had scarcely started searching when I fell upon this former artist’s studio, situated in the ninth arrondissement of Paris. I fell in love with it immediately! To be on the safe side, I asked my partner and Florence to come and visit the apartment. They immediately confirmed my first impressions. The spaces were incredible!

Indeed, I didn’t hesitate for a single moment. This apartment had all the right qualities, and it had immense charm! That said, you did need some imagination: the spaces were unstructured, austere and dark. For me, the challenge as an architect was to rethink the layout of the spaces, to make the apartment warm and cosy.

I, too, immediately sensed the potential of this apartment. I was impressed, and I was struck by the large glass roof in the living room. Open to the north, it used to provide the right light for artists who painted their canvases in the double-height space. I agree with Florence about her first impressions. We visited the flat on a winter evening, and I must admit that the double height made the living room cold and rather unwelcoming.

When – and how – did you decide to work on it together as a family?

The decision came about quite naturally. The apartment clearly needed a rethink. We asked my daughter to take on the project… and she accepted with pleasure, I think!

Yes! On the one hand, it was a very (very) interesting subject for me and, on the other, it was a real opportunity to work on a project as a family. I was delighted to bring my skills to this great family undertaking. It gave new meaning to my profession.

At the beginning, I was a bit wary of embarking upon such a project as a family. Everyone had their own ideas, their own tastes, and, in the end, it was a terrific experience. 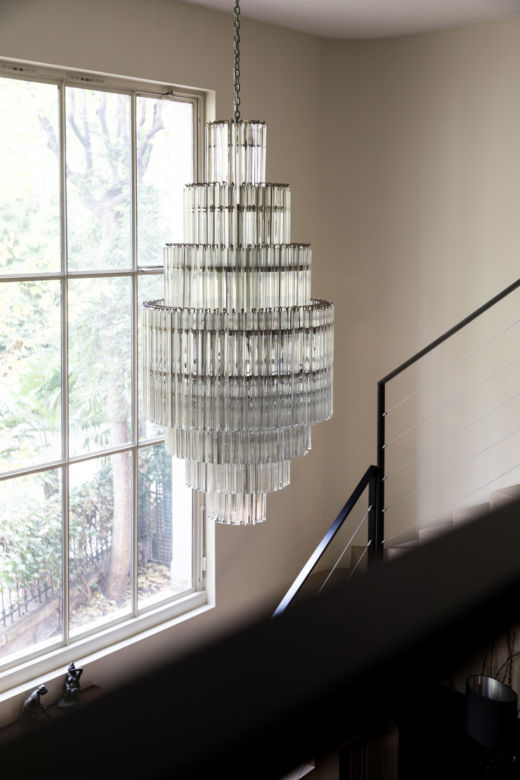 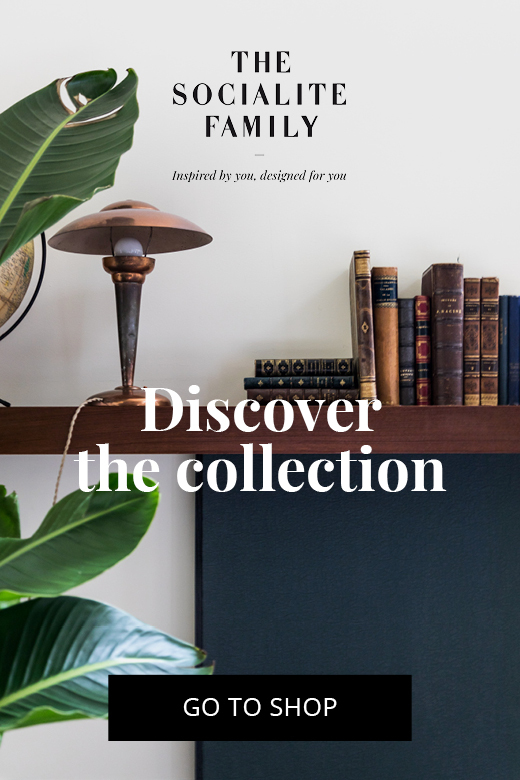 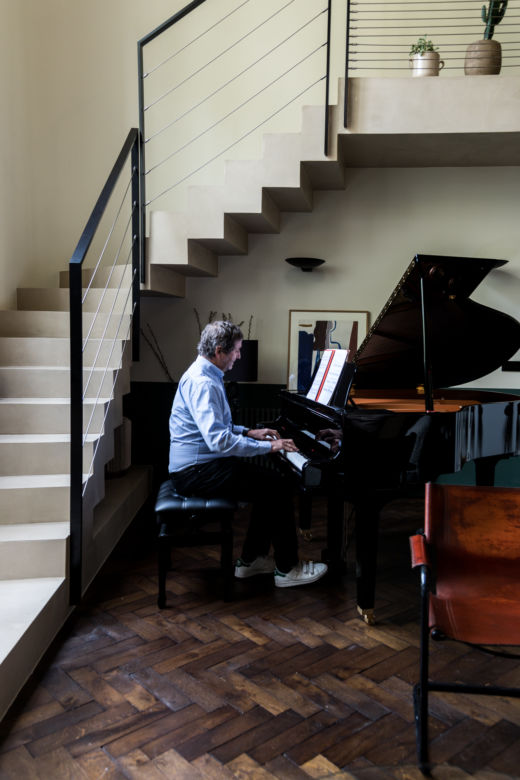 I also wanted the flat to be a sociable place with an open kitchen and a large living room. As we have lots of guests, I like the idea of all the rooms communicating with one another. 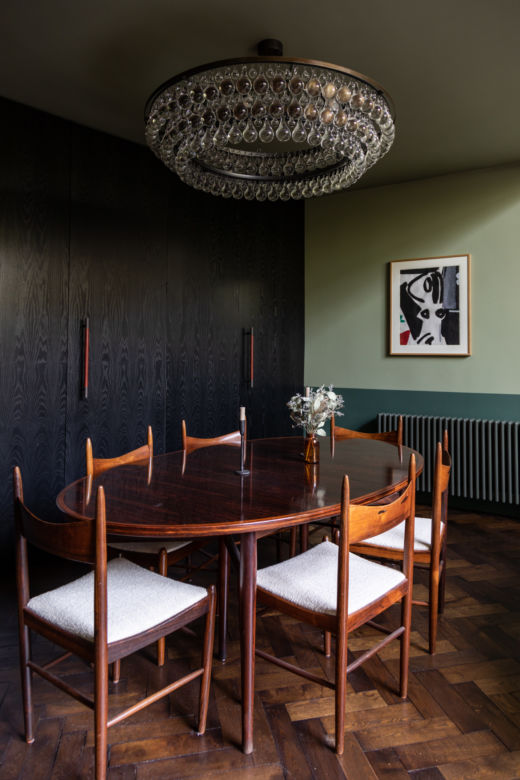 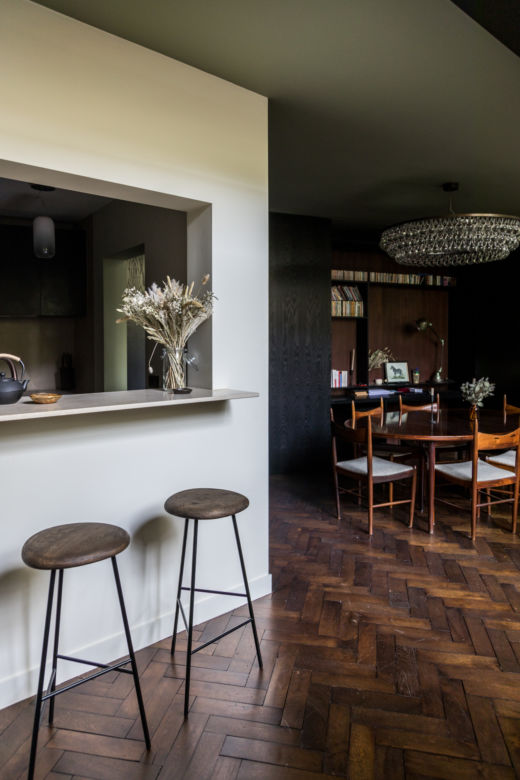 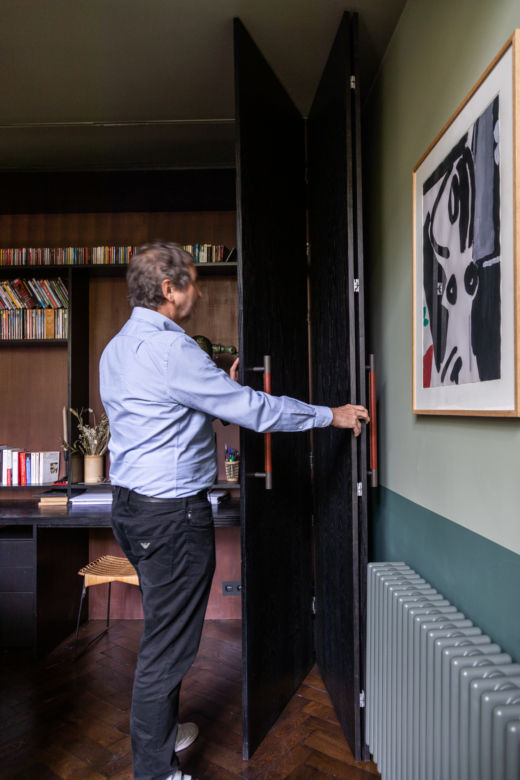 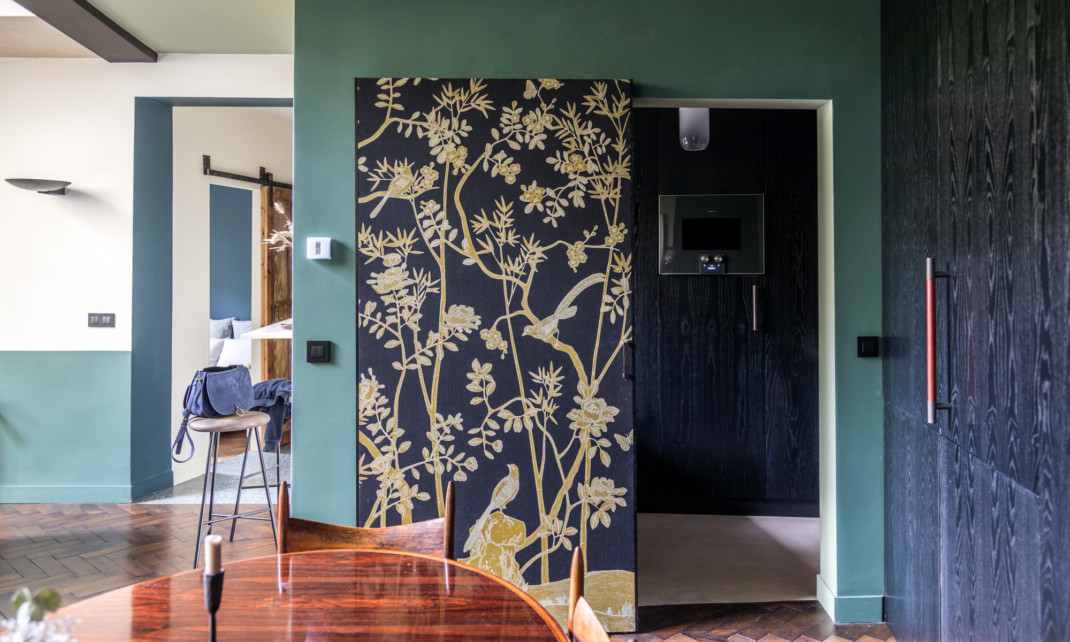 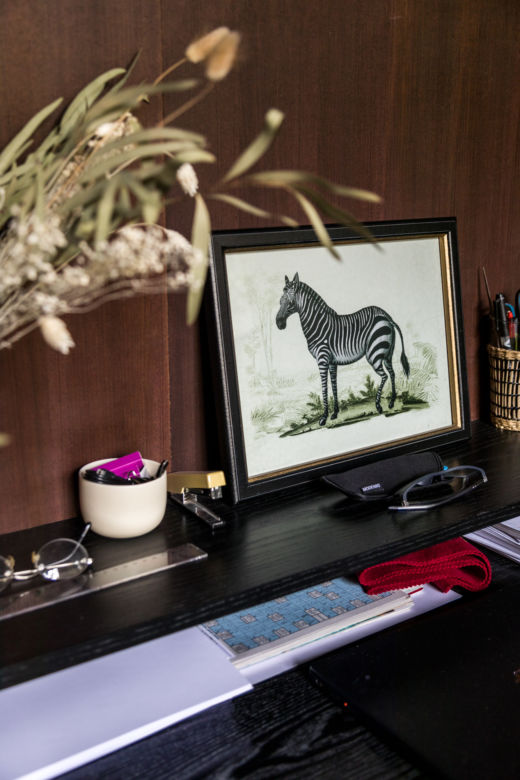 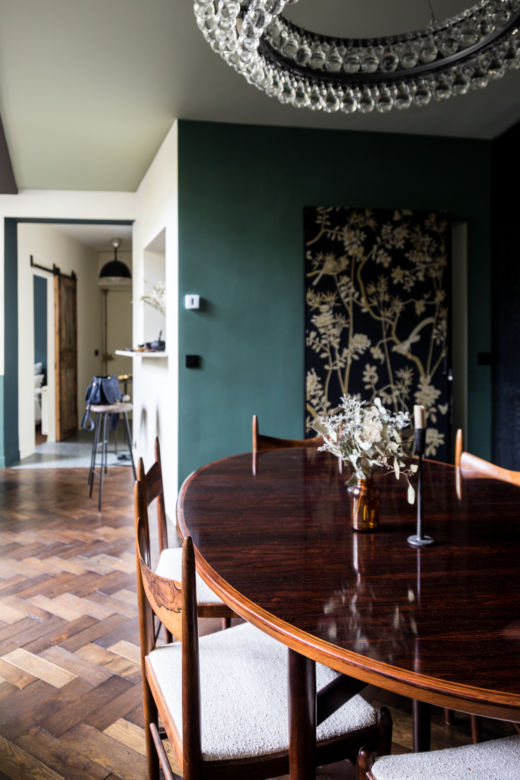 How did your relationship change, and what did it bring to this project?

Obviously, it brought us closer together! We spent a lot of time together. For example, there were both happy and stressful moments during the work. And fortunately, we understood each other very well! Our qualities, as well as our faults. And we were all able to appreciate each other.

Marie, Pierre: Did you have a clear idea of what you wanted, or did you give your daughter a totally free rein?

First of all, Florence offered us a very light atmosphere, a blend of whites and beiges. I must admit that I personally feel better in strong and expressive spaces. I love black and natural materials. So Florence bounced back with a very colourful, plant-inspired atmosphere, punctuated by a few elements of black. I also wanted the flat to be a sociable place with an open kitchen and a large living room. As we have lots of guests, I like the idea of all the rooms communicating with one another.

In terms of decoration and ambience, I had no specific ideas. However, I wanted to make the spaces very functional, and I wanted the main room to be as uncluttered as possible. It was important that the kitchen was efficient and properly separated from the living room. This was a significant challenge for Florence because my partner wanted precisely the opposite! My daughter then suggested that we work with custom-made furniture. She designed furniture with folding doors and sliding panels that allow you to open up or close rooms off, to make the various spaces flexible, especially the kitchen, and the mezzanine that serves as an office and second bedroom.

Florence, what were the different stages in the transformation of this place?

Originally, the kitchen was opposite the bedroom, and the bathroom gave onto the dining room. I started by reversing the two! Then, I designed the mezzanine as a multi-purpose space: office and second bedroom. I created a system of sliding panels to open or close the room. The mezzanine becomes an office with an outside view or a bedroom with fabric walls. A dressing room and toilet have been slipped discreetly behind the woven wallpaper-covered partition, making the bedroom separate.

What were the inspirations that helped you create this place?

Like the neighbourhood, I imagined it as a colourful, eclectic, leafy atmosphere, a mixture of eras. For me, the history of the place had to be clearly retained in the apartment. I also wanted to create a place that would suit my parents, a space in which they felt comfortable. Having combined these two objectives, we started with a scheme using greens with black. Next, I matched the dark woods (flooring, shelves and furniture) and fabrics with a touch of ochre to bring in some warmth. Then, I went hunting for the furniture and the lighting, mixing periods and styles, while sticking with tones consistent with the general ambience. 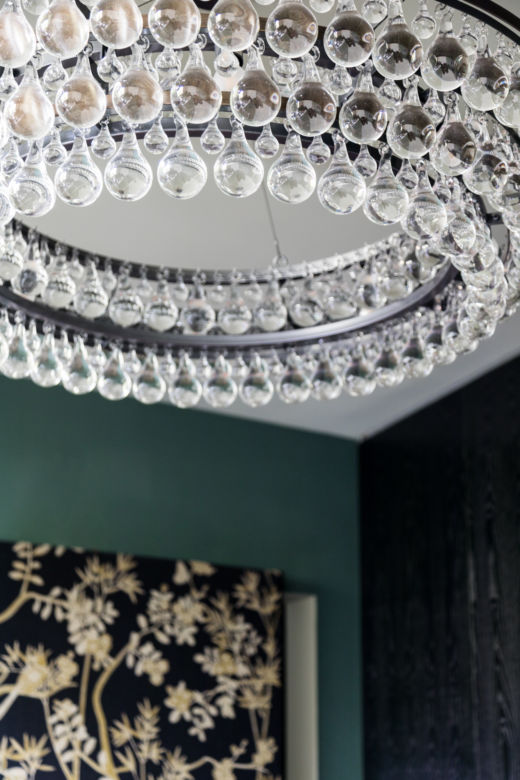 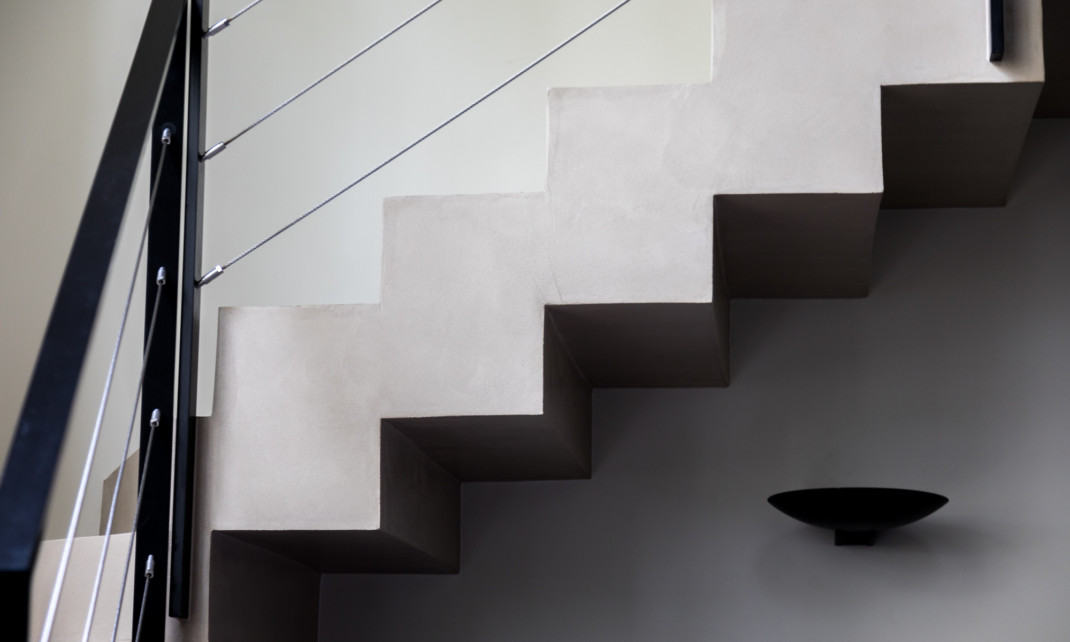 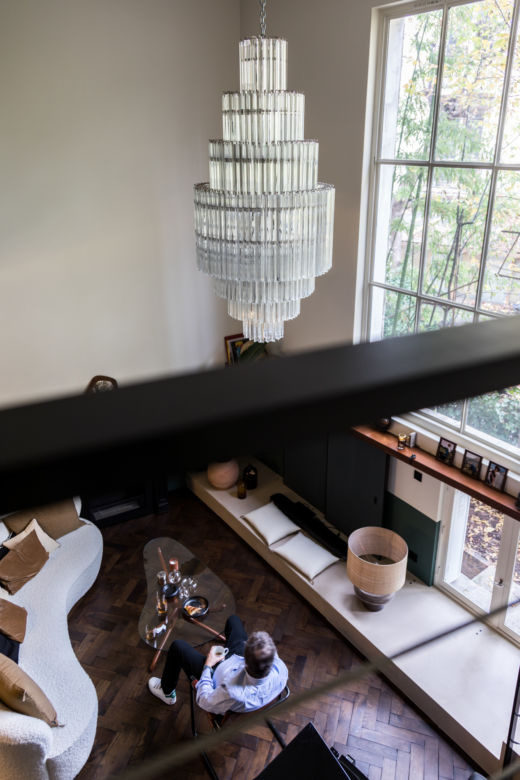 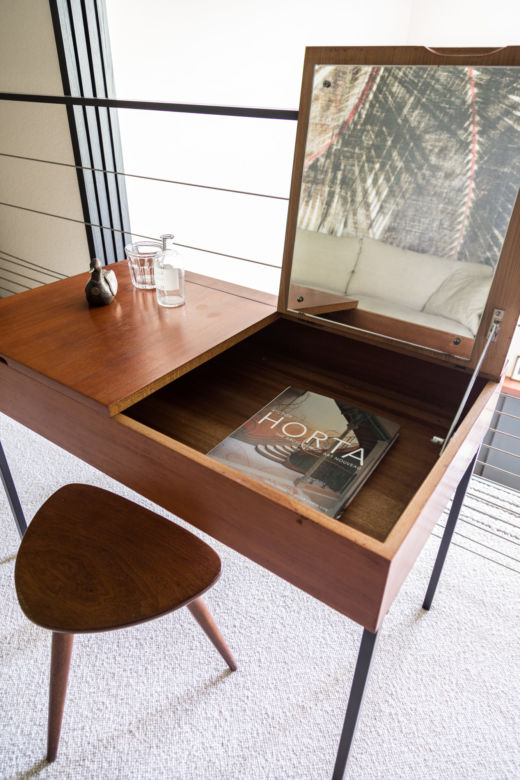 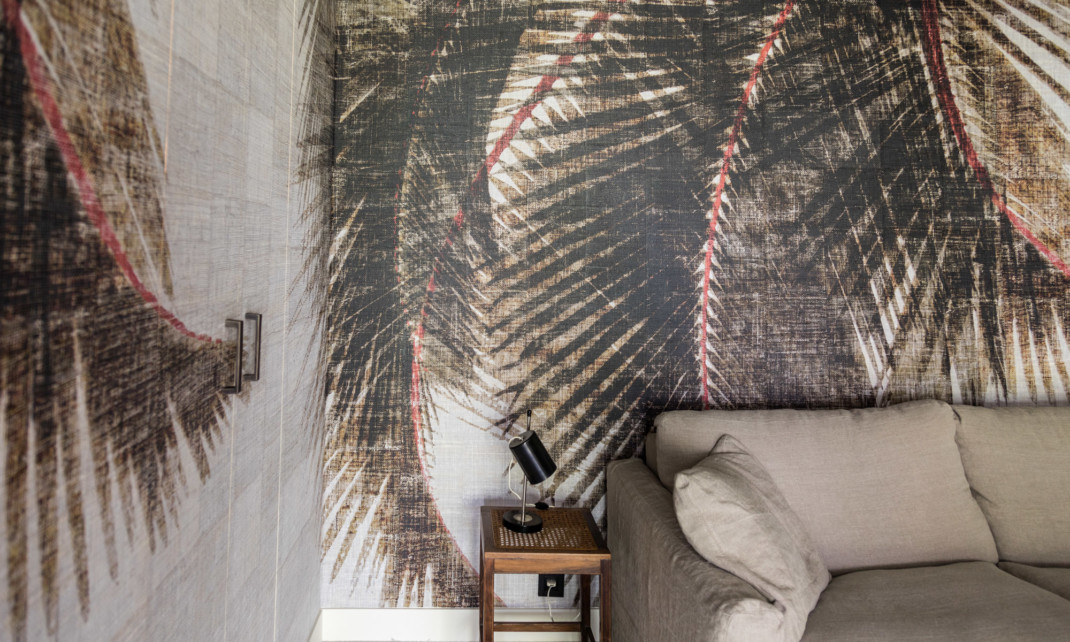 You played a lot with colours to frame the spaces. Why did you choose these in particular? How did you use them?

I suggested a range of greens instinctively. They are colours that please all three of us! I also think that they reflect the atmosphere of the place, rich with an elegant and luxuriant feel. I used the colours to create a variety of atmospheres by linking the spaces together and giving the right proportions to the living room. The double-height living room wasn’t a pleasant place to begin with: dark wooden flooring, white walls and the ceiling six metres above your head. I designed a dark coloured basic framework that focuses attention on the human-scale part of the space, leaving the rest of the double height in light colours to avoid the feeling of being crushed. I’ve combined the base colours with thick, colourful fabrics to make the living room enveloping and warm. To link the dining room to the living room, I extended the base and added a lighter green to the walls and ceilings. The dining room has become an extremely colourful and convivial place.

The architecture was down to you. But did all three of you have a hand in the decoration?

Initially, we did have some preconceived ideas. We thought we liked this or that. As the weeks went by, Florence listened to us and brought in her ideas. We ended up understanding that she had an overall vision and a feeling about the composition we didn’t necessarily have ourselves. She had a very clear idea of the final result, so we let ourselves be guided. We are very happy with it!

It’s true that from the start I had a very precise idea of the final result. It was more of a feeling, a feeling of atmosphere, more than a visual idea. It wasn’t easy to express. We talked a lot about each element of the decoration. In retrospect, I think we pushed each other to improve the project. For example, I curbed their desire for black by shading with red woods which, in the end, lit up the rooms. Equally, they pushed me to choose a wooden door for the bedroom, which brings a natural look to the entrance, which has a very delicate and finely drawn ambience.

Which room most symbolises the spirit of this place?

For me, clearly, the living/dining room. It’s the first thing we see when we come in, and always gives us the same pleasure!

The ninth arrondissement is a fascinating area. Which are your favourite places to frequent here?

I love the atmosphere of Rue Cadet, the jazz bars in the neighbourhood and Place Saint-Georges! 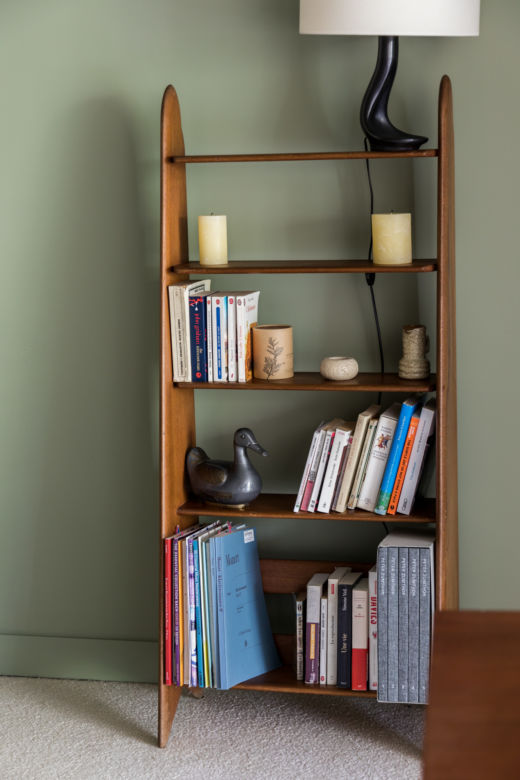 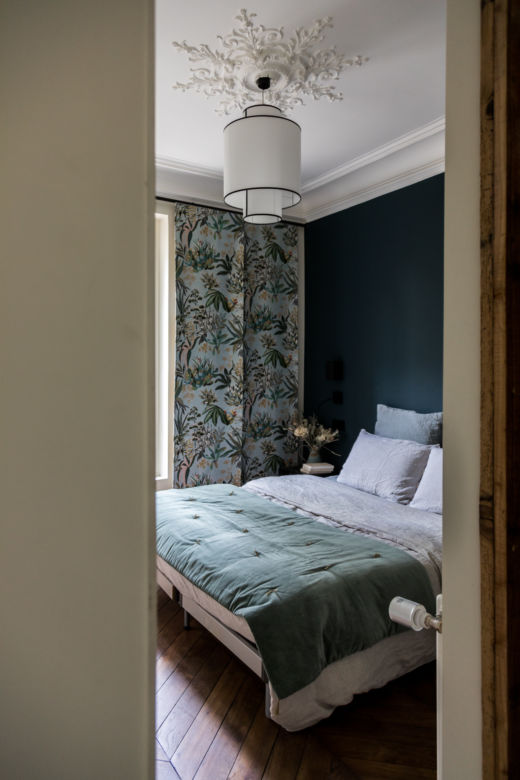 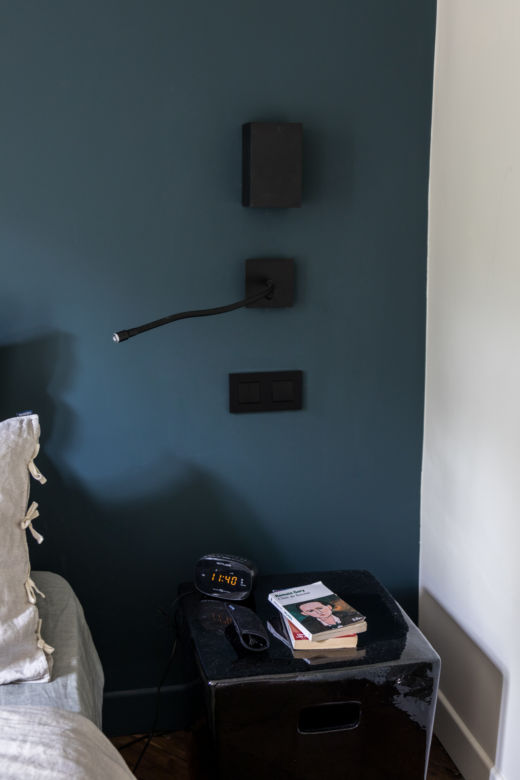 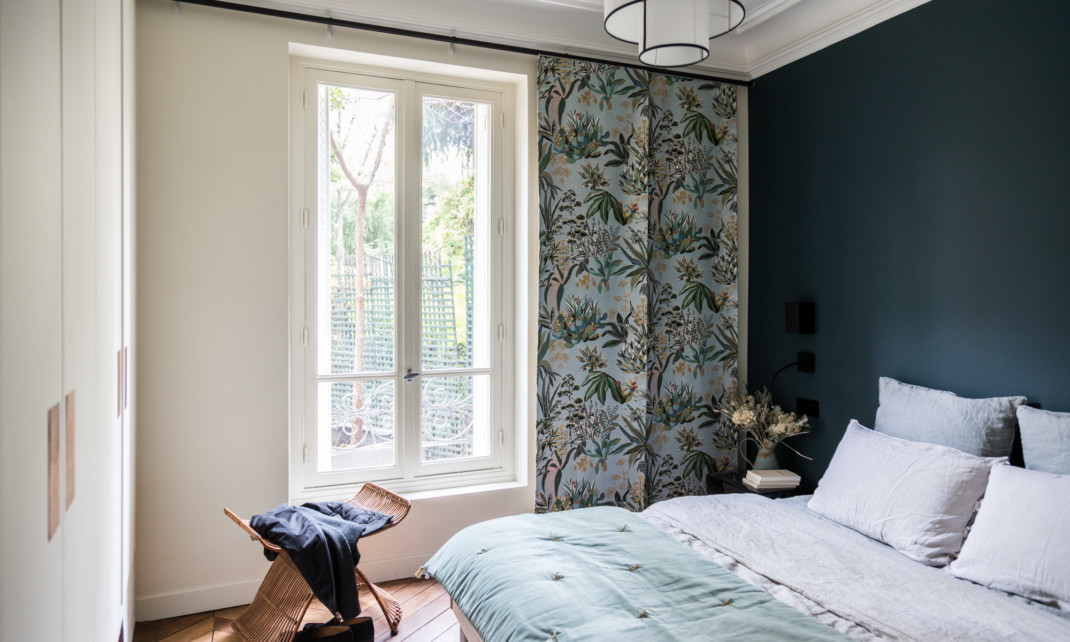 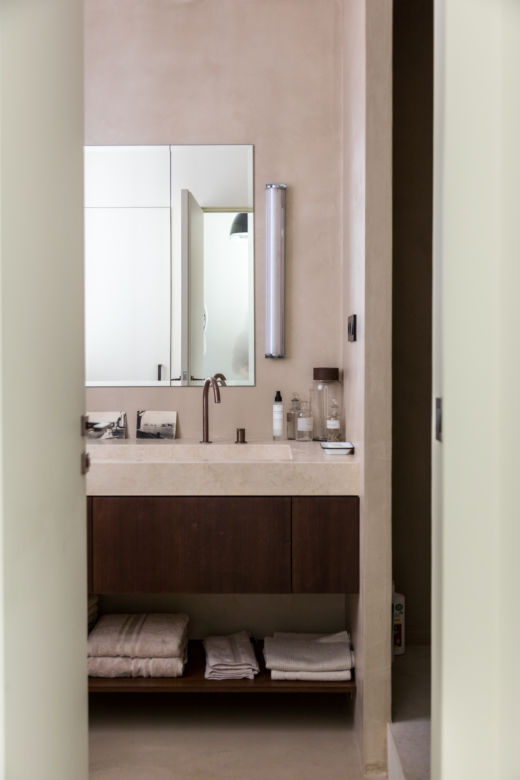 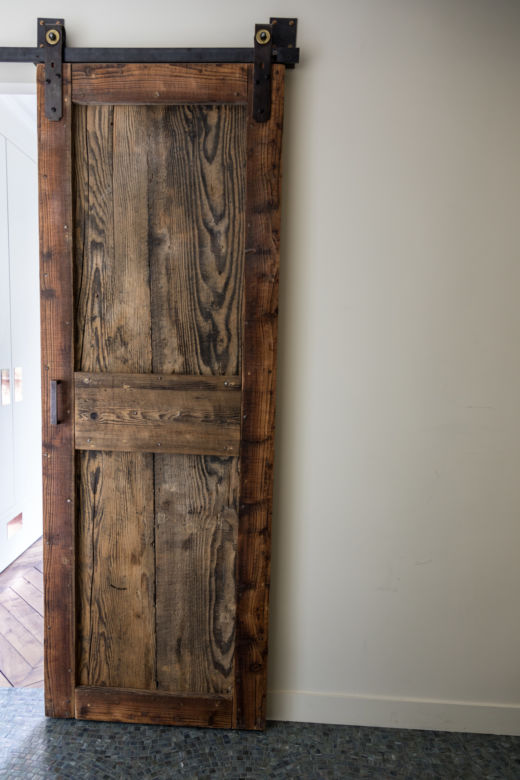 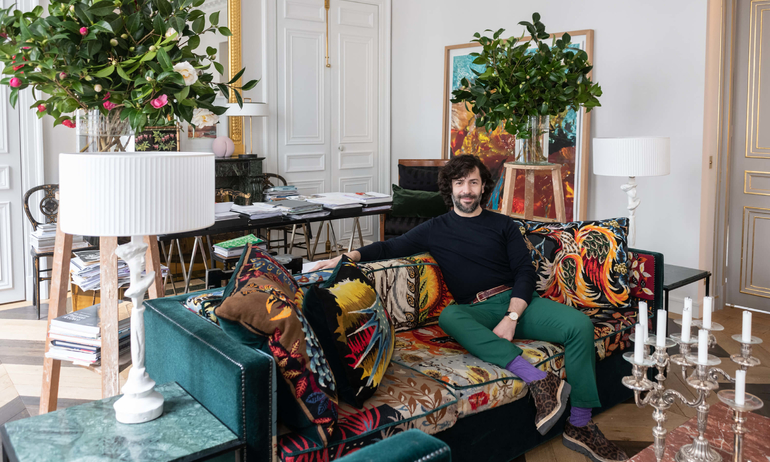 Alexis Mabille, Between
Fashion and Decoration

It is a pleasure and a huge privilege to meet designer Alexis Mabille at his home. Designer, because while the term is precise enough to evoke the world of creation for all of us, this term does not encompass any specific field. It refers, above...
Previous article
Next article

Mathilde and Jérôme have recently moved to Montreuil, and are among those who prefer a large, spacious house to a one-bed Parisian...

In Montreuil, where vintage furniture is becoming a matter of religion...
Family - Paris 21/03/21

Chrysoline de Gastines is fond of Paris’ 9th arrondissement. Life in this district reminds her of her home town, Lille; easily...