“We don’t invent a strategy; we just fall in love with something, and the magic works”. These words of Frédéric Biousse perfectly sum up the whole spirit of the Domaines de Fontenille, a hospitality collection that includes Les Hortensias du Lac. A new concept in “luxury” hotels, although the co-founder of Experienced Capital, and his companion Guillaume Foucher, prefer the term “designer”. Designer hospitality, then, is for these two first and foremost a philosophy. Buildings, five in all, acquired as separate houses. Their own. And designed as such! From the interior decoration, designed in collaboration with Béryl Le Lasseur, to pieces of art and even the playlists or the tableware; the couple are involved in every aspect. “Our whole aim is to respect the emotion felt on discovering the place for the first time”, smiles the creator of La Galerie Particulière, who decided to end that chapter of his life in late 2019 so that he could fully consecrate his time to this new artistic playground. But back to Les Hortensias du Lac, which at the time of writing is Frédéric and Guillaume’s most recent acquisition. With its laid-back feel similar to the surf hotels of The Hamptons, this Landes beach-style villa, built in the 1930s, is also the group’s first on the Atlantic coast. In Hossegor to be exact, where it overlooks the saltwater lake, a stone’s throw from the Ocean. An amazing location, faithful once again to the philosophy of the Domaines de Fontenille which aims to be present in the most beautiful spots in Europe. To complete the picture are a brand new 450m² spa and a large restaurant in a completely natural setting, where the chef Philippe Moreno (who previously worked under Gérald Passedat) dreams up superb dishes that bring out the best in local produce. Perfectly managed simplicity for luxury that is totally assumed: what a success for the opening of the first “surf lodge” in France to be mentioned in the Guide Michelin. One thing is certain; the future expansion of the Domaines de Fontenille is worth following very closely! 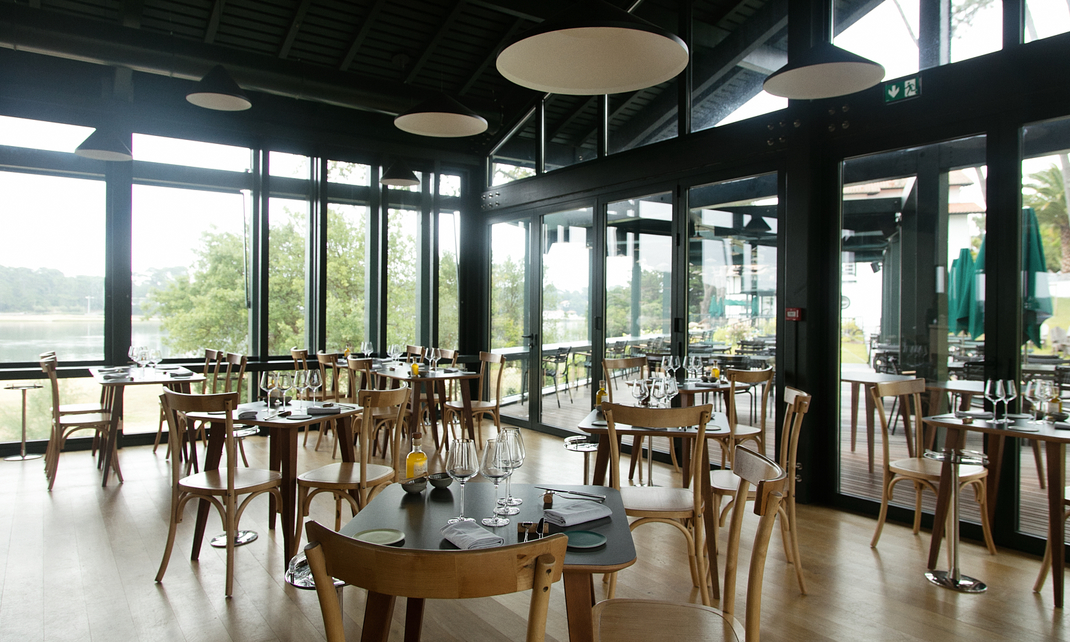 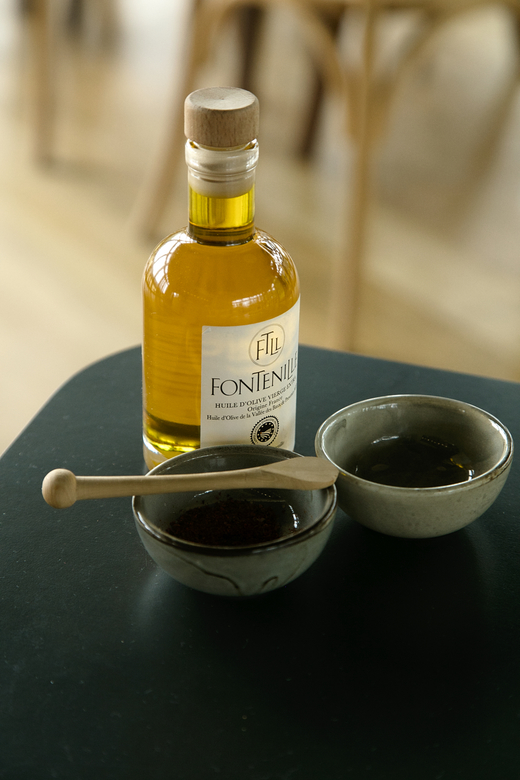 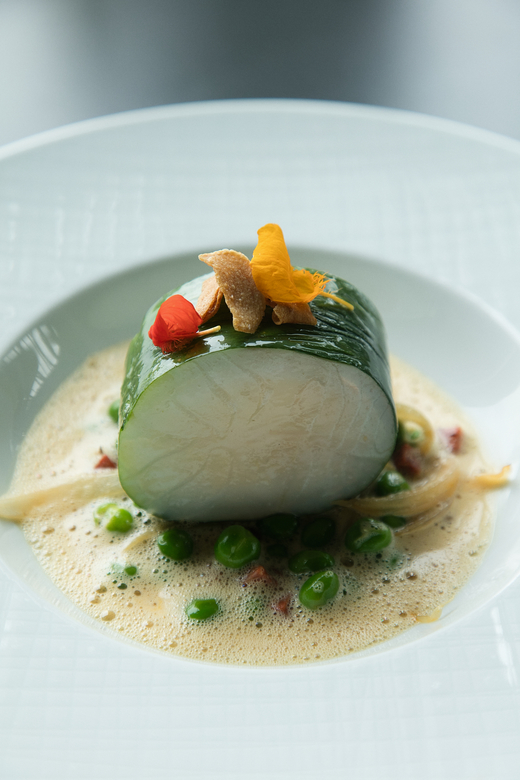 Guillaume, Frédéric: What were your respective careers before you became the founders of Domaines de Fontenille?

I am originally from Charente, I’m 42 years old. A graduate in art history and from the Ecole du Louvre, after my studies I began my career as a consultant in the sale and acquisition of works of art, from the Impressionists to the 1960s, for private collectors and museums. Over time, I became very interested in photography. In 2009, I founded La Galerie Particulière, dedicated in part to my passion – it specialises in contemporary works on paper. I travelled a lot between Paris and Brussels (where the gallery was located) but also around the world to meet the artists whose work I was going to exhibit in my properties… or in my living room!

I am 50. In my earlier life, I followed the perfect career path of businessman in the world of luxury before setting up Experienced Capital in 2016 – an investment fund dedicated to supporting the development of French fashion brands – with my two long-time partners Elie Kouby and Emmanuel Pradère. In parallel with the development of Domaines de Fontenille, I am also working to defend elephants in Africa with The Ivory Association, a foundation that supports and raises the profile of social and agricultural initiatives in several sub-Saharan countries.

How have your previous experiences been of value to you in bringing this new project to life?

Our qualities (and faults!) are highly complementary. Frédéric is very comfortable with the whole banking and administrative side of things. My studies as an art historian have given me a knowledge of and great respect for our heritage. Through our respective professions, me with my galleries and Frédéric with his lifestyle brands, we’ve travelled a lot and visited many hotels. This gave us the desire to create a unique collection, anchored in the region but, above all, manageable, and with people in mind. Our properties are boutique hotels that are run like family homes.

Why establish this collection of hotels, and with what object in view?

Everything was done in a very empirical way. We fell in love with the Bastide de Fontenille, which was in ruins. Converting it into a hotel allowed us to finance its renovation. Fontenille went well from the outset. Seeing the house come to life again and welcoming the public was a great pleasure and a great pride. Shortly afterwards, we visited the hotel that was to become Les Bords de Mer. Its exceptional location by the Mediterranean Sea captivated us completely! So we decided to buy it and renovate it. And then there was Minorca, and then Hossegor. Originally, it was really a meeting between us and a building that we wanted to see come to life again. But it was also a return to the land! Fontenille is a vineyard, and it needed to be restructured. We were lacking reality to a degree in our Parisian lives. Contemporary art and fashion are rather special niches. Being responsible for an environment, but also dependent on the vagaries of the weather, not being able to go faster than the nature: all this brought us back to a more humble and hedonistic view of life. 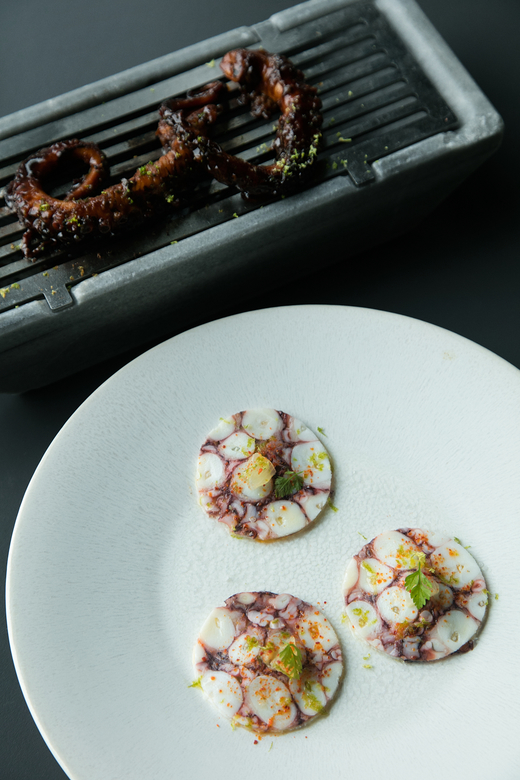 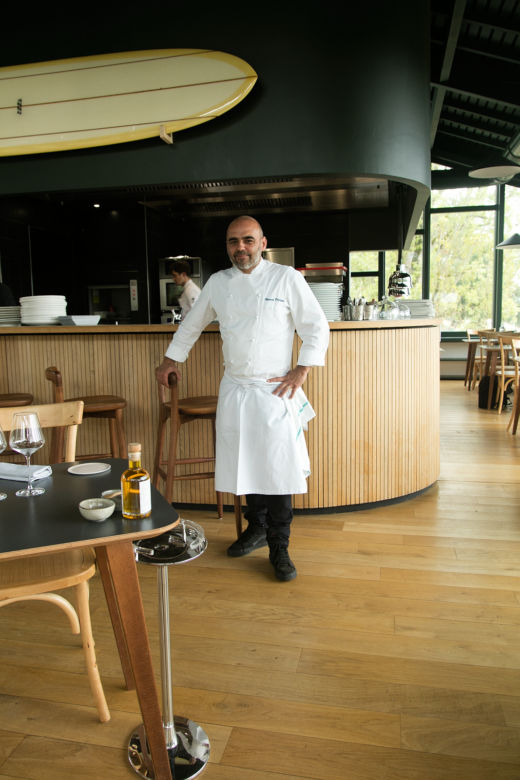 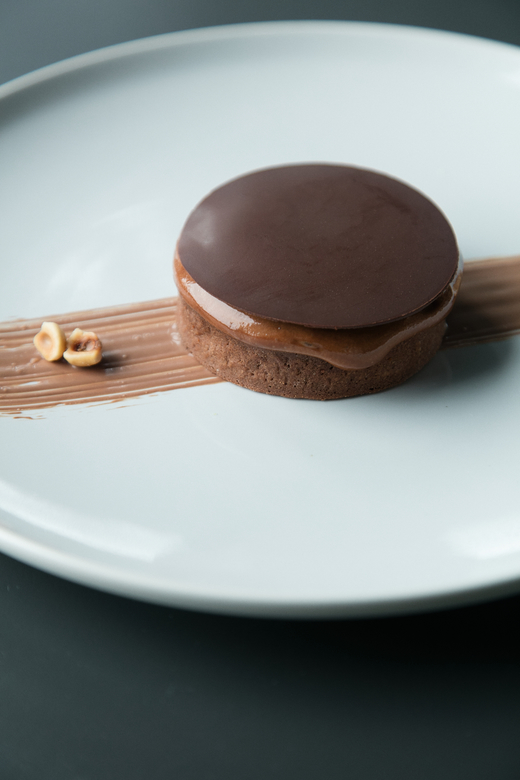 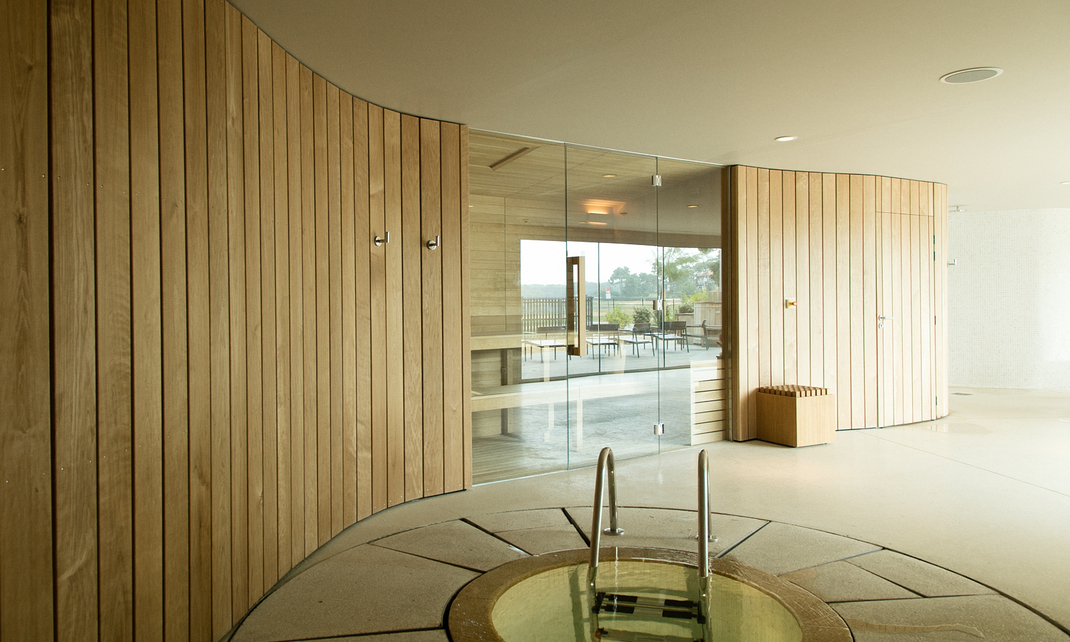 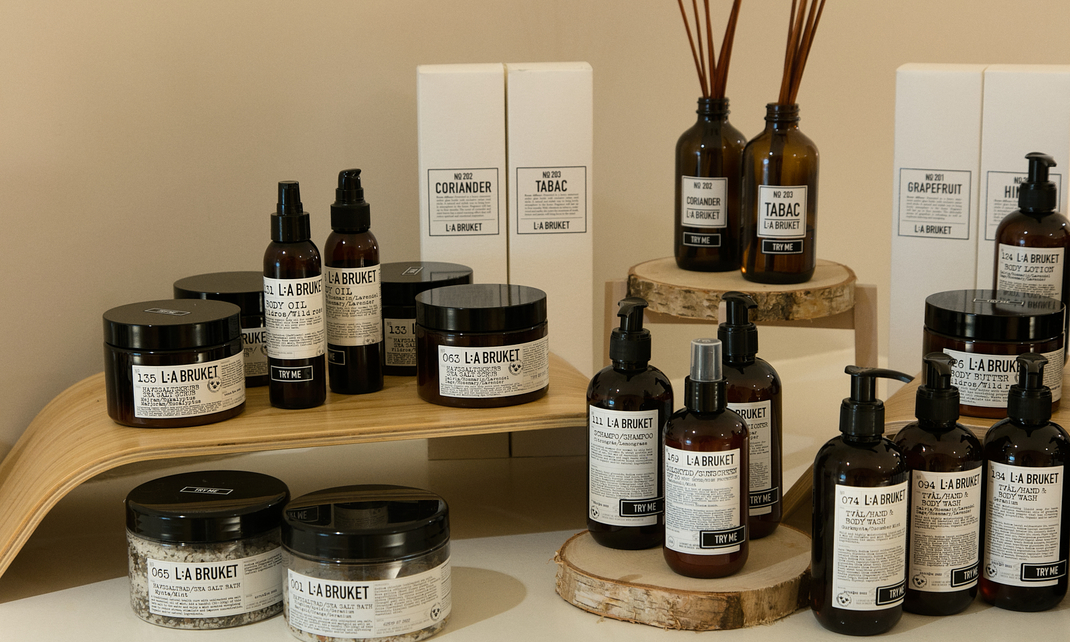 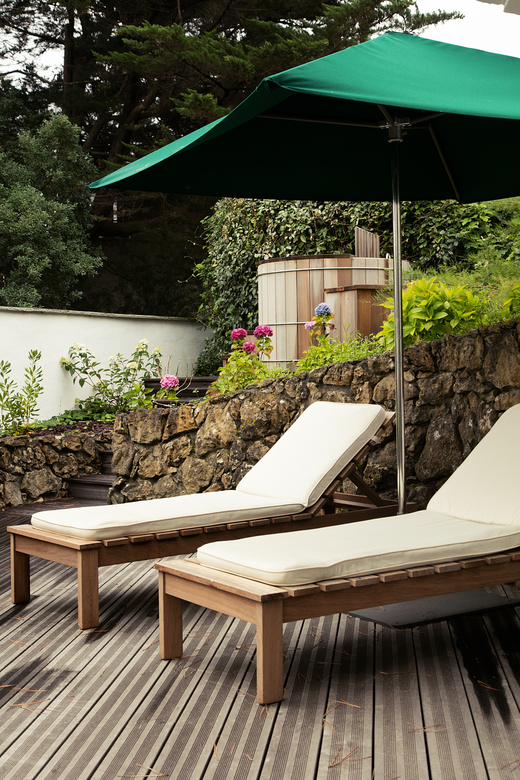 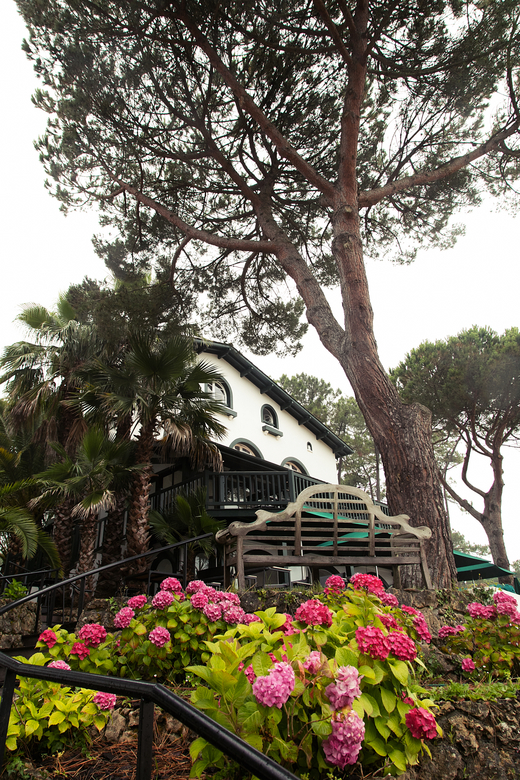 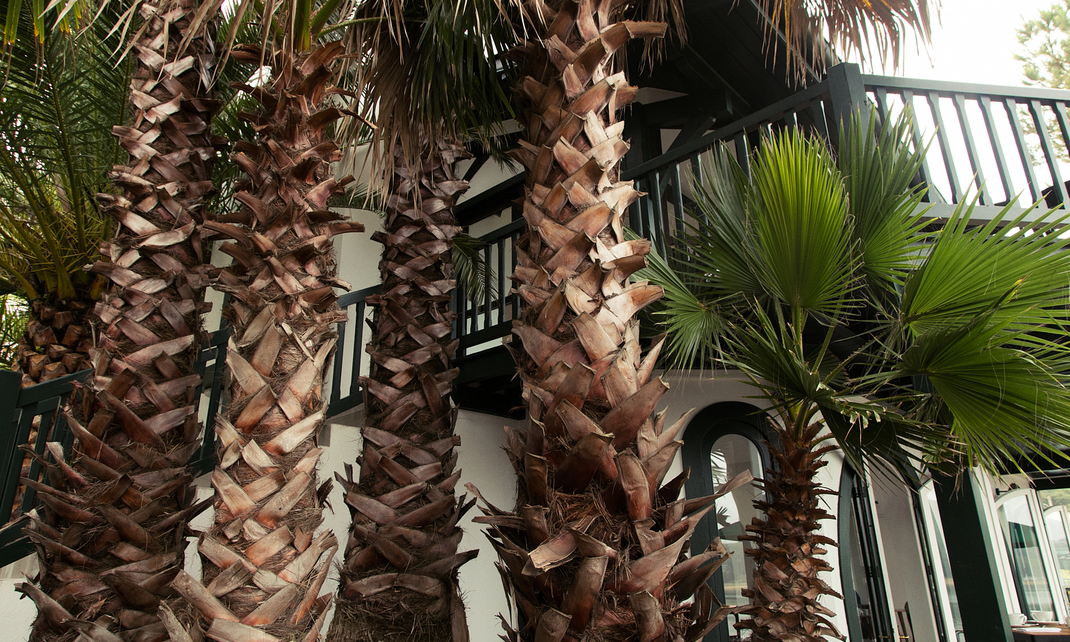 What do you do there, respectively?

Fontenille is a very small team. Together with our staff, we work across the board. We find the houses, work on the plans with local architects and design every bit of the decor alongside our decorator, Béryl Le Lasseur. Then we choose each piece of furniture, each plate, each piece of art. The music guests hear too, and right down to the gardens, which we also design! We know our hotels better than we know our own homes. We are also surrounded by extremely efficient, intelligent and caring people. Éric Frechon is the culinary “godfather” of the hotels, the Melchior Agency manages communication, and Laurent Branover supervises the whole of the operational part.

You wish to offer a “special journey, as much physical as intellectual, sensory and initiatory.” Tell us about that.

Les Domaines de Fontenille is a collection of hotels that is destined to be deployed in what we consider to be the most beautiful sites in Europe. Each time, we choose houses that are particularly representative of the region where there are located. The decoration is also in line with the specific characteristics of each place. Fontenille en Provence is furnished like a fine house from the end of the 18th century, the date of its construction. But it is obviously adapted to today’s tastes, with, for example, stoneware tiles by Patricia Urquiola in the bathrooms. The layout of the Hortensias du Lac is completely different! We are in the Landes, and it has a laid-back feel, similar to the world of the Hamptons. As you’ll have realised by now, each place develops its own style. It’s the same with our restaurants. In Minorca, the Spanish chef Albert Riera offers Spanish cuisine that has nothing in common with chef Camille Gandolfo’s coastal cuisine in Marseille. We also offer experiences linked to each of our hotels. Wine tasting courses in Fontenille, private visits to the Cité Radieuse in Marseille, or an aperitif on the cliffs of Menorca to name but a few.

How do you choose which establishments to include in your offer?

Above all, it’s a love affair with a region and with a house. We bought the fincas on Menorca during our first holiday on the island. Their incredible architecture, the wild side of the landscape, its beaches… Each one of our hotels is ultimately intimately linked to our private life. 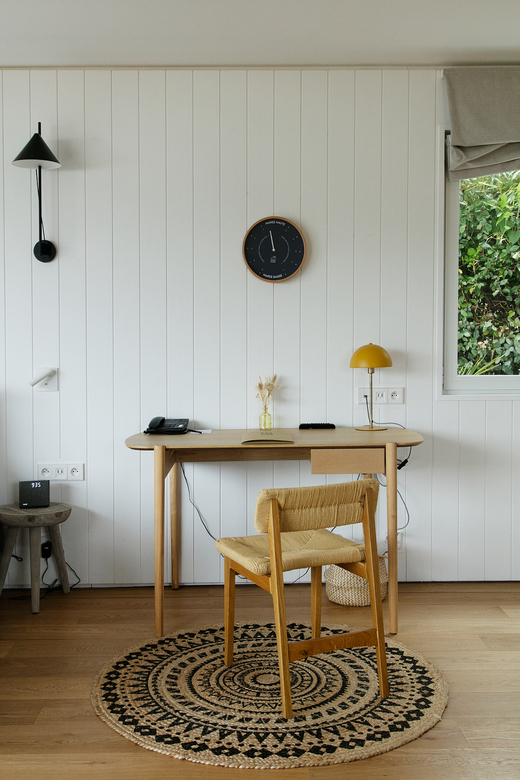 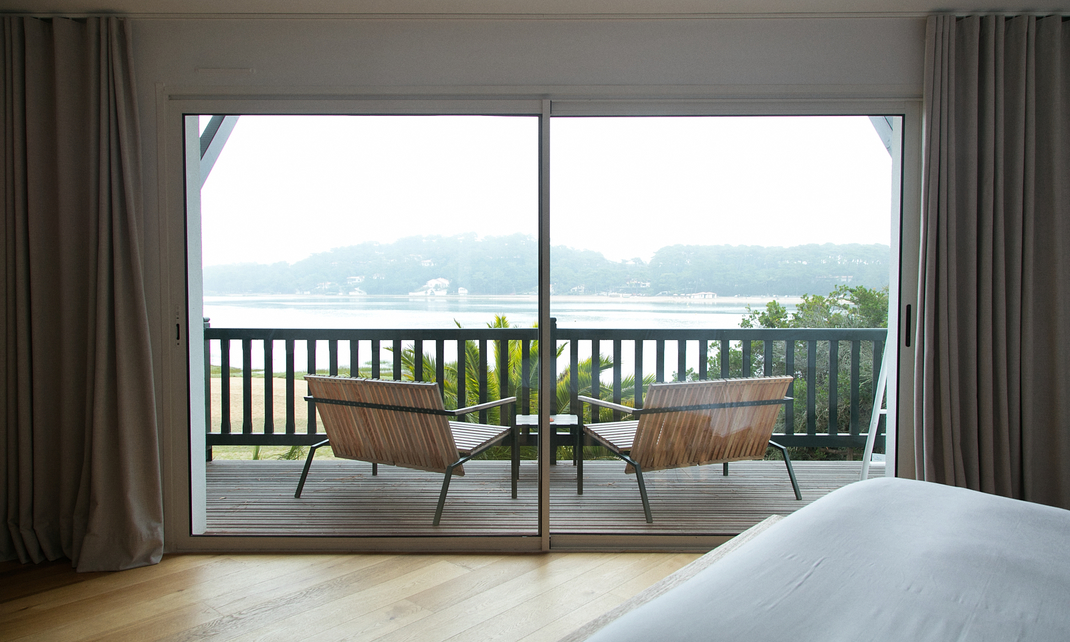 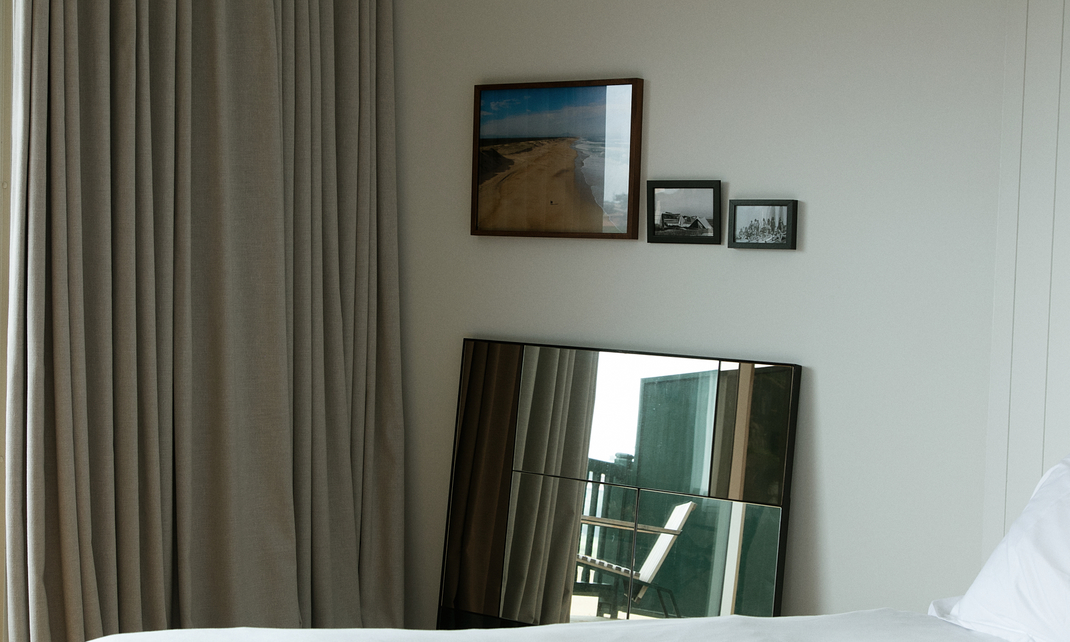 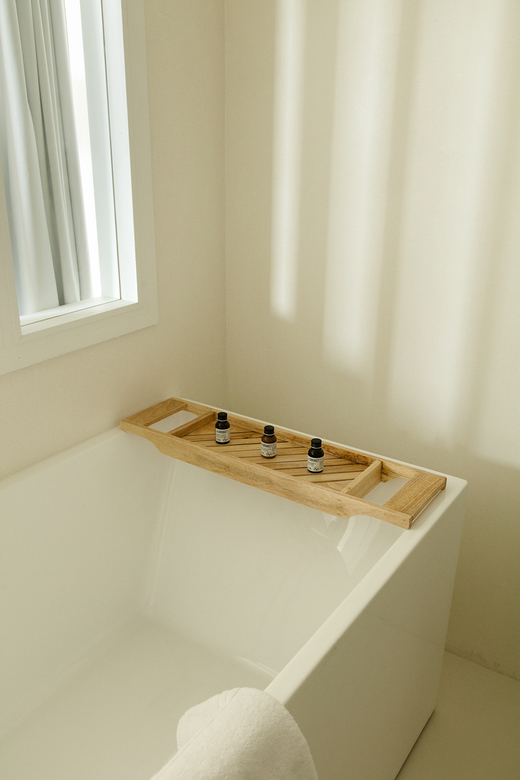 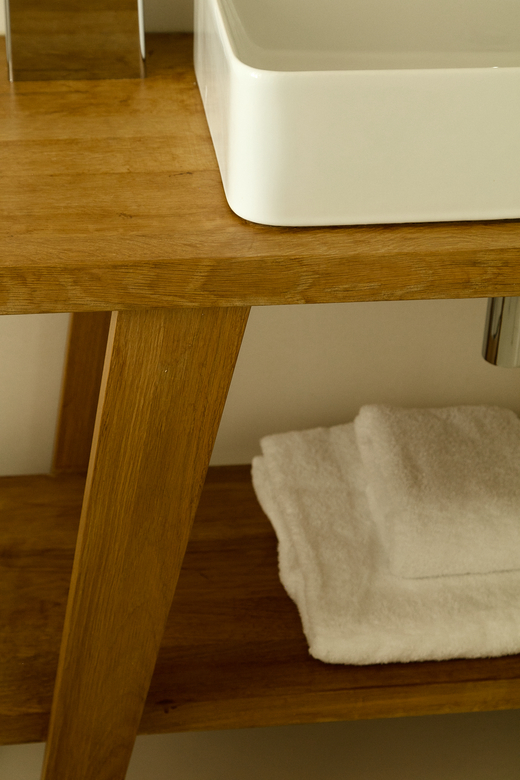 Tell us about the Hortensias du Lac. About its history, about its town!

Les Hortensias is a typical 1930’s villa built on the seawater lake of Hossegor. It was built at the same time as the town by architects who created a unique Basque-Landes style. The sporting club dates from the same period. Sheltered under pine trees, directly on the lake, a few minutes walk from the ocean: it’s an incredible place!

What metamorphoses did you undertake when you bought it?

Les Hortensias was already a hotel, which made the process easier. We’ve completely redecorated all the buildings, but above all, we have created a spa of more than 450 m2, half-underground, and a large restaurant completely open onto the lake

Who took care of the decoration? What did you want to achieve?

As with all the houses we have renovated, the decoration was carried out in-house with our architect Béryl Le Lasseur. The work was done by Patrick Arotcharen’s agency and the agency 44 avril. The idea was, on the one hand, to integrate local elements such as armchairs from the Chaiserie Landaise and fabrics from Artiga, but, on the other, to put surfing and board sports back in the heart of the hotel. Surfboards arranged on racks are available for hire from the reception desk. 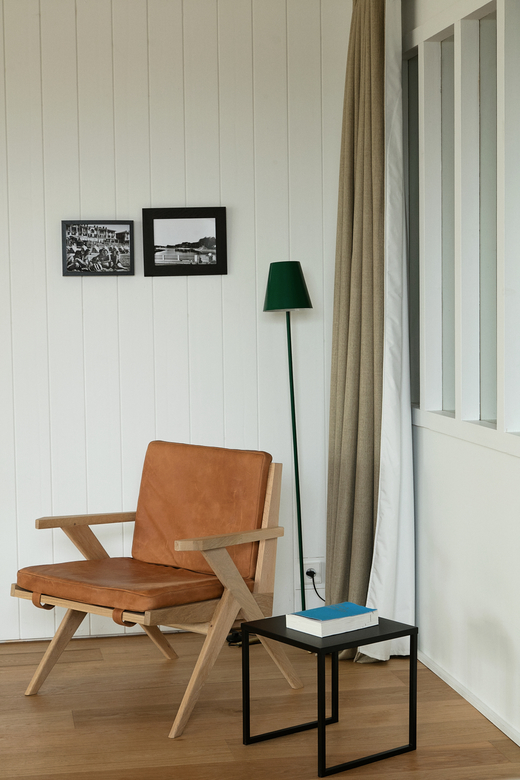 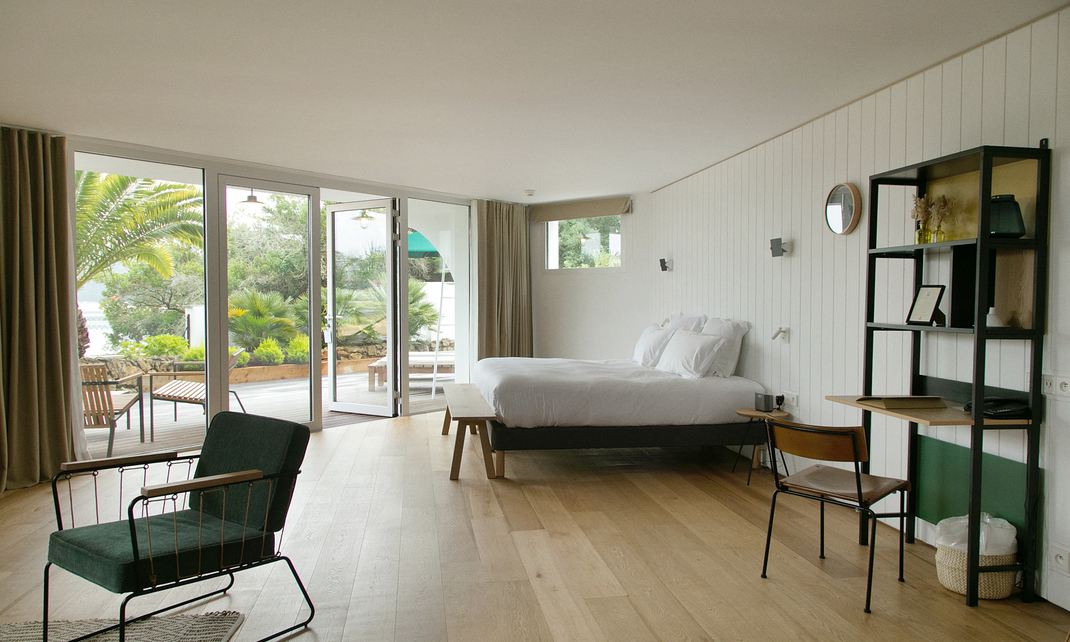 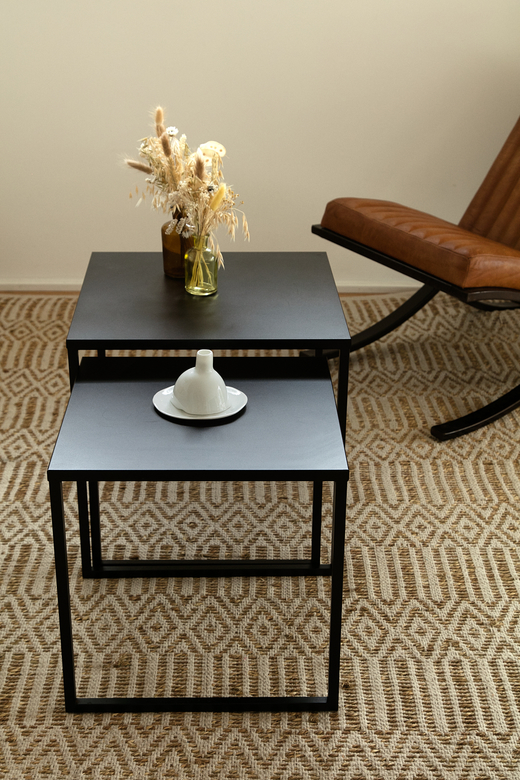 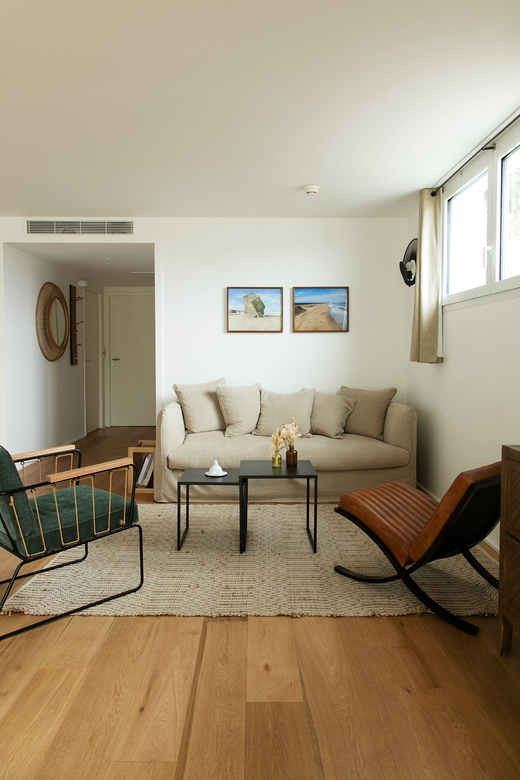 A huge spa, a restaurant whose chef – Philippe Moreno – worked with Gerald Passédat: what kind of experience would you like to offer to the guests of the Hortensias du Lac?

We want to offer a pleasurable experience in a chic, yet relaxed environment. In the morning you go surfing or paddling on the ocean waves, in the afternoon you relax at the pool overlooking the marine lake, and then you go for a massage or rest in a Nordic tub. And in the evening you will enjoy the extraordinary cuisine offered by Philippe Moreno, based on regional produce and typical recipes of the region but reinterpreted with great talent, subtlety and generosity.

Speaking of food, what kind will we find on our plates here?

In an area where nature reigns supreme, how do you commit yourself to conservation in your everyday life as hoteliers?

We take great care to follow an eco–responsible policy both in the construction of our hotels and in their operation. Water and electricity savings, zero plastic, organic and recyclable materials… and as soon as we can, as we have in Fontenille and Minorca, an organic kitchen garden, grown using permaculture techniques to supply our restaurants with vegetables.

Where are we likely to meet up with you in the coming months?

Maybe here in Italy – which is where I’m being interviewed- or travelling through a region of Portugal to discover another spot to fire our imaginations! 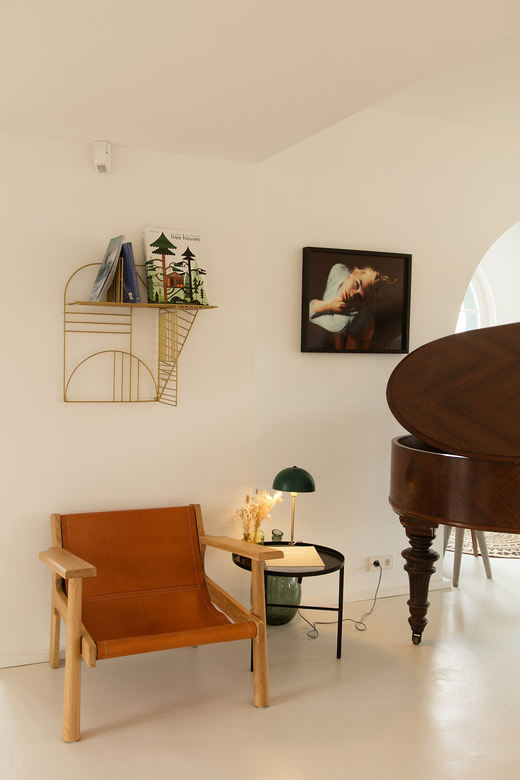 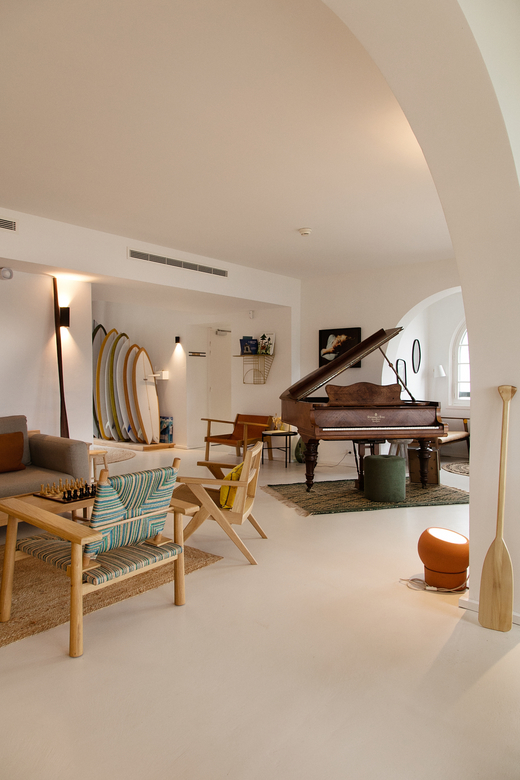 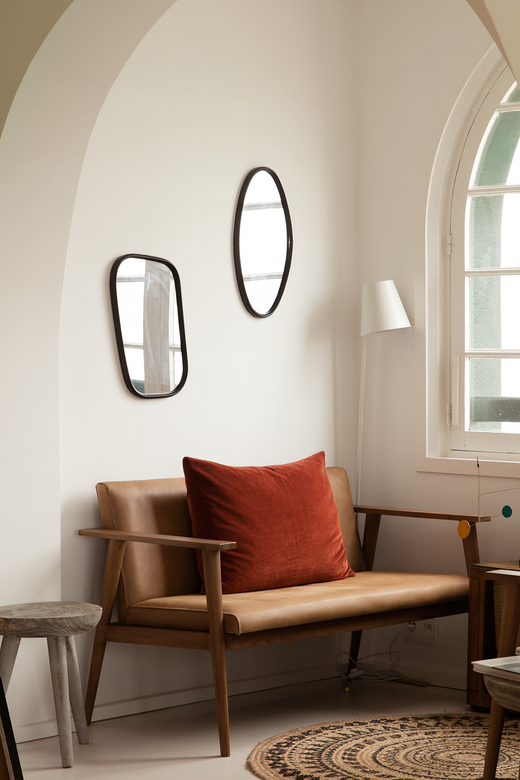 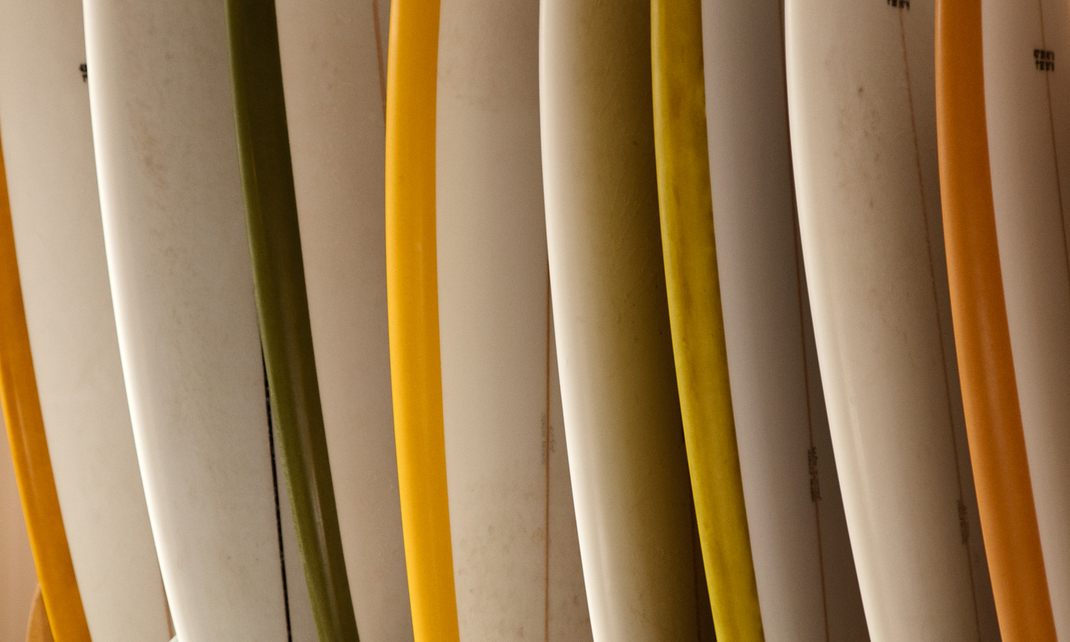 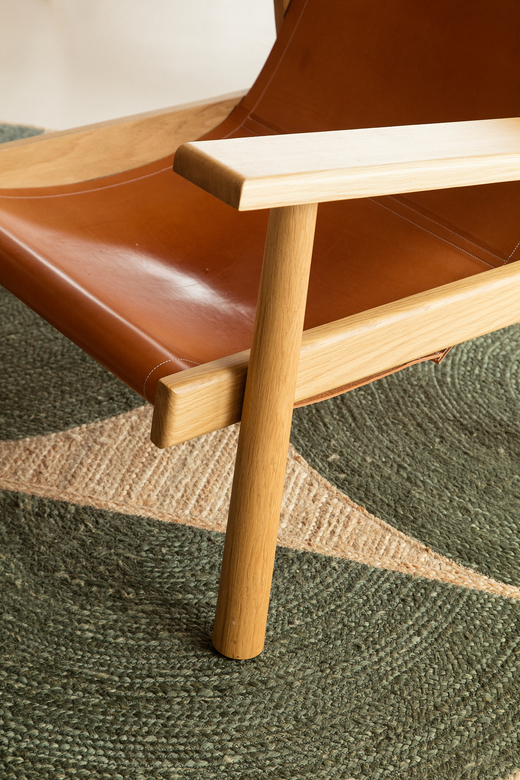 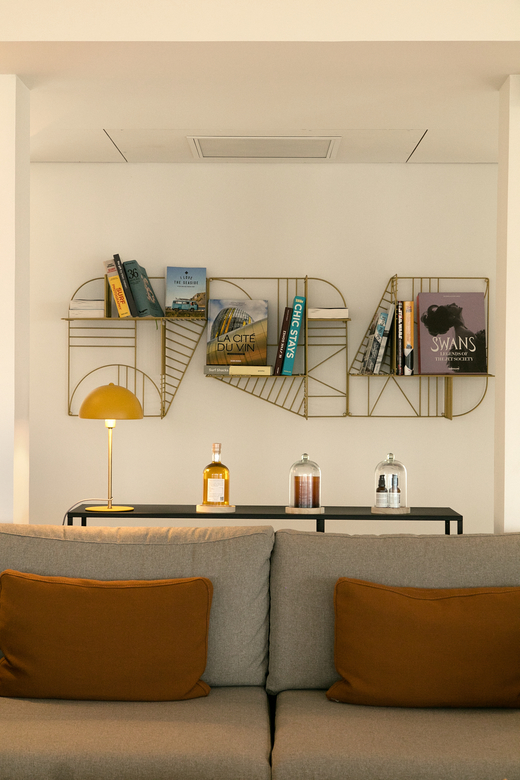 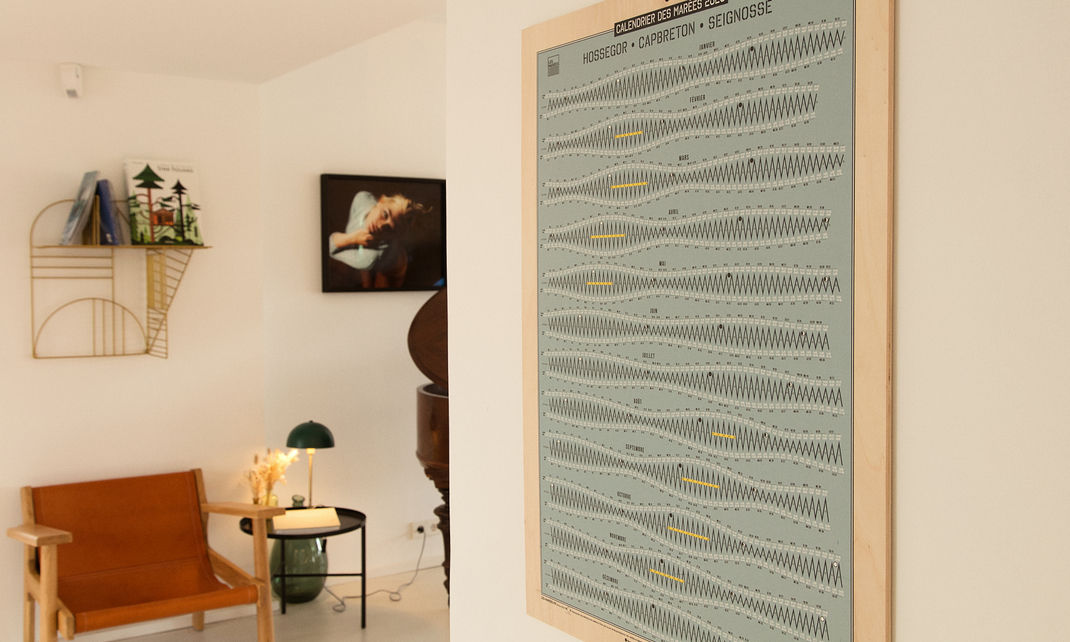 The idea was, on the one hand, to integrate local elements such as armchairs from the Chaiserie Landaise and fabrics from Artiga, but, on the other, to put surfing and board sports back in the heart of the hotel. 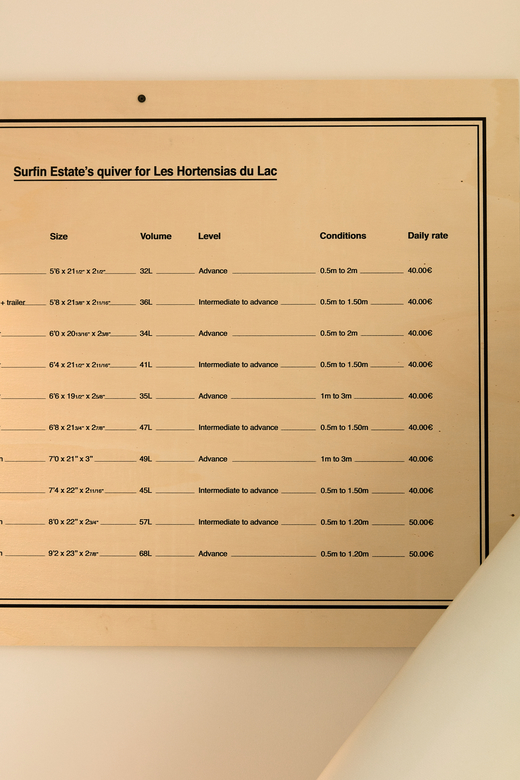 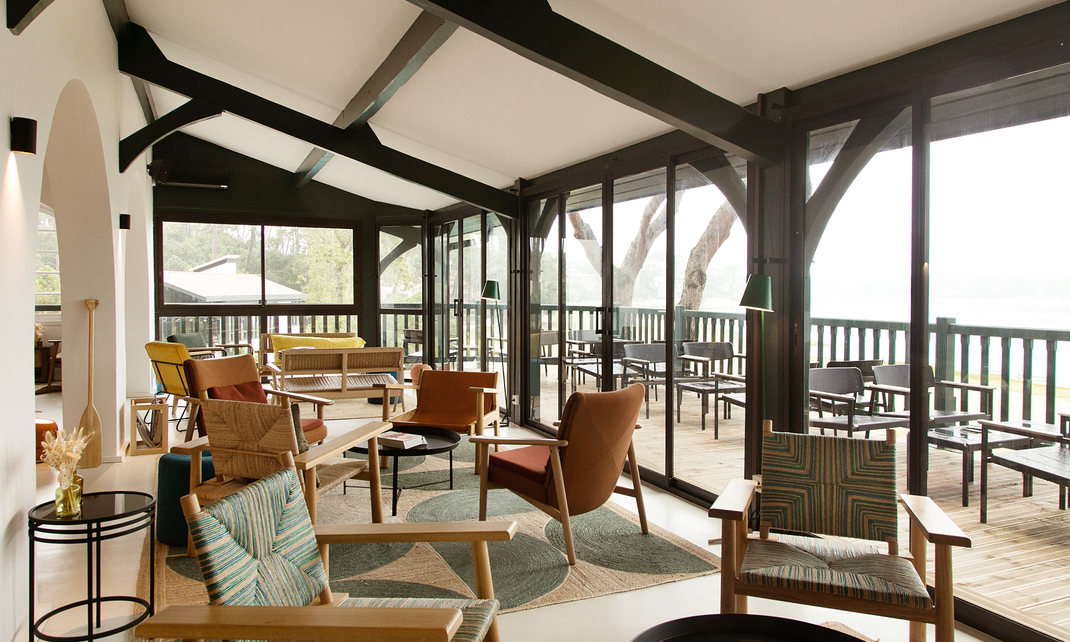 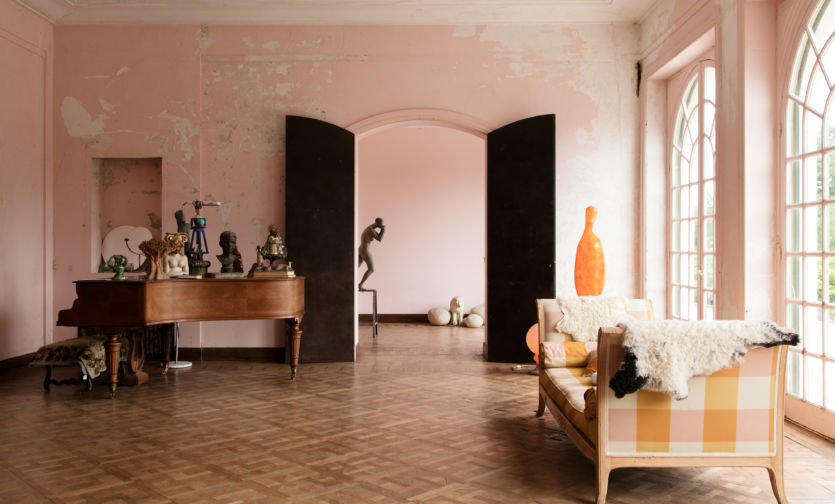 Villa Magnan, The Enchanted
Awakening of a Sleeping Beauty

“It was a bit like a blank slate, or a pink slate, more like, because of the walls,” confesses Anne Israël, evoking...

Home Good Home, a Committed Back to...

On the occasion of Paris Design Week and as part of the “Home Good Home” event, The Socialite Family and Le BHV Marais are teaming up to...

It’s a go-to address for foodies who love quality produce sold in a shop that harks back to our childhoods. A warm welcome only 20 m...