Michel Vivien’s eyes are on fire. Hungering for images, consuming everything. This extreme sensitivity is a double-edged sword. Both a blessing and a curse. An obsession with all things beautiful and ugly, from an early age. Beauty, in particular the beauty of women, which he’ll follow throughout his life. From Annecy to Paris to start an adventure, aged 18. From shoe design studios to shoe workshops. From creating his own label in 1998 – after having sketched models tirelessly for large fashion houses – to opening his first boutique. All this for those women, who often swear by him! Their shoes. He welcomes us one morning in his flat in the 3rd district of Paris, among his drawings and multiple paintings. His “workshop floor” he smiles, showing an insatiable appetite for this art which he makes frequently on all kinds of surfaces. His afternoons are all dedicated to this, but his mornings are dedicated to shoes. And for that, he heads to his Fief. An old blacksmith’s workshop, like a castle in the sky where birdsong abounds. This is where Michel Vivien gets his inspiration. The same way he has since the beginning. With drawing and work and how he carries it out. “A duty” which in his own words “commands him.” Taking himself to task for women, based on three obsessions: quality, comfort and elegance. This is what makes his rather enchanting career path stand out, you can’t but compare it to the world that he enjoys creating, from plans to choosing furniture, in true self-taught style. Places with a friendly atmosphere where each object has a close relationship, a history. For his new boutique at 70 rue Faubourg Saint-Honoré (75008 – Paris), just as he did in his home or in his green enclave where he has “felt at home for a very long time,” this style master, infatuated with freedom has successively assumed the roles of architect, builder and decorator. A creative process which he plunges into with joy, ready to explore anew each and time. 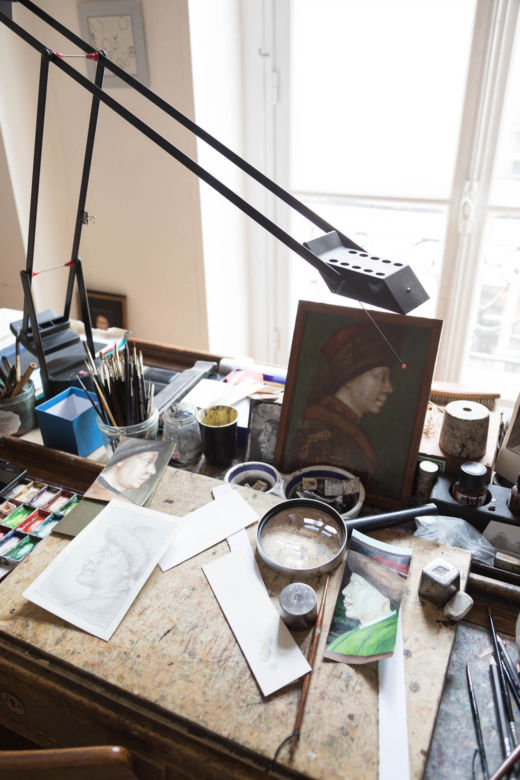 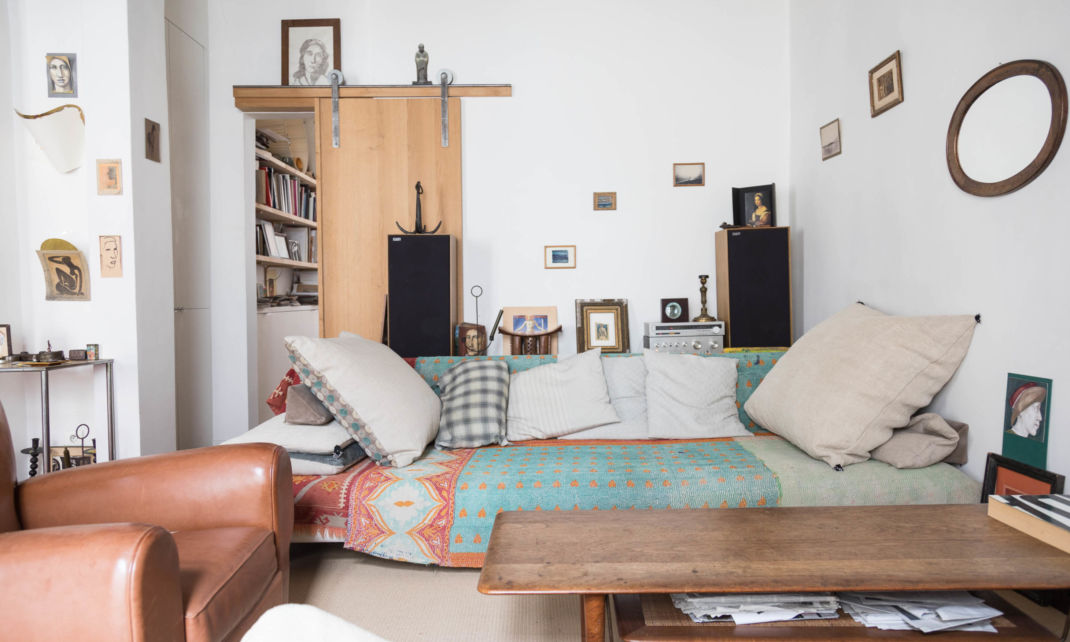 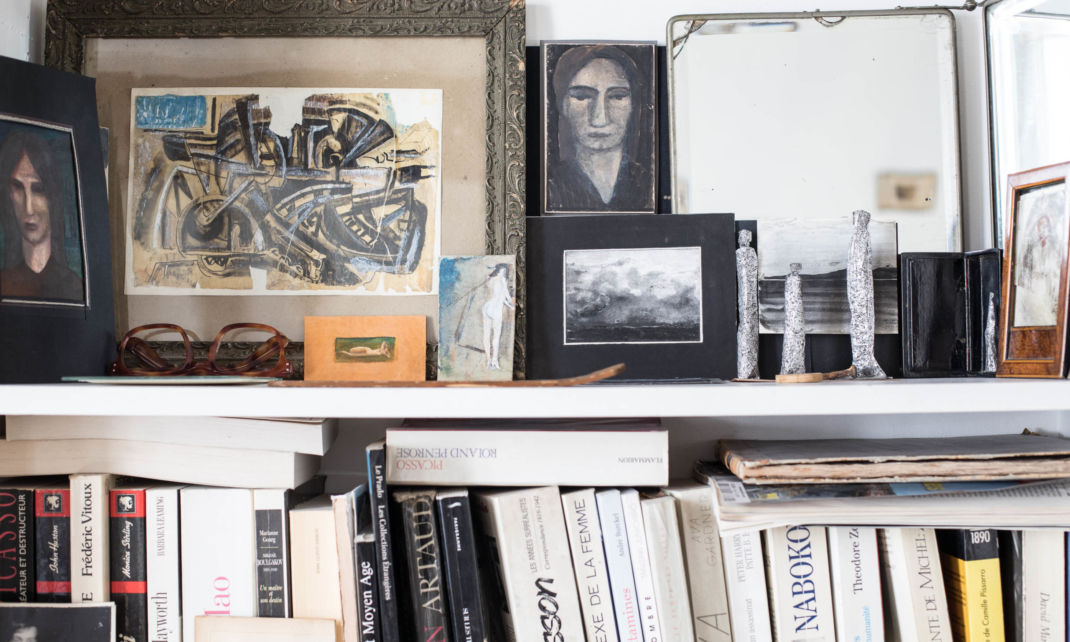 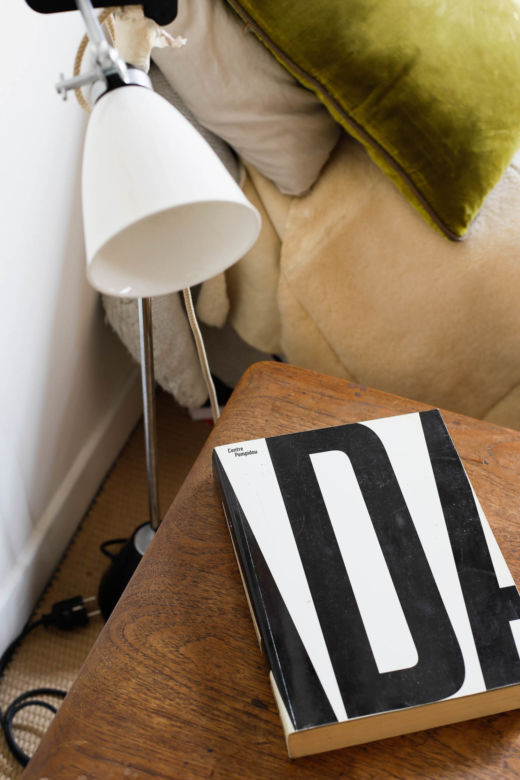 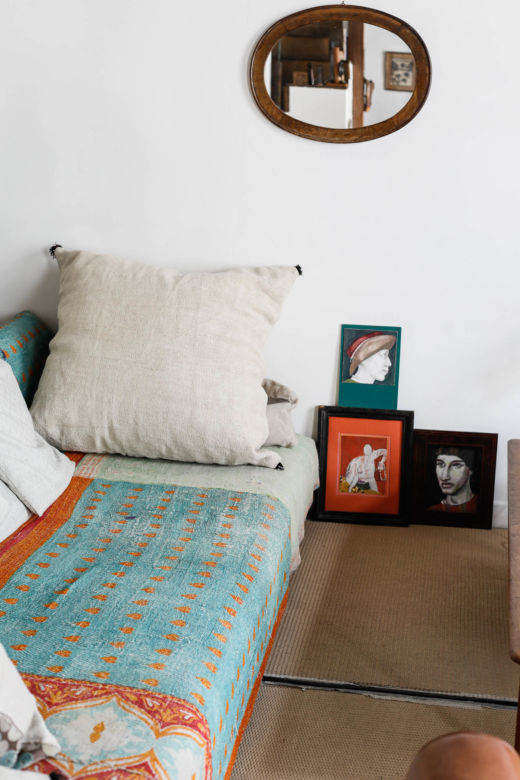 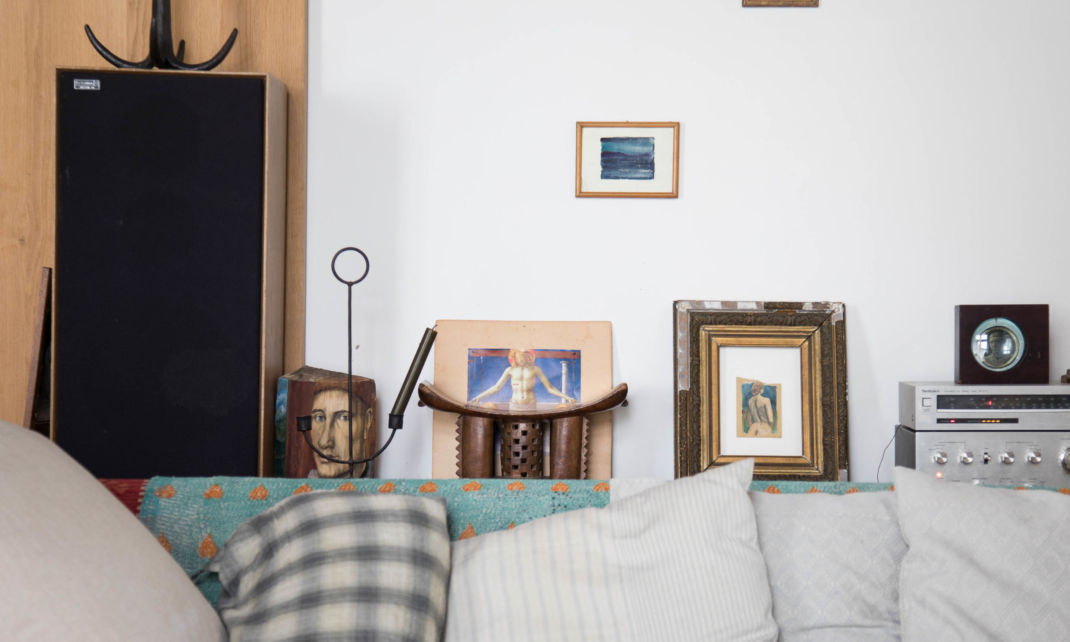 Michel, could you introduce yourself, please?

My name is Michel Vivien, and I am a designer and creator of French shoes.

Tell us about your education in “beauty”. How did your taste develop?

I learned entirely on my own. I have plenty of free time, and I don’t seek  entertainment (no screen time), so I work, read and walk. My eyes devour everything. Colours sing to me, lines disturb me. I paint, I sculpt, I am an artisan who works with women’s feet. This is the ideal situation for me, nurturing.

When did you decide to dedicate your life to women?

My admiration comes from childhood. An “obsession”. A heady cocktail created from beauty and desire.

Why through shoes in particular?

Pure chance, and an Italian friend. I was painting, and I needed some paid work. This intricate craft captivated me: drawings, sculpture in the forms and the heels, and the feel of the skins and the colours. It was inspirational. The technical aspect, the engineering, the exercise of the forces and the search for balance. Excellent. 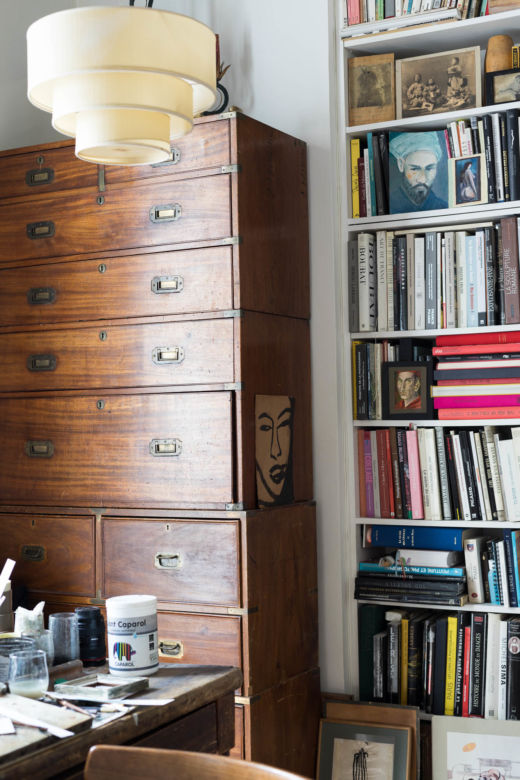 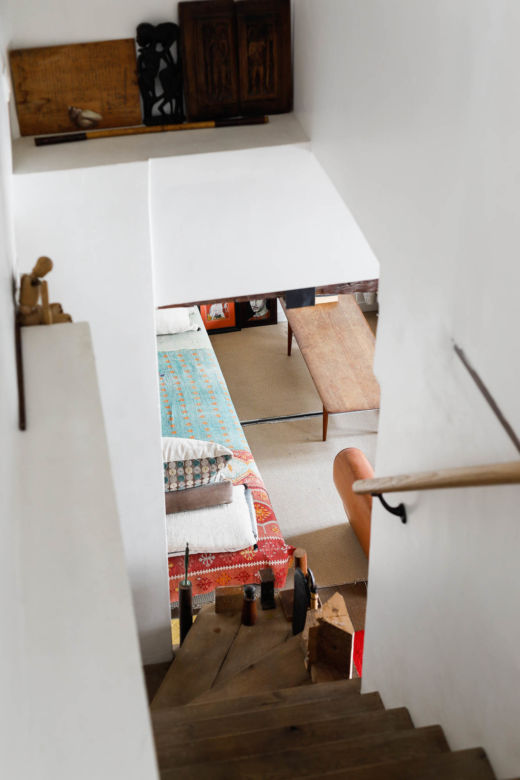 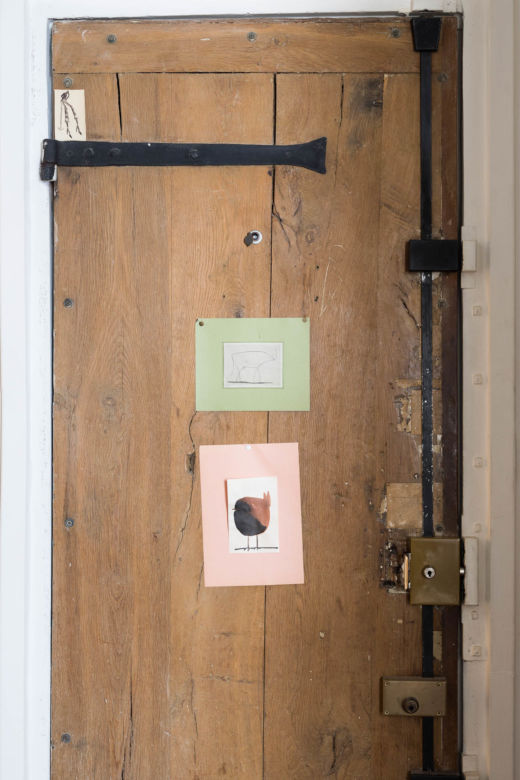 Art is my secret garden. It is the way I calm my strong temperament! 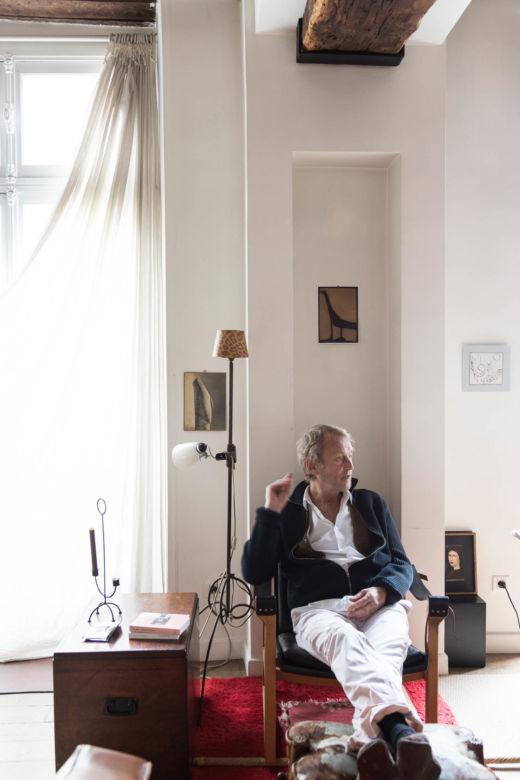 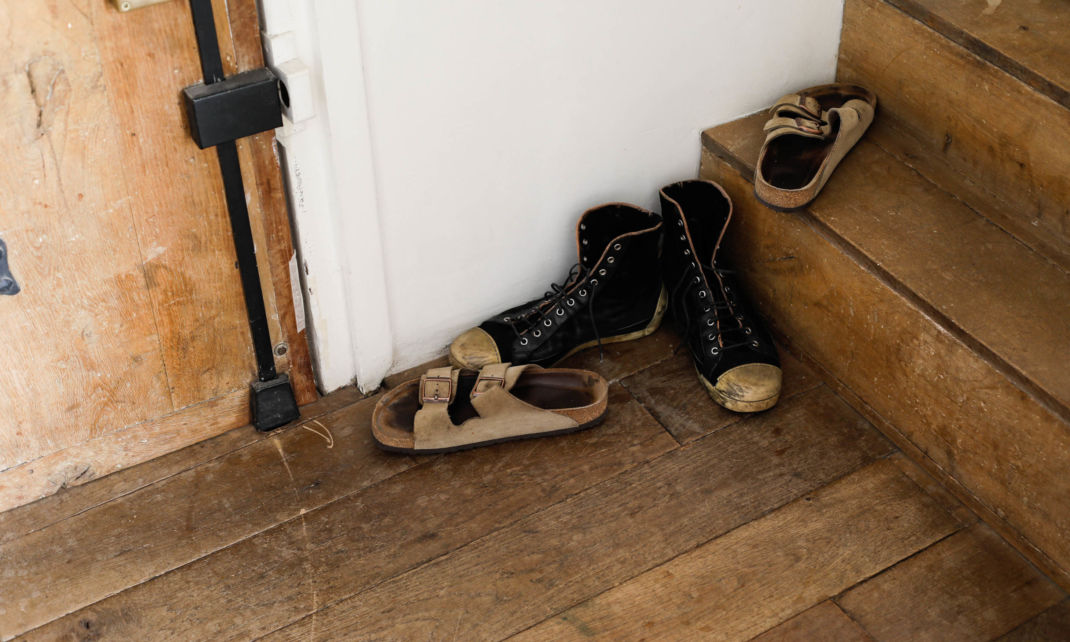 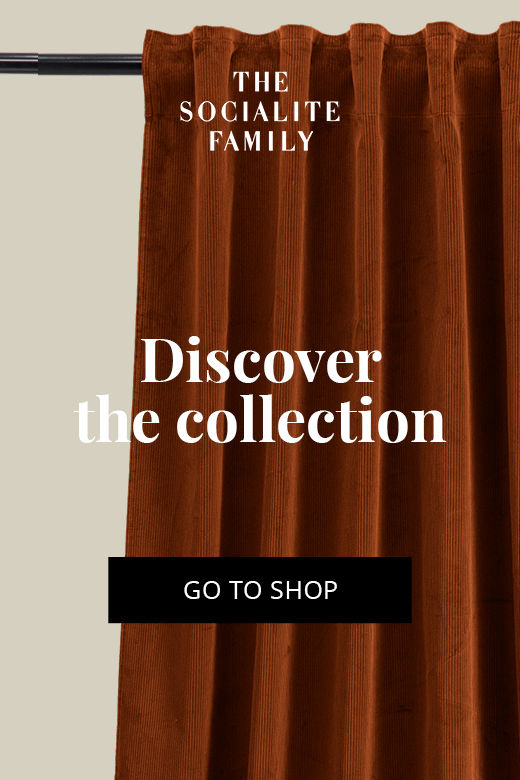 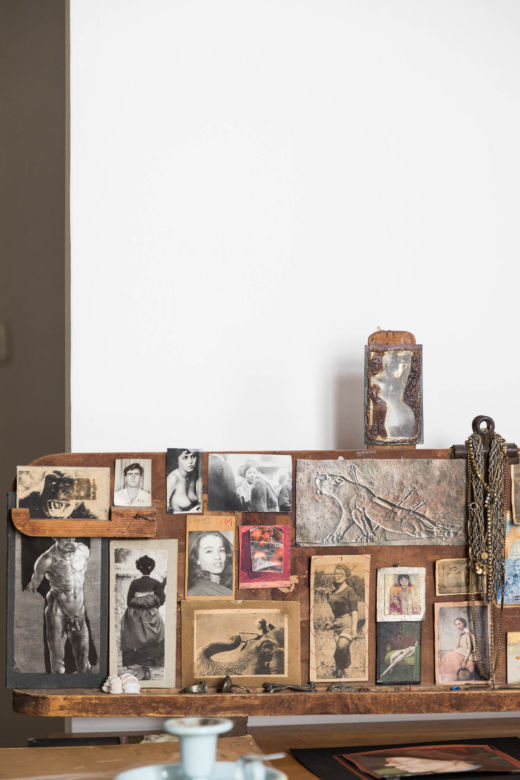 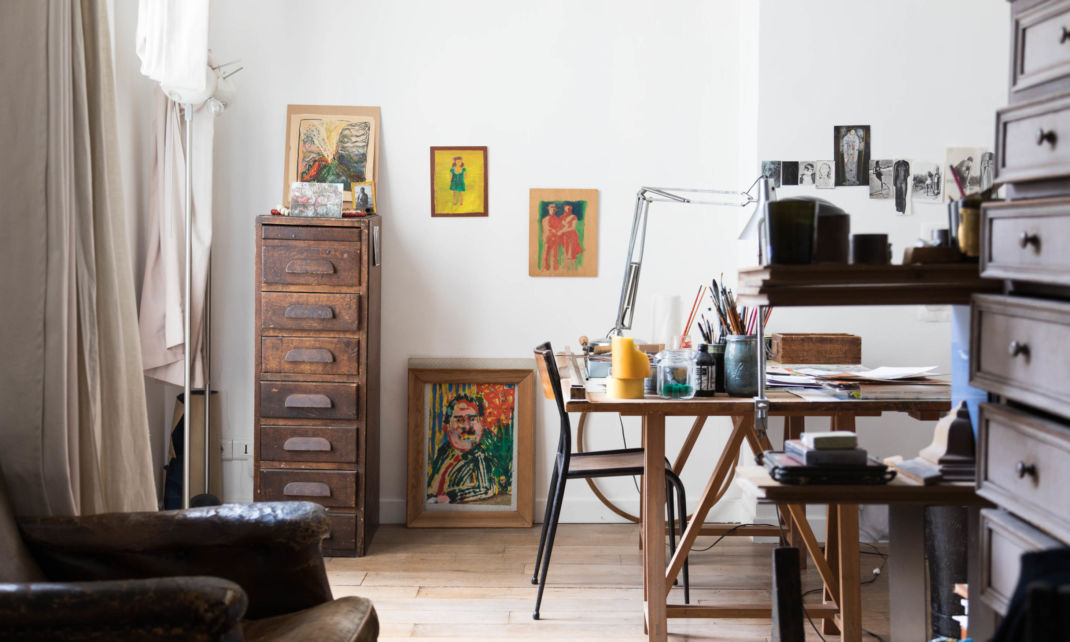 What do your first and your last model have in common?

Seriousness, the design and mastery of a particular type of footwear. Unfettered beauty for a hectic life.

Tell us about your shoes’ origins, from the first drawing through to manufacture.

My wonderful profession of drawing, a strict selection process and transposition of the shape onto my model. Total control. Then, it’s a trip to Italy where the prototype will be made into a pattern, cut out, stitched and mounted, followed by a fitting in Paris on our model. And corrections are made if necessary.

You worked with the greatest before establishing your own brand. What did these various collaborations bring you?

I am extremely technical. Collaborations can turn into achievements. Putting on a show both scares me and pleases me. Risk is good! I love to be of service because I move away from my own thinking. I disguise myself. Some of these collaborations have brought me joy and pride.

Art is inseparable from your personality. Do its trends and its masters inspire you on a daily basis?

A life without a screen but full of images. I have to move around to collect them, I walk, I paint, I read. I like to learn alone, it takes time but I think it’s good that way. I progress, I discover, I reclassify and then declassify. My ideas are well-framed, clearly understood, but nothing is fixed. Art is my secret garden. It is the way I calm my strong temperament. 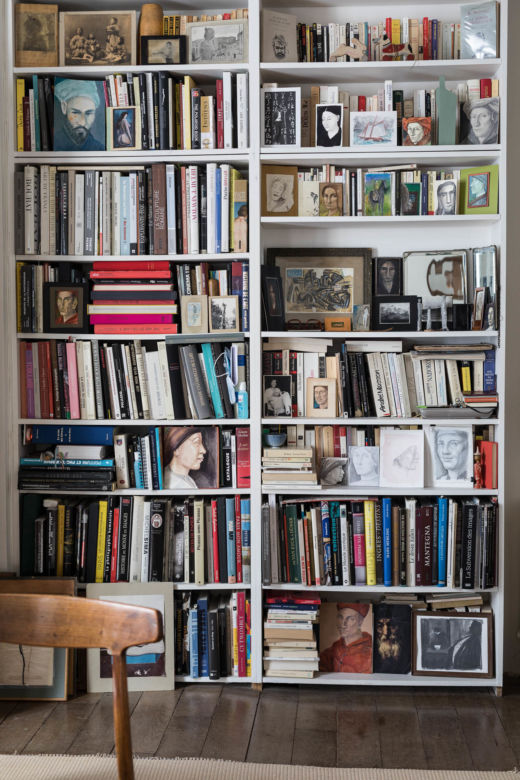 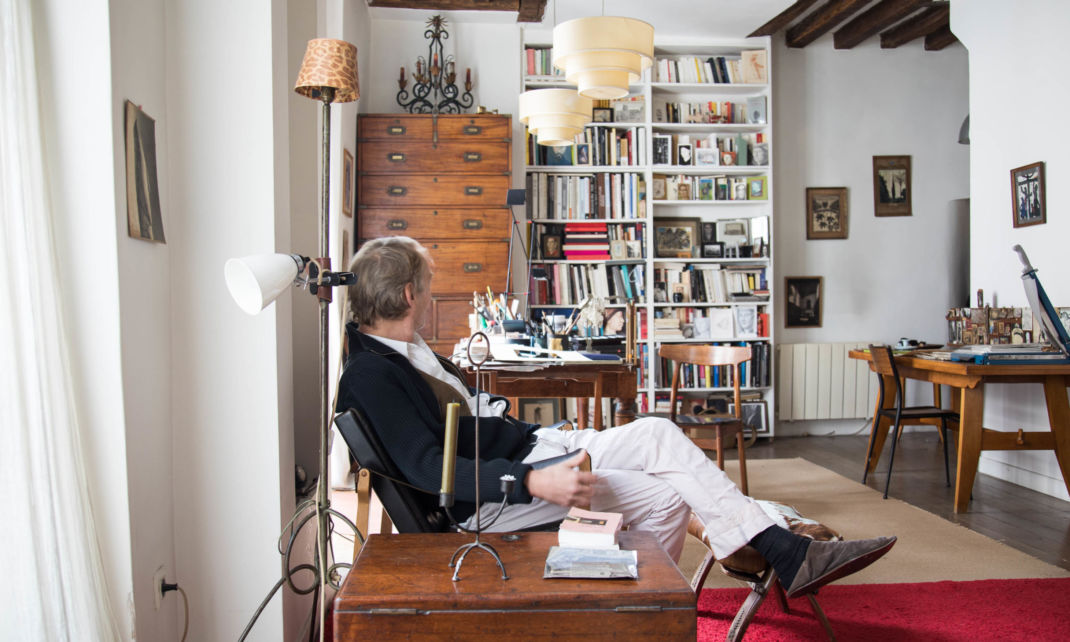 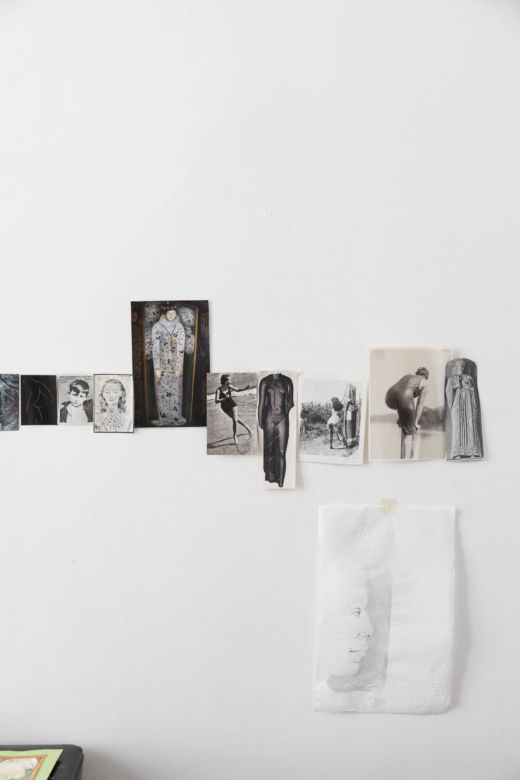 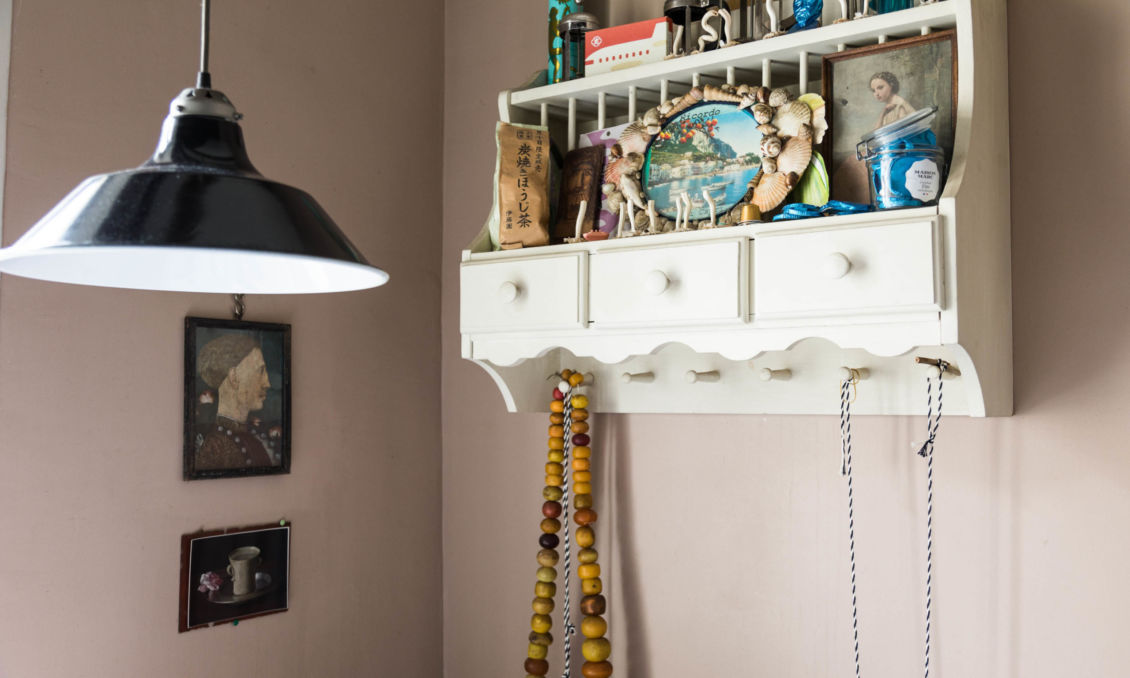 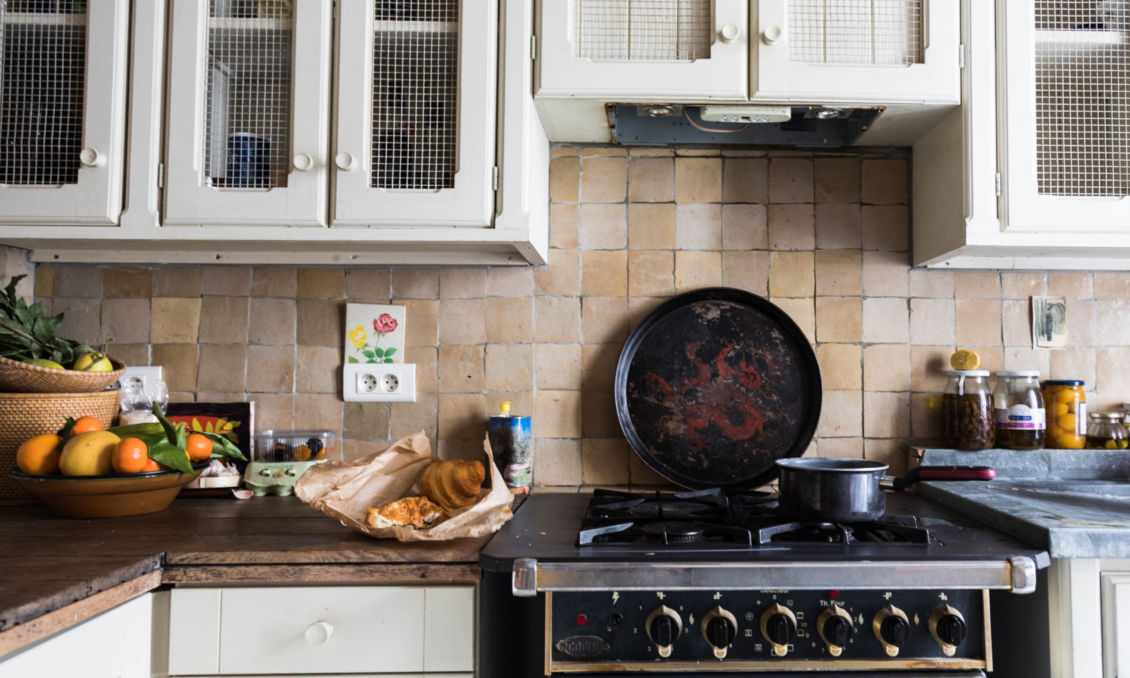 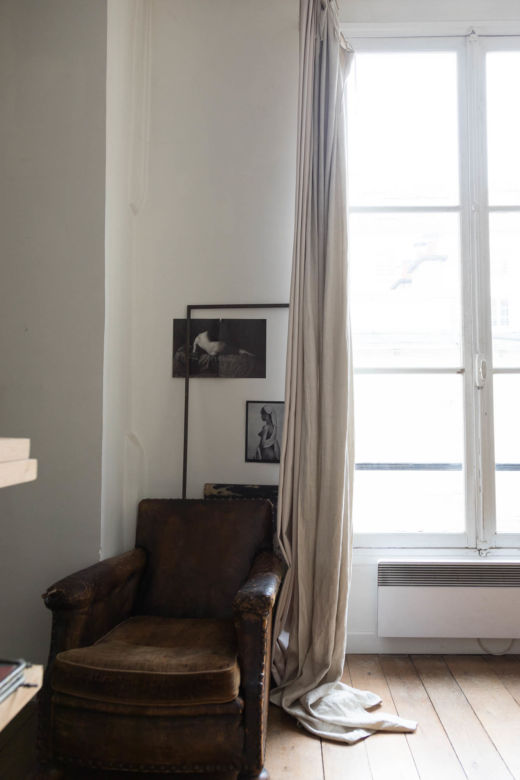 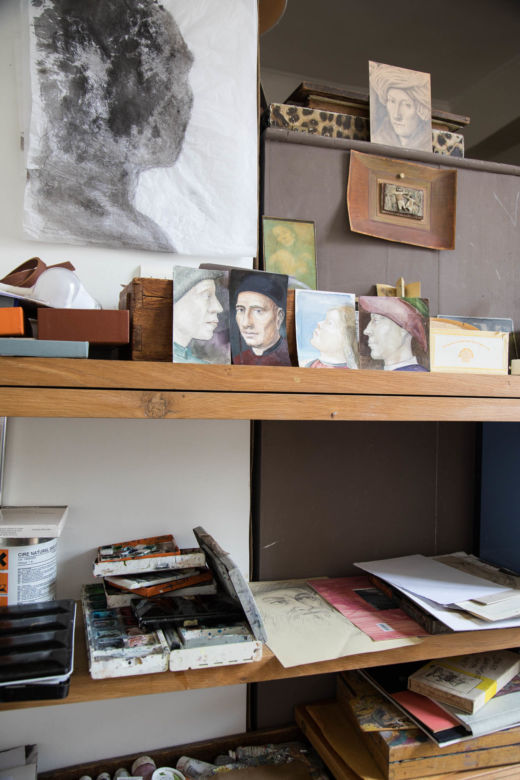 In which period of history would you like to have lived?

Our era has some flaws. The heavy, ugly and noisy intervention of humankind, all over the planet. It’s all commodities and market forces. And I deplore it. I weep for the meadows that have been built over, recent constructions full of angles, of nothing but ugliness. We live in a free paradise with many plagues. It’s a shame! Leonardo da Vinci’s 500th anniversary took me to the workshop where he was apprenticed to Verrocchio in Florence. The master was a draughtsman, therefore a painter, therefore a sculptor, therefore an architect and decorator, a foundryman, a jeweller, an engineer, and had an affinity with much more. My curiosity and thirst for knowledge would have known no bounds. I love challenges, exploration, connections. This era is stupidly specialised.

In addition to this flat, you also live in a former blacksmith’s workshop in the 11th arrondissement which has been entirely renovated by you. What does it say about you?

This place is a godsend. Vast, high, flooded with light. I have been living it for a very long time. The architectural work, the decoration and the furniture, I designed them, decided on them. For the shelves and wooden flooring in my office, I bought logs and cut them with the help of a wonderful journeyman cabinetmaker. I want to show off. Strength and simplicity, reflective finishes. I hate varnishes and the majority of today’s paints. These synthetic products seem to me to be derived from plastic. I worked on the bones of this place, sanded this huge wooden floor in my own way. I used to be a builder, and I play at being an architect.

What furniture and objects can be found there?

This space becomes a showroom for four sales events. I’ve decorated it with a table showing off some odds and ends I’ve found. There are also drawings and paintings that I have done.

What do you need to feel good?

My living space! I’m very fortunate. I have a beautiful apartment that I also use for painting  and these sunny offices set in an oasis of greenery. Nature, which is essential for the eye, the rustling of the tall trees and birdsong as the background soundtrack.

Where will we meet you this year?

2021 will see the opening of my shop in the 8th arrondissement, at 70 Rue du Faubourg Saint-Honoré. I used my usual process for this place. Drawing, drawing  and, for the installation, I called upon the architect Sophie Dries. And then we launched our e-shop on 12 January last! 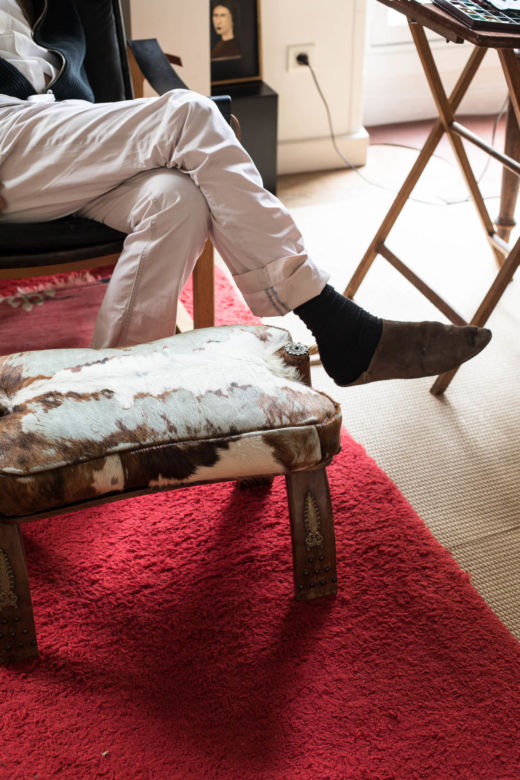 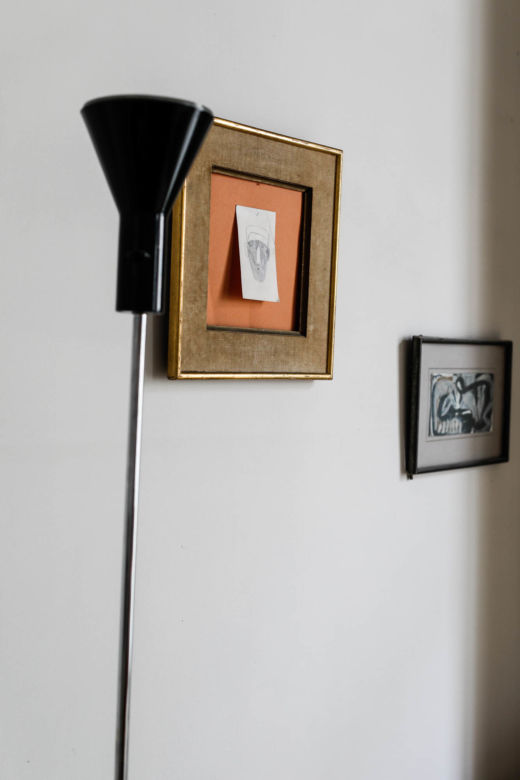 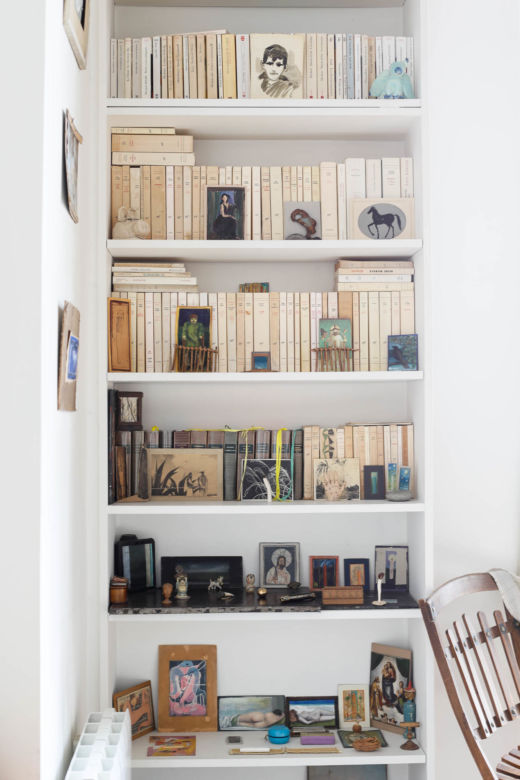 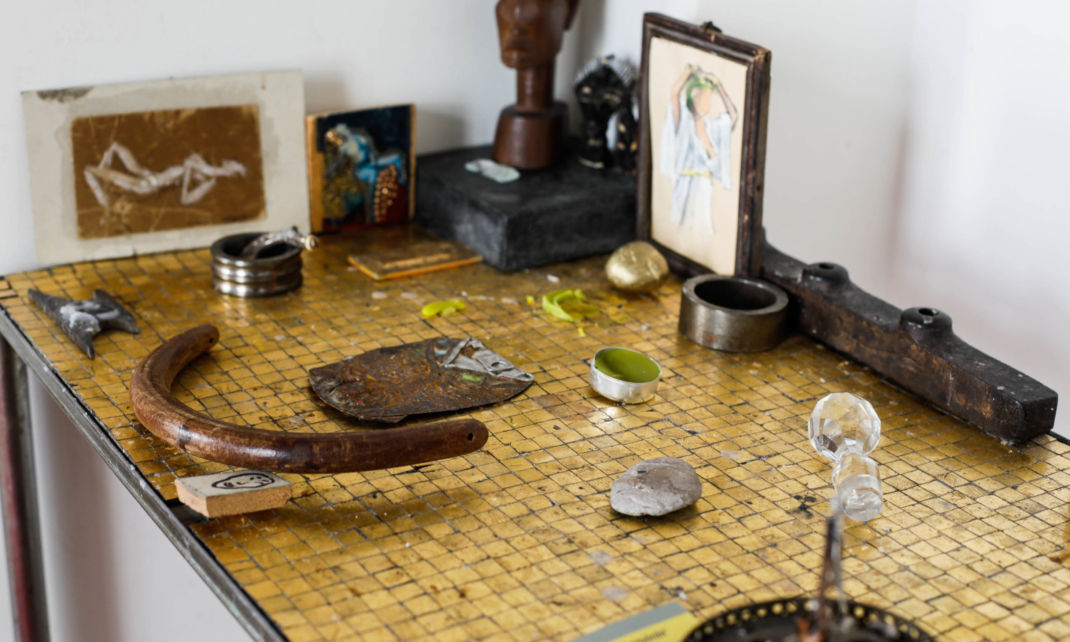 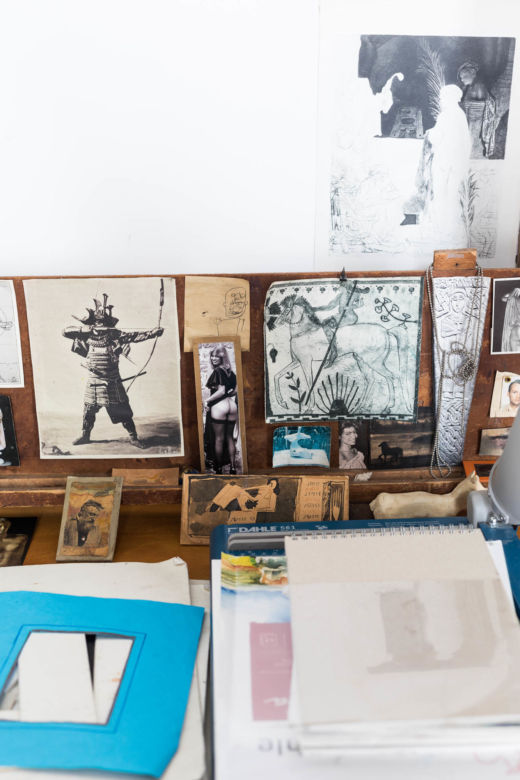 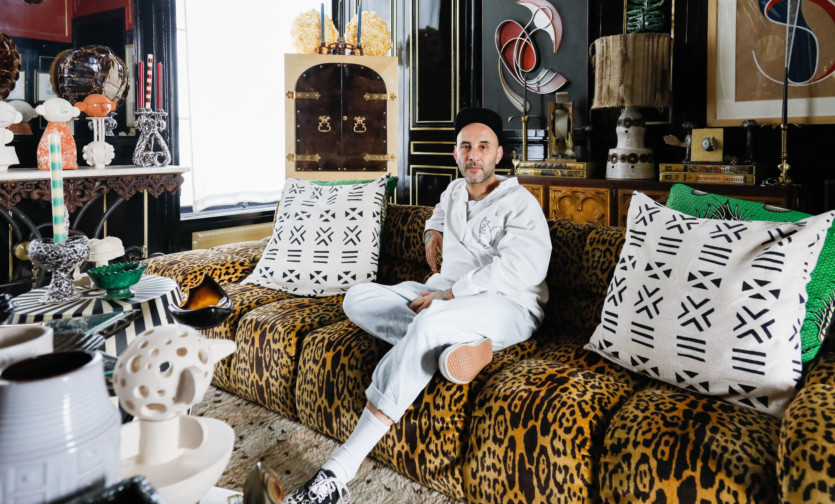 Corrado de Biase, Never Be Afraid
To Try Something New

Discovering Corrado de Biase’s apartment design is like plunging into a book. The book of his life. An avid reader –...

Bertrand Waldbillig, from Journalism to...

Having scoured the world of vintage car rallies and race meetings for stories, Bertrand Waldbillig found a new passion in life. Interior...

Behind the Scenes of...

What a pleasure to show you behind the scenes of Sotheby’s’ sale, NOW!. There, we were able to see a procession of art experts in the...