A stroll through the cellars of Rare Champagne
with Régis Camus

The story of Maison Rare Champagne, which has just become independent from Piper-Heidsieck, is utterly fascinating. It has developed and refined its own identity since the appearance of its very first Vintage, which came about from an epic battle with nature in the heatwave of 1976. This battle created the Rare Champagne label. The Vintage has only appeared nine times since then. In each of these nine years, the elements unleashed their worst — and despite this, inspired the thirst for battle of the label’s skilful Head of Cellars, Régis Camus. Indeed, The Socialite Family had the chance to meet with him in the cellars of the “Maison” in Reims. As the man who is responsible for Rare Champagne‘s signature style, he has imbued this ultra-luxurious elixir with his taste for the extraordinary. With a record of turning things on their head, he transforms calamitous events into wines with a unique, yet consistently exceptional flavour. Régis Camus has been taming the weather for 25 years. He does some of his work outdoors, but above all, he is responsible for ensuring that each nectar has everything it needs to achieve maturity. This takes a minimum of eight or nine years, which are essential before the perilous process of stirring the wine can take place, and we were invited to watch, wide-eyed, as he worked his magic. A few minutes later it was time to taste the results, and it was our bubble over with excitement when faced with the precious bottle that adds the finishing touch to the exceptional Rare Champagne experience. The bottle features asymmetrical shoulders, reflecting the long tradition of mouth-blown bottles, adding a sublime touch of luxury to the label’s collaboration with some of the world’s finest jewellers. Rare: there truly is no better word to describe this fine Champagne. 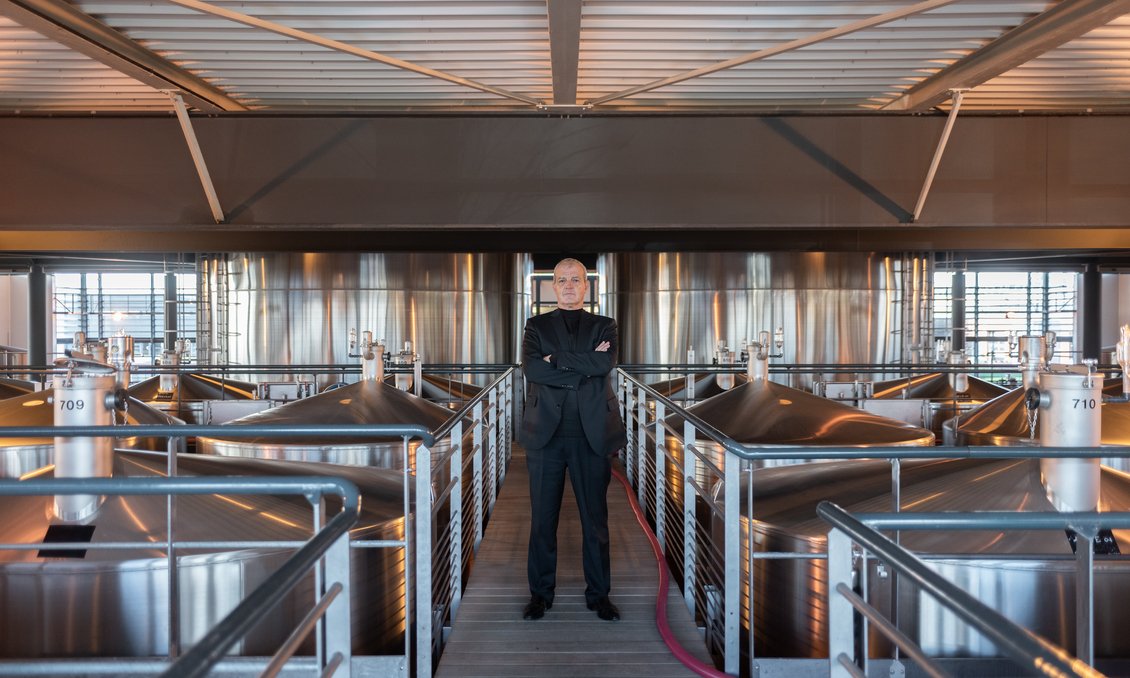 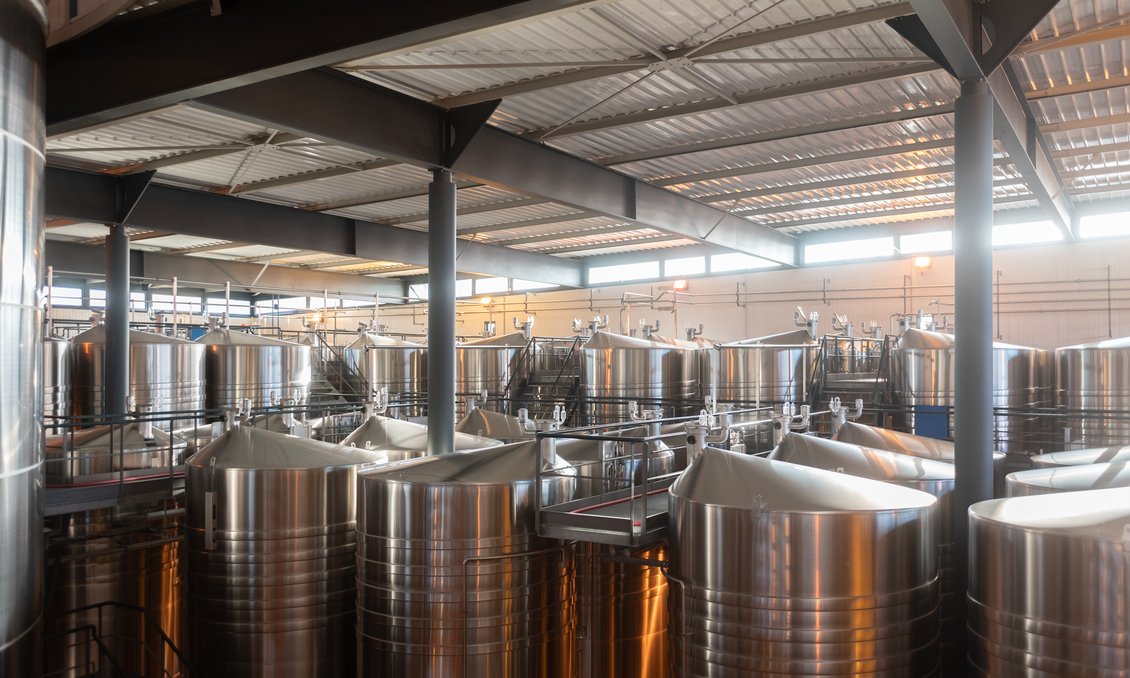 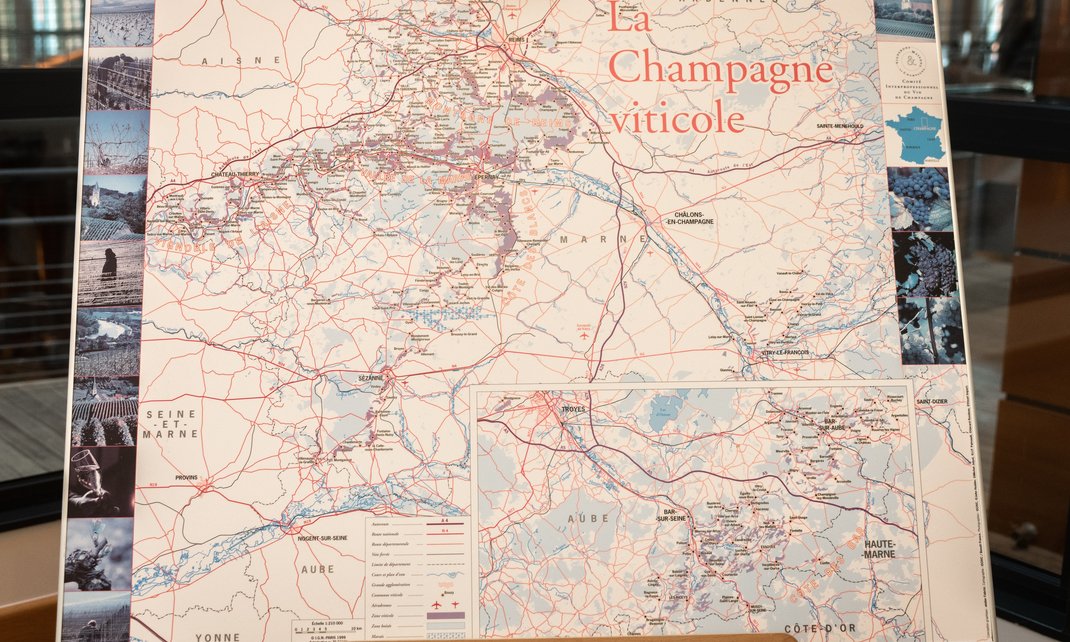 Régis, can you tell us who you are? Would you like to tell us about yourself?

I am Head of Cellars at Rare Champagne. I am a trained oenologist and it’s my job to guarantee the style of the brand.

Can you tell us about your job? How and when did you join Maison Piper-Heidsieck?

I joined Piper-Heidsieck at precisely 7.44 a.m. on 17 January 1994. I will soon have been there for a quarter of a century! As Head of Cellars, my job is first and foremost to be passionate about wine, as well as nature, and what it has to offer us; how everything is organised depending on the weather, which can sometimes be very changeable in its moods. It’s a passion for creating wines that will grow better with age. Talking about these wines is also a real pleasure. You need to be able to engage with connoisseurs and enthusiasts on the one hand, and with beginners on the other. It really does make me happy.

How is a day at Rare Champagne organised?

My day always starts by saying good morning to the staff. It’s extremely important to me, because everything depends on the personal aspects. We are a team and we do everything together. After that, I move on to administrative duties until around 10 a.m., when it’s time to start testing. It’s an essential part of the role. During the afternoon, we focus on meeting with wine growers — or journalists if there are no meetings scheduled! 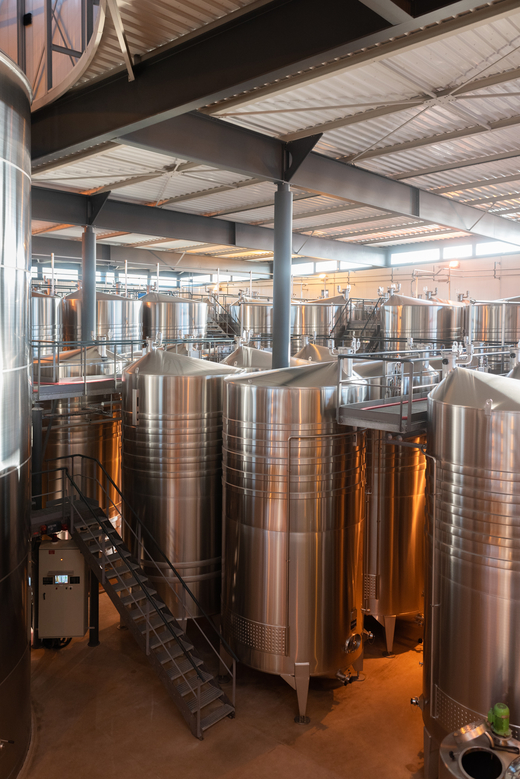 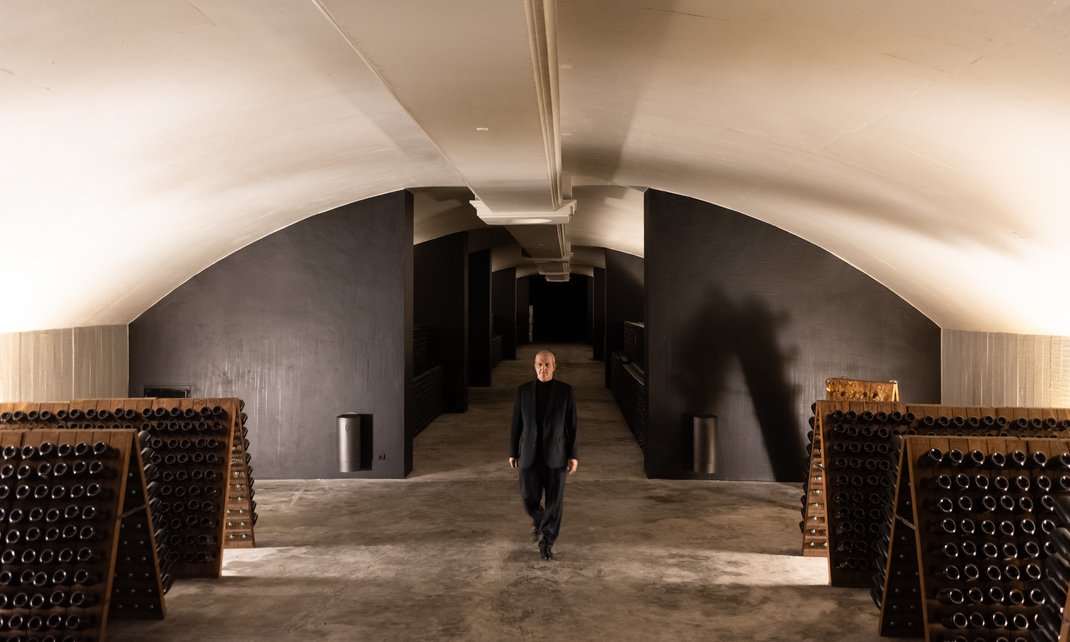 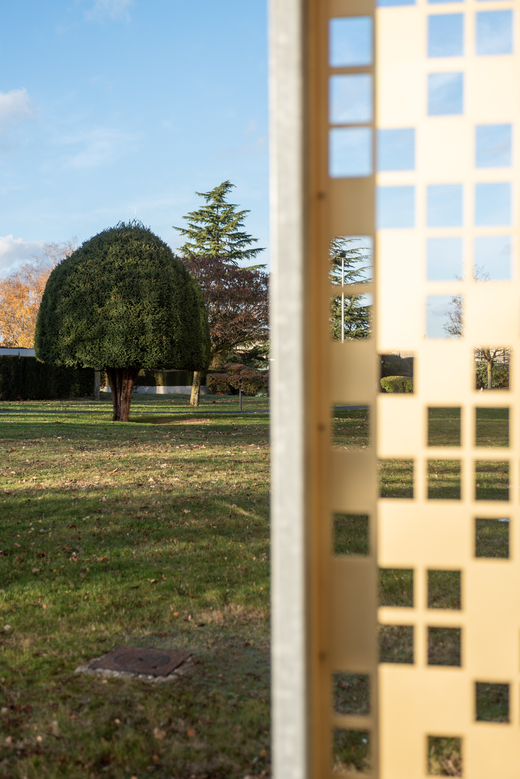 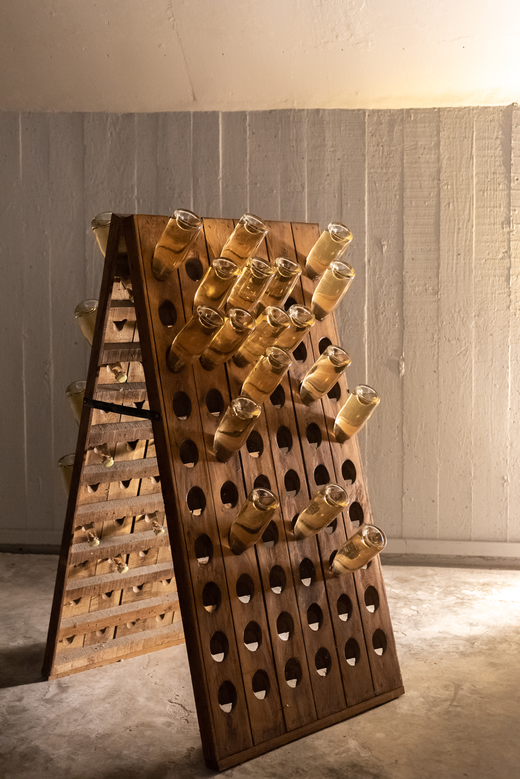 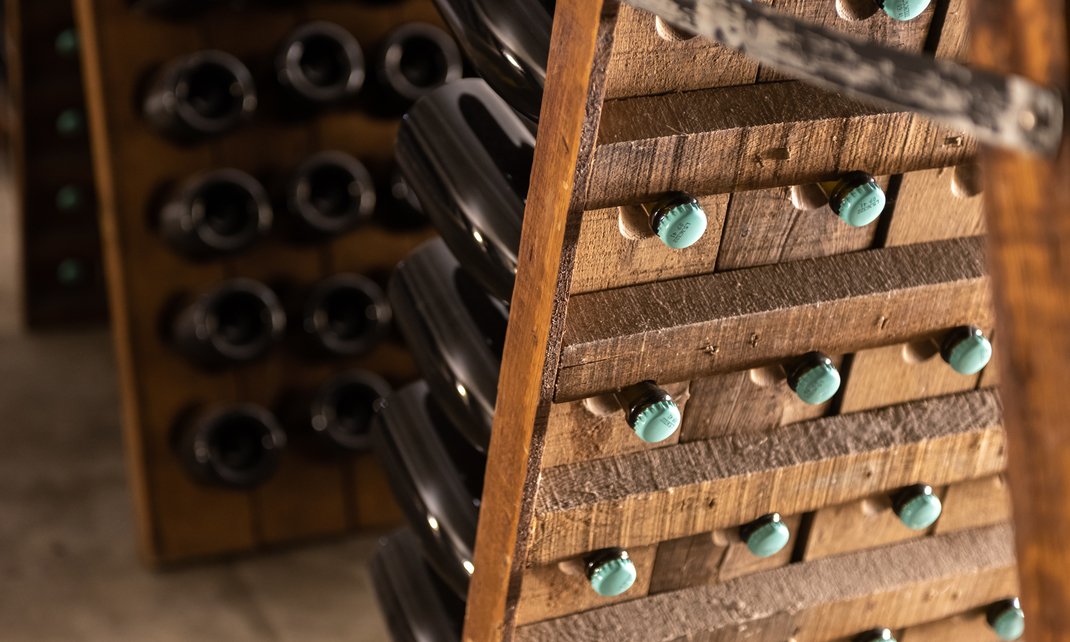 Could you tell us about the process of making a Champagne? What are we seeing when we look at the photos in the story?

The word we mainly use is “elaboration.” Come and treat yourself to a tour of our cellars! It’s utterly magical! You’ll discover the maturation cellars, where the bottles spend a minimum of eight or nine years before they are sold. At Rare Champagne, we take our time. Our time is precious. The maturation process is long, which is an essential element of Rare Champagne. Then comes the stirring, which is a delicate operation whereby sediment slides towards the neck of the bottle. It’s an art, and you need to see it for yourself. People watch wide-eyed; it really is an experience.

What is the potential for keeping each wine as it ages?

Every wine has its own potential. An appreciation of the history of each wine growing season helps to understand each vintage of Rare Champagne and identify its potential. It all depends on the Vintage.

Here we are in the Rare Chapagne cellar. Could you tell us about this exceptional collection of vintages?

Rare Champagne only has nine vintages. Eight white vintages, and a single rosé vintage to date. Each one of them was born of a struggle with nature. Nature is a capricious foe that the Head of Cellars is forced to fight with. It is a genuine struggle, but it is always interesting. I enjoy the challenge; there’s always something extraordinary. Each Vintage has its own character, yet on the other hand, you can always find the signature elements of Rare Champagne, which I am responsible for. I can’t tell you in advance what kind of Vintage I will create: nature sets the tone and I do the rest. 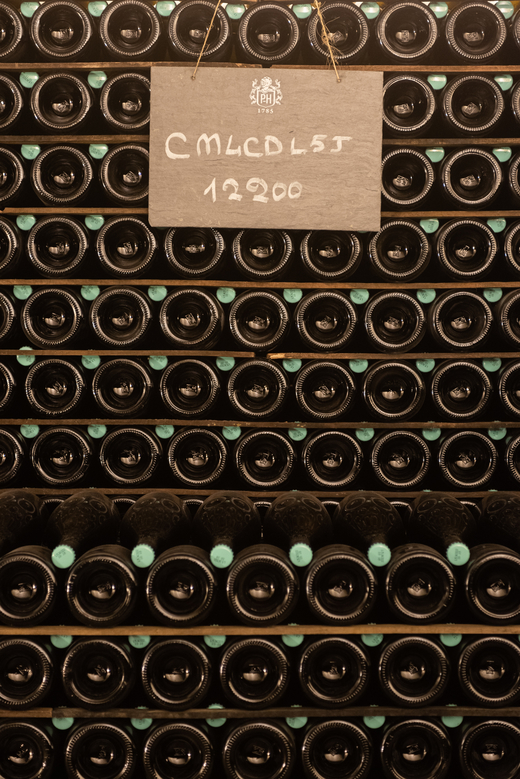 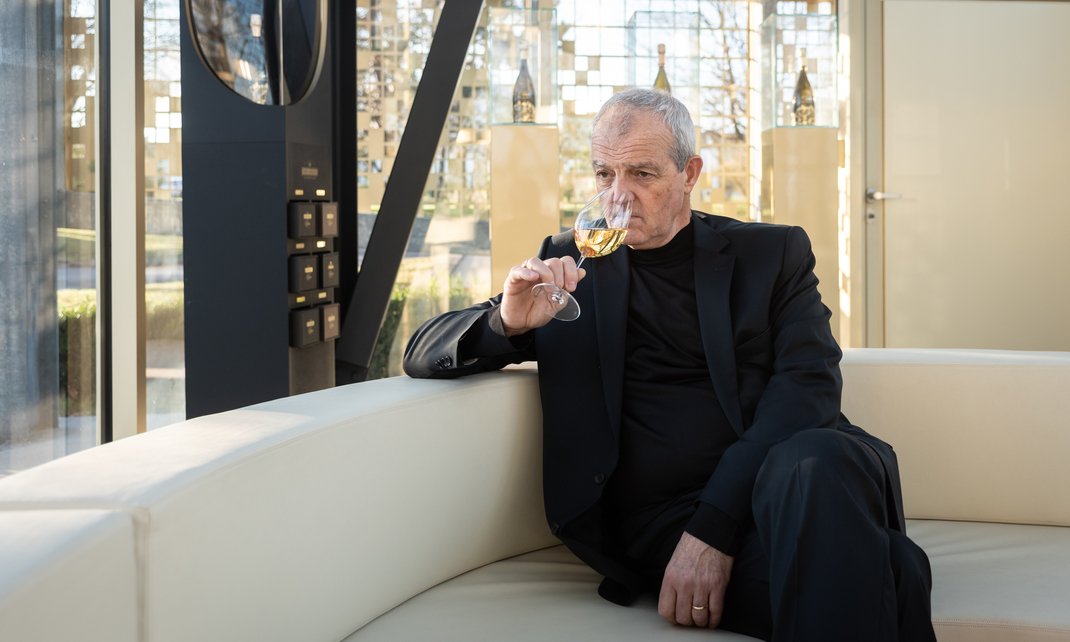 Rare Champagne only has nine vintages. Eight white vintages, and a single rosé vintage to date. Each one of them was born of a struggle with nature. 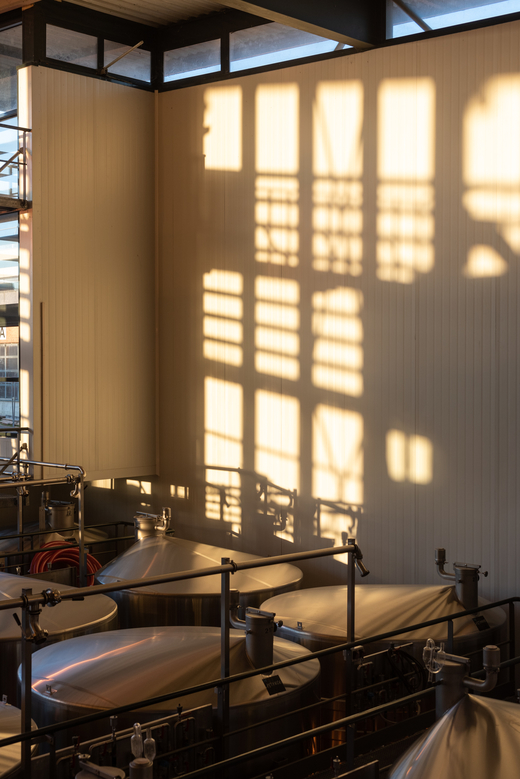 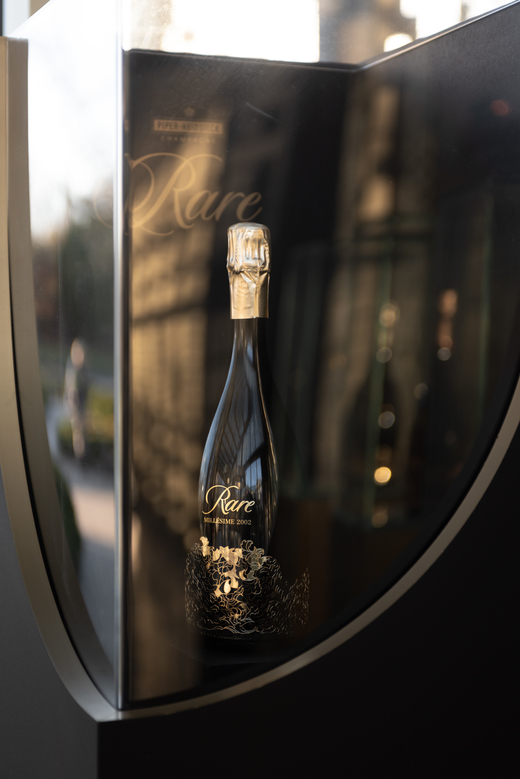 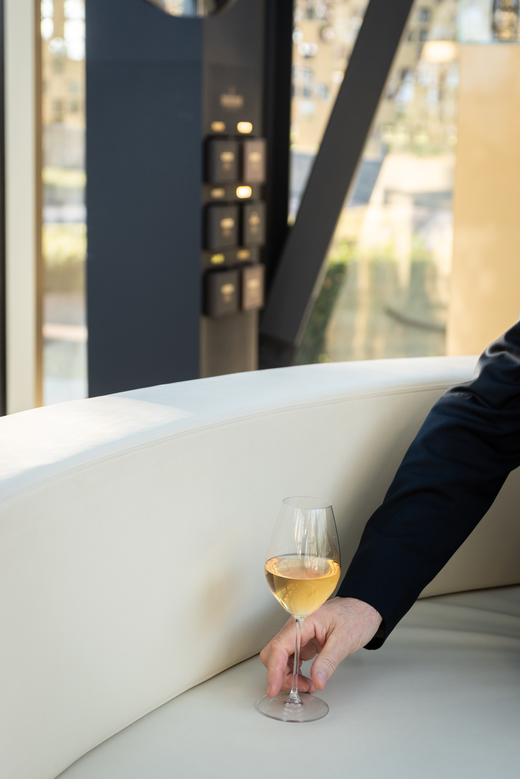 A huge amount of work is done on the bottles for Rare Champagnes. How do you come up with ideas for the bottles, and who do you work with?

The Rare Champagne bottle is proprietary to us. We call it the “Pinte Majeure” and no one else can use it. It’s a work of art and it used to be blown by hand. That’s why the bottle’s shoulders are asymmetrical. Today, it’s no longer hand-blown but we still chose to retain the asymmetrical shoulders. It is perfection in imperfection. Our Champagne House has been lucky enough to work together with three other houses of Haute Joaillerie, all of which are extremely prestigious: Pierre Karl Fabergé in1885, Van Cleef & Arpels in 1985 and Mellerio most recently, which created the sublime Rare Le Secret collection, which was displayed sold at Harrods in London, Galeries Lafayette in Paris and Takashimaya in Tokyo.

What’s your favourite part of your work?

My favourite part is tasting. When we taste the clear wine that is goes into the creation of to create Rare Champagne. I also enjoy tasting because it’s a highly emotional moment, where everyone’s senses are in a heightened state.It’s a privileged experience and always a source of wonder. We need to be in a state of communion with what we are about to discover.

More than just anecdotes, because it’s true that we have plenty of tales to tell in our field… instead, I’d prefer to talk about all the wonderful people I’ve met, often by chance, but so many exceptional encounters that I’ve had with people – both in Reims and in places like Tokyo, London, New York and Paris. Meeting someone new is an inspiration. It enriches the soul and the mind. 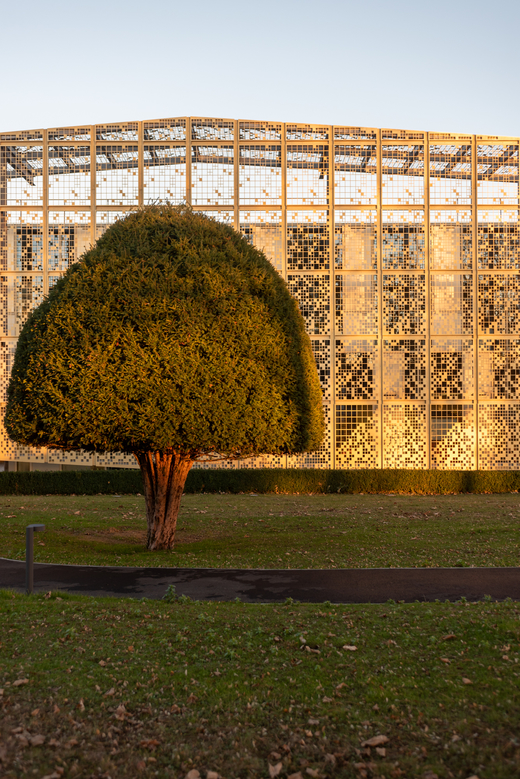 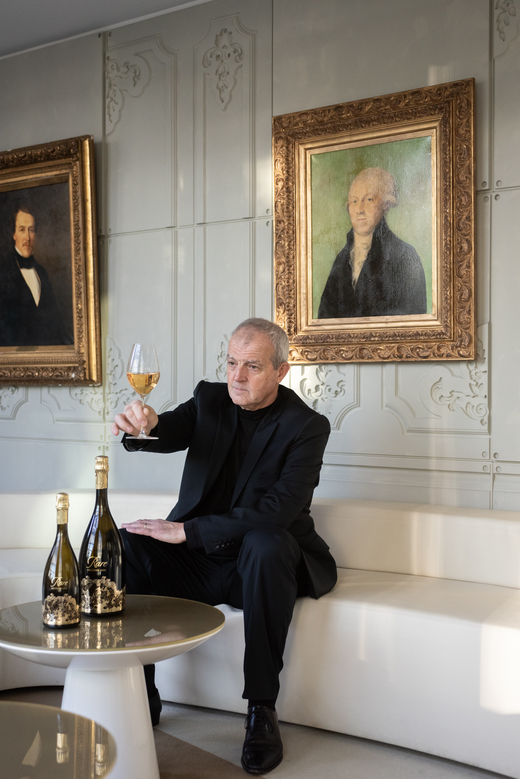 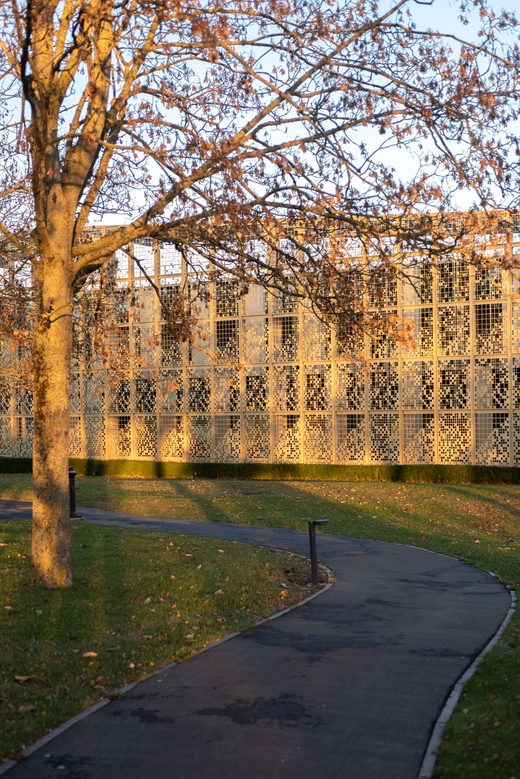 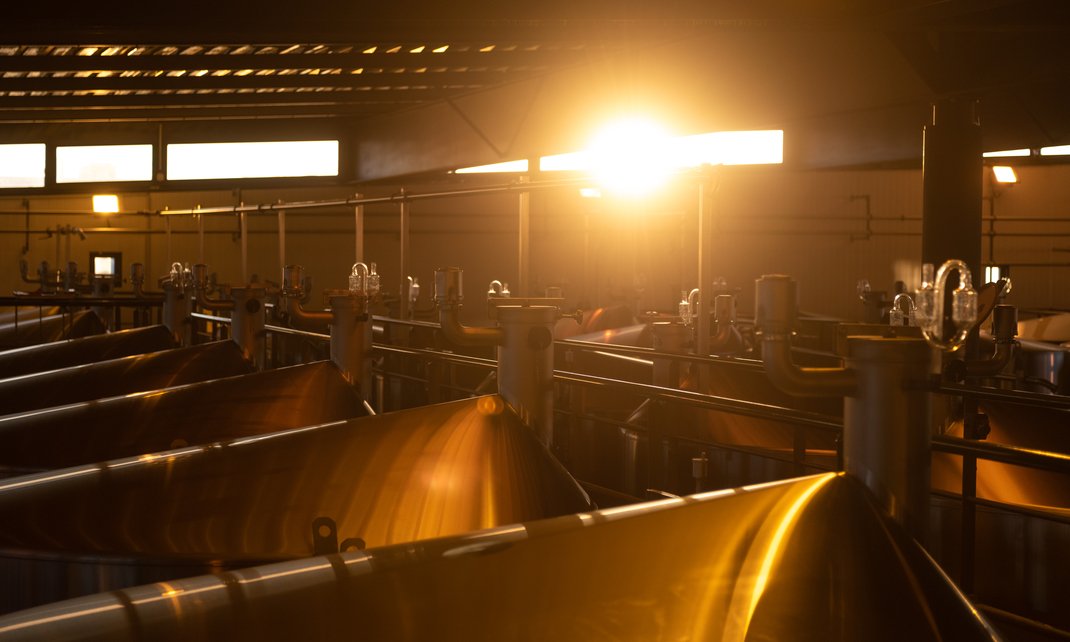 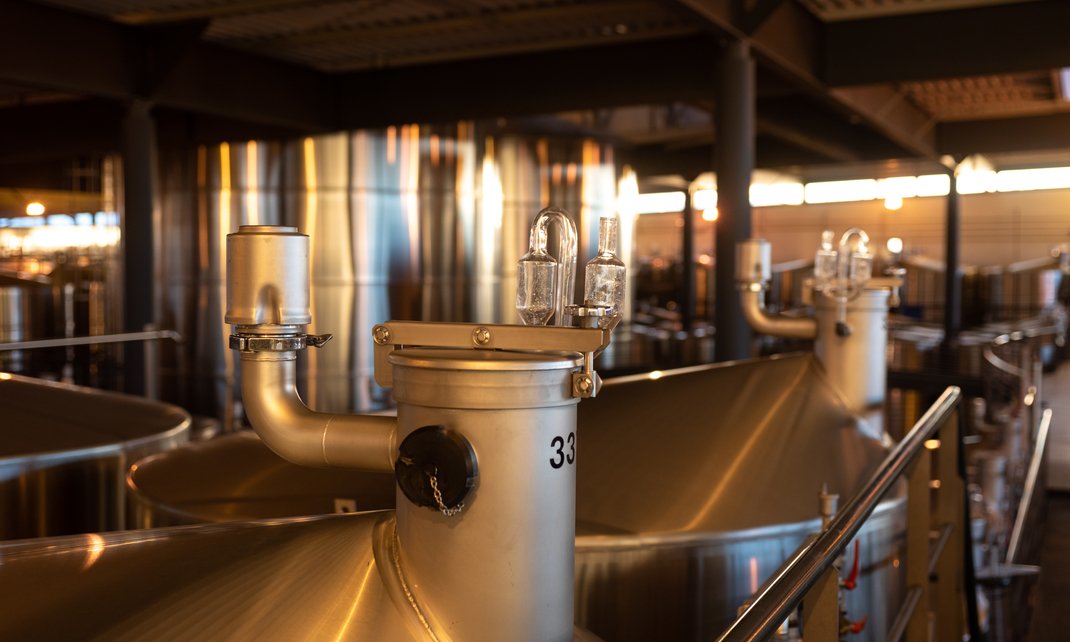 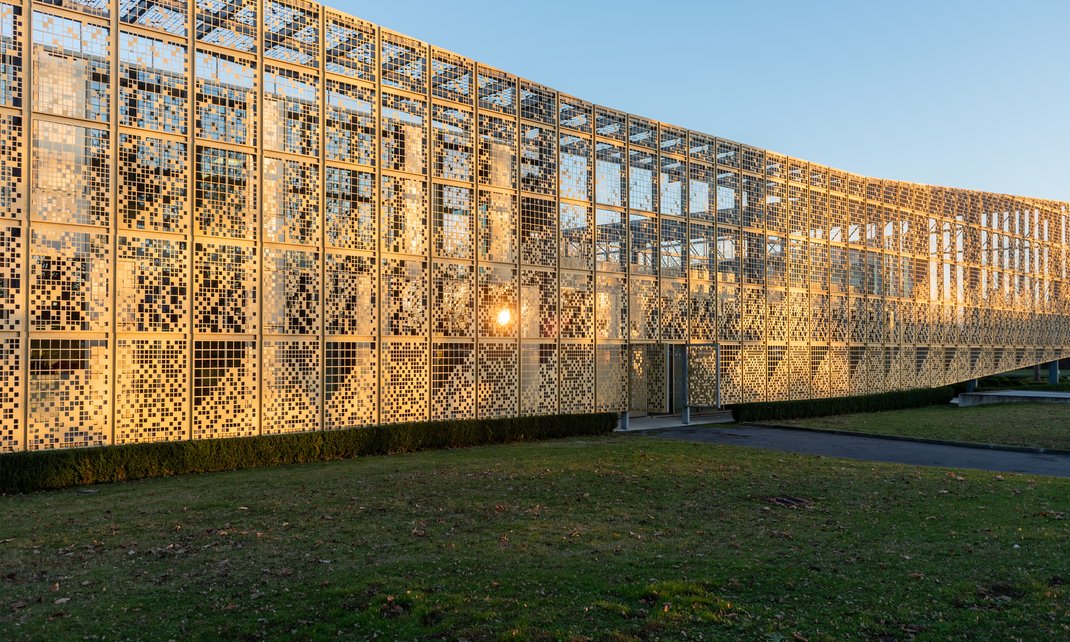 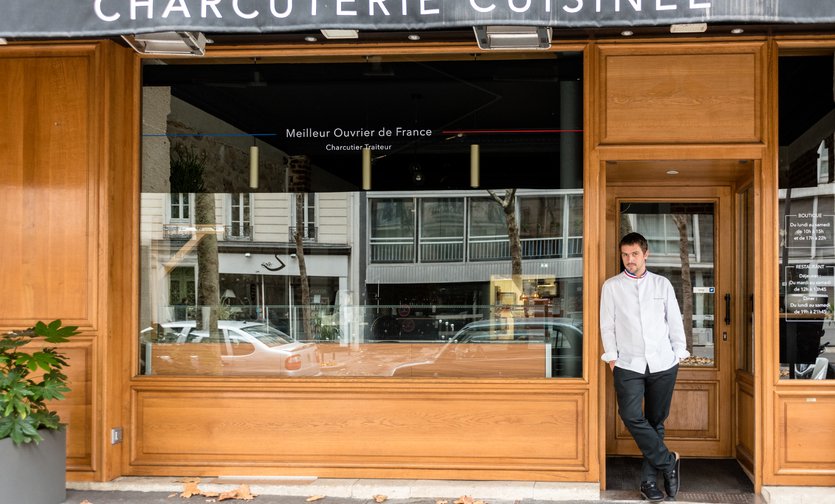 The Volkshotel, Another Way of Living...

Amsterdam is a city full of promise, especially when creativity is concerned. An inspiriting reality that the Volkshotel has fully...

“Good life, good work“, more than ever. Only two years after the opening of its first space, The Bureau – a luxury “co-working” space...

Confiture Parisienne, in Search of Lost...

Audacious and passionate, Nadège and Laura revisit a classic with Confiture Parisienne: the jam. Designed like a haute couture line,...